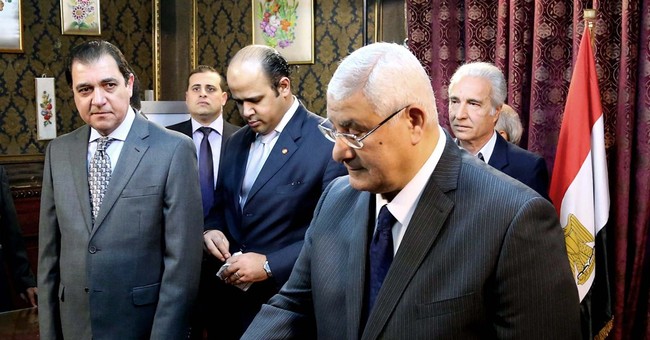 The recent fall of Fallujah, Iraq, to an Al-Qaeda-linked group provides an unwelcome reminder of the American resources and lives devoted in 2004 to 2007 to control the city – all that effort expended and nothing to show for it. Similarly, outlays of hundreds of billions of dollars to modernize Afghanistan did not prevent the release of 72 prisoners who have attacked Americans.

These two examples point to a larger conclusion: maladies run so deep in the Middle East (minus remarkable Israel) that outside powers cannot remedy them. Here's a fast summary:

Water is running out. A dam going up on the Blue Nile in Ethiopia threatens substantially to cut Egypt's main water supply by devastating amounts for years.Syria and Iraq suffer from water crises because the Euphrates and Tigris rivers are drying up. Growing the narcotic qat plant absorbs so much of Yemen's limited water supplies that Sana'a may be the first modern capital city to be abandoned because of drought. Ill considered wheat-growing schemes in Saudi Arabia depleted aquifers.

On the flip side, the poorly constructed Mosul Dam in Iraq could collapse, drowning half a million immediately and leave many more stranded without electricity or food. Sewage runs rampant in Gaza. Many countries suffer from electricity black-outs, and especially in the oppressive summer heat that routinely reaches120 degrees.

People are also running out. After experiencing a huge and disruptive youth bulge, the region's birth rate is collapsing. Iran, for example, has undergone the steepest decline in birth rates of any country ever recorded, going from 6.6 births per woman in 1977 to 1.6 births in 2012. This has created what one analyst calls an "apocalyptic panic" that fuels Tehran's aggression.

Vast reserves of oil and gas have distorted nearly every aspect of life. Miniature medieval-like monarchies like Qatar become surreal world powers playing at war in Libya and Syria, indifferent to the lives they break, as a vast underclass of oppressed foreign workers toils away and a princess deploys the largest budget for art purchases in human history. The privileged can indulge their cruel impulses, protected by connections and money. Sex tourism to poor countries like India flourishes.

Efforts at democracy and political participation either wither, as in Egypt, or elevate fanatics who cleverly disguise their purposes, as in Turkey. Efforts to overthrow greedy tyrants lead to yet-worse ideological tyrants (as in Iran in 1979) or to anarchy (as in Libya and Yemen). One commonly roots for both sides to lose. Rule of law remains a fata morgana.

Islamism, currently the most dynamic and threatening political ideology, is summed up by a morbidHamas declaration to Israelis: "We love death more than you love life." Polygyny, burqas, genital mutilation, and honor killing make Middle Eastern women the world's most oppressed.

The Middle East suffers from an urge to snuff out whole countries. Israel is the best known potential victim but Kuwait actually disappeared for a half year while Lebanon, Jordan, and Bahrain could be swallowed up at any time.

Middle Eastern states spend outsized amounts of their wealth on intelligences services and the military, creating redundant forces to check each other. They venture abroad to buy tank, ship, and plane baubles. They devote inordinate resources to chemical, biological, and nuclear weapons, and the platforms to deliver them. Even terrorist groups such as Al-Qaeda plot to acquire WMD. Cutting-edge methods of terrorism develop in the Middle East.

Economic and political failure creates large bodies of refugees; Afghans have made up the world's largest refugee population since the 1980s; Syrians now threaten to overtake them, sowing poverty and chaos in their lands of refuge. Desperate souls attempt to leave the region altogether for Western countries, with more than a few dying along the way. Those who make it bring their region's maladies to such tidy countries as Sweden and Australia.

Nineteenth-century diplomats dubbed the Ottoman Empire "the Sick Man of Europe." Now, I nominate the whole Middle East the Sick Man of the World. The region's hatreds, extremism, violence, and despotism require many decades to remedy.

While this process perhaps takes place, the outside world is best advised not to expend blood and treasure to redeem the Middle East – a hopeless task – but on protecting itself from the region's manifold threats, fromMiddle East Respiratory Syndrome (MERS) and harems to mega-terrorism and