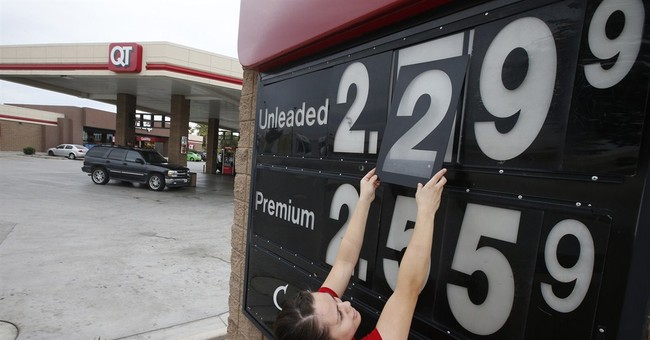 For most Americans, the annual Christmas journey to grandma’s house will be less expensive this year. Gas prices are at their lowest levels in five years, thanks largely to booming domestic oil production on state and private lands. That surge promises to put more money in our pockets—and perhaps more presents under the tree.

Some naysayers said Americans couldn’t do it. In 2012, President Barack Obama insisted, “we can’t drill our way” to lower gas prices.

But that’s exactly what we’ve done.

Gasoline prices fell to $2.37 per gallon on December 23, down more than 36 percent from $3.71 just a few months ago. Residents in Dallas, Oklahoma City, Phoenix and elsewhere are reporting prices under $2 at some stations.

Forget dreaming of a White Christmas—this year’s holiday season will be nothing but green.

Low gas prices amount to a tax cut for American families, adding disposable income that can be reinvested into the economy, used to pay down debts, or saved. Indeed, households can expect to spend $550 less on gasoline next year, according to the Energy Information Administration. Another analysis from IHS Global Insight predicts that families will save $750, on average, in 2015.

The benefits of affordable energy stretch far and wide. Automakers enjoy stronger sales; manufacturers save on transportation costs; and everyone from “airlines, refiners, trucking firms, the tourist industry and restaurants stand to benefit if lower prices are sustained,” according to The Wall Street Journal.

Poorer families, who spend a higher share of their income on energy, stand to gain the most. And the extra cash is particularly welcome as cold weather threatens to drive up home-heating bills—remember last year’s polar vortex?

Numerous factors have converged to bring lower gasoline prices, including flat demand and increased energy efficiency. But Americans looking to express gratitude for an early Christmas gift can address their thank-you cards to America’s energy producers and private property, where owners, rather than the government makes the decisions.

U.S. oil output hit 9.1 million barrels per day this month—the most oil we’ve pumped in almost three decades and a 78 percent increase since January 2008. As a result, oil prices have plunged to $55 per barrel, down from over $100 just a few months ago.

Santa may live at the North Pole, but the gift of lower gas prices is postmarked from places like Williston, North Dakota and Cotulla, Texas—where production from shale formations is booming. These and other “tight” oil plays have only become accessible in recent years thanks to the technological savvy and entrepreneurial spirit of America’s wildcatters, who combined horizontal drilling with hydraulic fracturing to coax oil out of dense shale rock. This “smart drilling” is what has made the difference.

Without America’s shale producers, we’d have much less to celebrate this holiday season. In July, even before gas prices began their rapid descent, renowned energy historian Daniel Yergin told an audience he was “convinced” that “we’d be looking at an oil crisis” and “panic in the public” were it not for America’s domestic energy boom. In fact, one study shows that U.S. production shaved almost $1 per gallon off gasoline prices in 2013, savings which have only multiplied since.

What’s more, our merry Christmas is likely to become a happy New Year. EIA predicts gasoline prices to drop even further, averaging just $2.59 per gallon in 2015, compared to this year’s average of $3.37.

Most Americans might not be thinking much about oil prices and energy markets over Christmas dinner. But the benefits of America’s domestic energy boom are real and profound—they are measured in less pain at the pump and more gifts from Santa. That should give us all a little more holiday cheer while reaffirming our thanks for living in a country where people believe in America, even when our leaders do not. Merry Christmas.