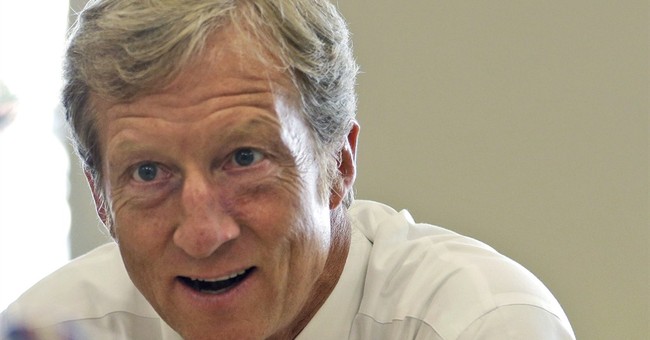 Journalists hate the idea of big-moneyed billionaires in politics throwing around their money like New Year’s Eve confetti. They’ve spent the last several years claiming that the left’s war against conservative donors Charles and David Koch was legitimate based on that attitude.

But they’re thrilled that one of the richest men in the world is considering a run for Barbara Boxer’s California Senate seat. Watch the media reaction to former coal baron Tom Steyer as he considers the Senate job from America’s most-populous state.

Steyer is a single-issue campaigner who has decided to make climate change the topic that propels him to higher office, even the presidency. So he outspent every other donor during the election with $74 million in contributions.

But he’s also a ridiculous hypocrite who built his mega-fortune of $1.6 billion (No. 383 on the Forbes 400 list) by buying up foreign coal. Then he turned around and used those dollars to try and manipulate the political process – first in California and then nationally.

No one can accuse the American media of consistency, especially when they can promote a lefty billionaire who just deployed jaw-dropping millions in an off-year election trying to defeat Republicans. Journalists are salivating about how much he might spend in 2016, perhaps even $100 million.

Steyer is fresh off a laughable disaster of a campaign, though not all outlets admit it. His operation originally predicted it would spend $100 million on the election, with Steyer kicking in just half. In the end, he funded most of it and his performance was less-than-stellar.

The Post said the “election results produced a stunning disappointment, and a low return on his $70 million investment.”The New York Times was even more cutting in its assessment. “Mr. Steyer appears to have largely wasted his time and money.”

Now that he’s running, that failure appears forgotten. “Steyer-backed Democratic candidates lost Senate races in Colorado and Iowa, and governor's races in Florida and Maine. But he scored wins in the Michigan and New Hampshire Senate races and the Pennsylvania governor's race,” wrote The National Journal.

In truth, Steyer lost big and had little if anything to do with those winning races. That’s despite tossing $4.5 million on 7,637 commercials last election just attacking his fellow billionaires the Koch brothers. Claiming Steyer “scored wins” is like giving fans credit for the Indy road win against the Denver Broncos. He was there, but didn’t impact the game.

And either way, the media depict him uncritically as a climate warrior. “Steyer has emerged as the darling of the environmental movement,” wrote Politico.

Steyer’s environmental record is so bad that even The New York Times was forced to point out the holes in it, back in July. But now those sins are papered over in green – piles and piles of Uncle Sam’s finest. Journalists will forgive almost anything if you are left-wing. And Steyer has the ideal liberal pedigree: upper crust upbringing, a regular-guy affectation and the same goofy style of tie he wears every day. Sometime around 2004 he even stopped going by Thomas. Tom is so much more presidential. It’s a marketer’s dream – or construct.

Steyer isn’t new to politics. He was considered for the Kerry administration had that disaster ever occurred. And he was rumored as a possible Obama Energy Secretary.

He’s created his own lefty operation – NextGen Climate – and bankrolled the liberal think tank Center for American Progress with $3.9 million. CAP is popular with top liberal donors including billionaire George Soros, who has given $8,067,186.

He’s a candidate only a newsroom could love. A perfect mix of big-money liberal and enough hypocrisy so journalists can relate to him. A nice reminder that when the left says it wants to keep money out of politics, it only means conservative money.