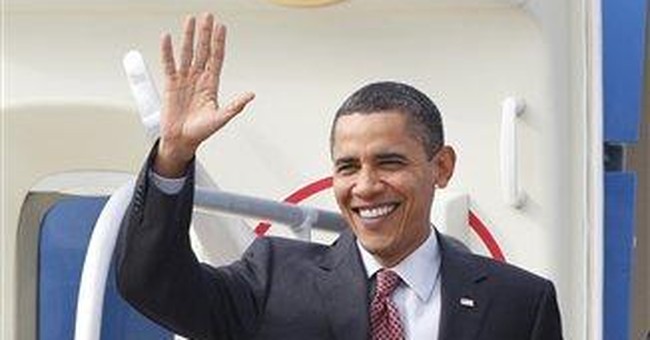 It’s been a year since the American public first said “I do” to Barack Obama and it’s still a honeymoon period for the mainstream press. The first year of marriage might have been a bit rocky, but journalists still have that crush on Obama.

The first time they ever really saw him speak, their hearts leapt. It was love at first sight. The media already had a betrothed who had promised them “Hillarycare” and taught them “It Takes a Village.” That all changed when Obama gave the keynote address to the Democratic National Convention in 2004. At ABC, Charles Gibson predicted: “Last night, a political star may have been born.”

In early 2007, as his presidential campaign wore on, more and more media types turned their back on their former love Hillary. They embraced Obama – none more than MSNBC’s Chris Matthews, whose “thrill going up my leg” became a permanent state of excitement for both him and his network.

Journalists were looking for a relationship – “Single journalists ISO return to Camelot coupled with PC racial sensitivity.” They spoke lovingly of his boundless optimism and gave a huge boost to his campaign. As the election neared, the media treated it like a coronation or an ascension. “People have called you ‘the savior,’ ‘the messiah,’ ‘the messenger of change,’” said NBC’s Matt Lauer to Obama just two weeks before the nation voted.

On Nov. 4, the wedding ceremony commenced. Like most spouses, the media promised to love Obama “for richer, for poorer, in sickness and in health.” Those two became major themes for the blossoming relationship. Soon after Obama was elected, the mainstream media began promoting his stimulus plan.

Journalists hid the biggest issues of the $787 billion package – how to pay for it. Less than 2 percent of the network stories showed viewers the money and they relied on stimulus supporters more than twice as often as anyone who had questions. NBC reporter Scott Cohn said that for one struggling Indiana community, the stimulus “could be a matter of survival.”

This wasn’t just an economic relationship. Journalists had a schoolgirl crush – eager to see their man playing basketball, talking to the press or vacationing. “Fit to serve: Barack Obama photographed shirtless in Hawaii and a lot of women are giving him the presidential seal of approval,” gasped NBC’s Matt Lauer at the beginning of the “Today” show Dec. 23.

Then came the inaugural events – filled with lefty Hollywood stars mingling with their East Coast political allies. Millions flocked to D.C., urged on by a media eager to see others stand by their man. ABC’S Bill Weir captured the event as no other, claiming “never have so many people shivered so long with such joy.” That wasn’t enough. Weir looked heavenward for hyperbole to bolster the “World News” faithful. “From above, even the seagulls must have been awed by the blanket of humanity.”

Their prince had come and journalists showered him with praise. Nowhere was the love been stronger than in Time magazine, which has featured the president’s photo on 20 covers – seven of those since his election. He’s been husband Obama, Dr. Obama and FDR Obama. So far, superhero Obama was saved for comic books, where the president actually appeared with an adoring Spiderman.

But a few fractures appeared in the relationship. Protesters held tea parties bashing the crazed spending of the new president and even though the media gave them little attention, the word got out. Even a few liberal media types like CNBC’s Jim Cramer complained that hope and change were hurting the economy.

The Obama administration lashed out, making it plain that it demanded unconditional love. The White House heaped particular abuse on the few in the media who just weren’t that into him – Fox News and conservatives like Rush Limbaugh.

With stimulus done, Obama tried to ram through health care reform but met new opposition during congressional town hall meetings. The media sided with him again. Network reporters took their cue from the president and exaggerated the number of uninsured to 46-47 million. Then they lowered it when he did. News stories followed a predictable script – emphasizing reform supporters and ignoring costs. In one memorable love fest, ABC turned over its network to Obama for a “serious conversation.” Viewers got more of a monologue, with 60 percent of the show controlled by the president.

By the end of a year, the relationship became one sided. The White House, like a nagging shrew, began picking at the flaws it saw in the press. The Associated Press and others were lambasted for criticizing Obama as talk of an enemies list filled the news.

Now comes their first anniversary. Somewhere along the way the bride who had the hope chest filled with change became the bride of Frankenstein. The media still love him and sing his praises. They just don’t recite “Barack Hussein Obama” like some New Jersey school kids. This anniversary, the “Wedding Song” has been replaced by Taylor Swift’s “You Belong with Me.”