My Concern About the US Economy Is Still True Today

Dan Celia
|
Posted: May 08, 2019 9:14 AM
Share   Tweet
The opinions expressed by columnists are their own and do not necessarily represent the views of Townhall.com. 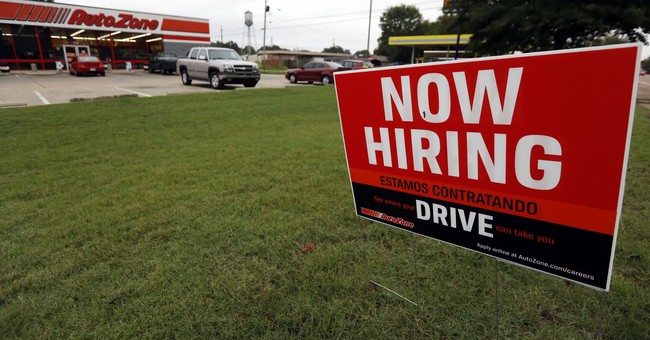 More than a year ago, as the economy was moving along at a healthy rate, I warned the American people that “The Freight Train of the Economy Could Be Derailed.” My concern was that as the American economy added more jobs at a steady pace, eventually the time would come when the needed skilled laborers to fill those job openings would meet a dead end. Despite all the strong numbers in the economy, my concern from over a year ago is, in fact, still true today. We need a constant flow of skilled laborers to fill the 7.5 million job openings.

Indeed, the economy is looking great. As the latest reports on economic numbers tell us, with productivity soaring to 3.6% in the first quarter and 263,000 jobs added in April, we have a very hot economy. Along with that positive growth, are other numbers supporting the strength of this economy thanks to tax cuts and deregulation.

That said, I must reiterate a key point I voiced in a column over a year ago. This impressive growth still needs an adequate workforce and controlled debt. For over a year, I’ve been calling on the administration to focus on immigration legislation that will allow qualified workers who wish to assimilate into the American culture an opportunity to fill those jobs. Unfortunately, little to no progress has been made on this front. There is no possible way, without some of the things I’ve indicated in that article, we will continue to have sustainable, efficient growth that will continue to lead to American prosperity.

Crucial to a growing and thriving economy is an adequate workforce and the required skilled workers to sustain a growing economy. Strong, legal immigration legislation is needed now to streamline the legal immigration process. Right now, more than enough workers are willing to contribute to the American economy, but between bureaucratic costs and regulatory burdens, it is very difficult to execute the legislation needed to convert aspiring immigrants to participating citizens in this growing economy.

This freight train of an economy has only picked up more momentum as indicators unceasingly improve, much to the chagrin of the mainstream media. As some of these media attempt to portray a vulnerable economy simply to downplay the Trump administration’s success, the old adage of “numbers don’t lie” has the left scrambling.

As if that news wasn’t good enough, the April jobs report hit last Friday with news that American companies added 263,000 new jobs in April, blowing past Wall Street expectations of 190,000, CNBC also reported. Additionally, the unemployment rate fell to 3.6%—the lowest in a half-century, since December 1969.

On May 3, Robert Kaplan, Federal Reserve president for the Dallas district, said, “I think it’s still my view that we are running out of the capacity in the workforce. We are bringing people in off the sidelines. But we are starting to approach prime rates of participation pre-crisis and we are reaching pre-recession lows on discouraged workers in a good way. I would expect it’s going to slow down but I don’t think it’s going to be a bad sign.”

My greatest fear is that a labor shortage will be one of the main catalysts that derails the economy. As great as all the economic numbers are, it won’t be sustainable if the country lacks enough workers to keep the economy going. Our concerns should not lie in higher inflation or spiked interest rates, but rather in the diminishing supply of skilled workers. This is where a sound legal immigration process comes in. Yes, we need all of the necessary vetting for national security purposes, but we also need our legislators to come to agreement quickly.

Finally, the Left is beginning to acknowledge the reality of the border crisis. This may finally get them to see things through the same lens as the right and hopefully an agreement can be reached. A Washington Post-ABC poll found that 80% believe the situation at the U.S.-Mexico is a serious problem that needs to be addressed, and that 17% more Democrats since January of this year see the border situation as a crisis that needs to be resolved.

Both sides need to find the common ground to accept a solution that keeps us safe and sustains our bourgeoning economy into the future.