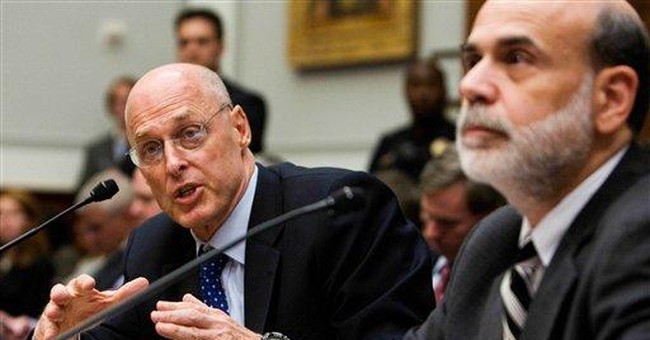 In the early days of the first Reagan Administration, an issue before the Cabinet was a financial crisis at the International Monetary Fund. They had come to Washington, hat in hand, asking for $4 billion dollars to replace that which had been lost due to fraud, incompetence and downright theft. President Reagan quite properly opposed the bailout, until heavily pressured by Treasury Secretary Don Regan and OMB Director David Stockman, he reluctantly gave in.

A conservative in attendance watched and later shook his head sadly, saying Reagan would have been better served if he just governed from inside a White House closet, away from the pressures of those advocating the status quo of K Street and Wall Street. Reagan was of course correct about the IMF bailout. The American tax dollars Don Regan argued for were promptly lost, once again, because of dishonesty and malfeasance.

Fortunately for America and conservatism, Reagan most often followed his own instincts and intellect and most believe we are better off for it.

Now is the time to confront the brutal truth of what is wrong with the Republican Party. Or as Reagan said of Jimmy Carter in 1980, “A man who tells you he enjoys a cold shower in the morning will lie about anything.”

And now, Big Government Republicanism has brought us the most massive bailout in American history, rewarding those who created this mess with a “Country Club Safety Net.” The great longshoreman-philosopher Eric Hoffer once said what starts out as a movement eventually becomes a business and then descends into a racket. The Republican Party at present is little more than a racket.

For many years, the conservative movement and the GOP operated as separate and apart from each other. Only after the collapse of the GOP after the corruption and betrayal of conservatism by Richard Nixon did conservatives take over the GOP and transform it from a Tory-style party in which power moves downward the status quo is always defended into an America-style populist movement in which power flows upward and the status quo is always challenged.

The organizing principle of “Freedom” around which the conservative philosophy was organized has been discarded by the GOP over the past eight years only to be replaced by the concept of “Security.” This did not begin on September 12, 2001as the Bush Administration was already on a path to reject Reaganism. September 11th only served as a catalyst and justification for the most massive growth of government --- accompanied by an expanded police state --- in the history of the Republic.

The argument confronting the great middle class of America---who only stand to go into greater debt if this bailout is passed---is that yes, you have behaved responsibly, paid your mortgages on time. But unless you fork over $10,000 per household to those who should have never given 1.9 percent mortgages and those who should never have been granted 1.9 mortgages, we cannot guarantee you financial security. For most Americans, this bailout is little more than extortion, a 21st century “corrupt bargain.”

The security philosophy of the GOP new extends to Wall Street, whose argument is simply to ask the taxpayers to help Wall Street protect itself from---itself. Republicanism may be beyond ideology as one K Street lobbyist recently argued. But conservatism certainly is not. Russell Kirk said, “From the moment I began to reason and possibly the hour I began to feel, I have been a conservative.” True conservatives have reasoned that this bailout is a bad idea.

Some have argued that the GOP needs to move on from Reaganism but this is akin to saying Americans should abandon the ideals of Jefferson and Lincoln, who like Reagan, embraced the expansion of freedom. After all, if Barack Obama can invoke Reagan, surely Republicans still can. American conservatism---Reaganism--- is alive and well, knows what it believes, and stands for. It is not elitist, it is populist; it is moral and not relativistic. It is hopeful, not cynical, egalitarian, and not hierarchical. The two, Republicanism and Conservatism, are now separate and apart, competing philosophies, not complimentary.

The Bush Administration’s proposed bailout is good for the elites and the cynical. It is not so good for the productive members of society. Some conservatives in Congress are commendably standing up to the enormous pressure being brought to bear on them they know this is a “Panama Canal” moment for the GOP as it will forever stain those who support this massive expansion of governmental power. Those conservatives with the courage to oppose this will be stamped with honor.

They know this bailout may pass but they also know that any Republican who supports it can never again call themselves a conservative.