Lifting the Burden of an Expansive Regulatory State

Congressman Bob Gibbs
|
Posted: Apr 18, 2016 12:20 PM
Share   Tweet
The opinions expressed by columnists are their own and do not necessarily represent the views of Townhall.com. 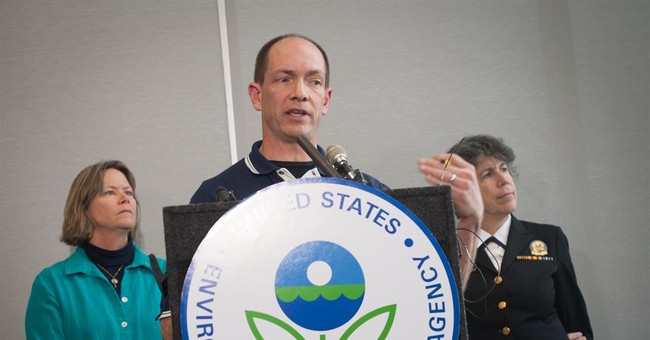 Once again, the Obama Administration finds itself in court defending unilateral actions that are unconstitutional.  Last month, the Supreme Court of the United States heard oral arguments in a case over the Clean Water Act, the Army Corps of Engineers, and what legal weight a “jurisdictional determination” has.  The Hawkes Company, which harvests peat in Minnesota for golf courses, wanted to sue when the Army Corps used jurisdictional determination to declare an area of land 120 miles away from any navigable water subject to a costly permitting process for development or changes to said land. The Corps argues that any citizen or entity must go through the permitting process before a legal appeal can even be filed.  Hawkes disagreed and filed a lawsuit claiming that the Administrative Procedure Act allows a lawsuit in this case, as the jurisdictional determination is a final agency action.

The real issue at the heart of the matter is the expansion of the regulatory state and the transfer of power from the people and their representatives to a phalanx of unelected bureaucrats.  The federal government we have now is too large, it costs too much and, most importantly, it is working for its own benefit rather than for the people. The Obama Administration has increasingly seen fit to bypass Congress, and the American people that we represent, in proposing and finalizing rules and regulations that impact small businesses, hurt American families and undercut the authority of the states themselves.

The consequences of an unbridled regulatory regime are not always obvious. There is no “regulation compliance” item on your dinner bill or supermarket receipt. However, the compliance costs of federal regulations totaled nearly $2 trillion in 2012 according to a study commissioned by National Association of Manufacturers. These regulations and the compliance required are not simply the expected costs of doing business. They are passed on to people who struggle to pay their electric bill, to family farms burdened by the EPA’s war on water, and to small businesses trying to provide retirement savings help for employees.

As a result of the Department of Labor’s new fiduciary rule, many Americans will have fewer options when trying to sock away a portion of their paycheck for a comfortable retirement.  When the Environmental Protection Agency creates a new rule meant to bankrupt the coal industry, Americans can expect to pay more for their electricity while coal miners are laid off.  Similarly, the EPA’s Waters of the United States rule causes more confusion and increases federal jurisdiction beyond the intent of Congress and the rulings of several Supreme Court decisions.  These actions hurt good people who run family farms, who struggle to make a living while doing everything they can to protect the land and water they use to feed you and I.

The Hawkes case, argued recently in front of the Supreme Court, further illustrates the point not just of the EPA’s power-grab, but the recalcitrance of the bureaucracy when being challenged by the people. At every turn, hardworking Americans looking to start a business, trying to pay their monthly utility bills or live out their version of the American Dream are slowed by government interference.

This has not gone unnoticed by the House of Representatives.  We have worked tirelessly on legislation aimed at removing the barriers that limit Americans’ access to success in their life, however they measure it.

Efforts like the REINS Act places restrictions on an unelected bureaucracy. It requires that major rules that have a significant impact on our economy and on the American people be voted on by Congress--a simple up or down vote that gives the representatives of the American people the final approval on rules that could drastically affect their lives and their livelihoods.

I personally have made it a priority to take on agencies that have distorted the letter and spirit of the law to expand their authority at the expense of state and local entities.  The House has been working hard to pump the brakes on several costly EPA regulatory programs.  When it comes to keeping our nation’s waterways clean and open for business, it is important that the states be treated as the partners they are intended to be, rather than adversaries.  It’s why we have been fighting to tackle the regulatory overreach of the EPA’s Waters of the United States rule.

Finally, we’ve taken our efforts to preserve the separation of powers spelled out in the Constitution to the courts.  The President’s unilateral actions on immigration prompted the State of Texas, leading twenty-five other states, to challenge the actions’ constitutionality. Last month the House voted to authorize House leadership to file an amicus brief in support of Texas, arguing that the President is not adhering to the Take Care Clause of the Constitution.  By selectively enforcing our nation’s laws, the Administration is contributing to the hardened partisanship that has paralyzed Washington and damaged Americans’ optimism for the future of our nation.  This amicus brief is part of a larger effort to rebalance the relationship between the executive and legislative branches. Recently, it was announced that the House will have the opportunity to present its case in support of the states during oral arguments next week.

Unfortunately, breaking the cycle of failed policies that perpetuate the status quo will take a new president.  Until that happens, Republicans in the House are committed to putting forward a bold agenda, one that will spell out commonsense policies that gives Americans the opportunity to reach beyond their current situation. We all want an America that provides every generation the opportunity to leave a confident and more prosperous nation for their children and grandchildren and should be inspired by our history to provide those opportunities.  But it should be apparent that Washington’s bureaucratic red tape and the expansion of the regulatory state make it more difficult for Americans to even dream of achieving that.