The Dubious Deal of the Century 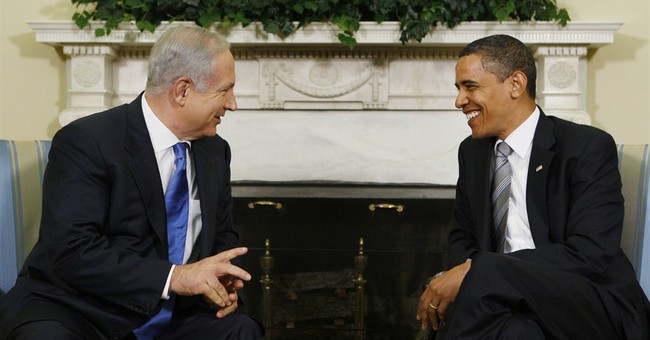 Remember when President Obama’s spokesmen said that striking a bad deal with Iran would be worse than striking no deal at all, and that a good deal means Iran dismantles its nuclear weapons programs?

At this point, it’s all but certain that Mr. Obama is prepared to accept a deal that will be dangerous for America and the West – and, yes, life-threatening for Israel. For Iran’s rulers, by contrast, it could be the deal of this young but already bloody century. Based on reports and leaks, the agreement now on offer will leave intact most of Iran's nuclear infrastructure, along with its intercontinental ballistic missile program and its ability to continue stonewalling on weaponization research.

In exchange, Iran’s Islamic revolutionaries will pledge to remain months – not years -- from the threshold beyond which they can make nuclear warheads. They are to keep that distance for roughly ten years. Expect Mr. Obama to say we will know if they violate the agreement and that we will have time to take action should that happen.

His confidence ignores the intelligence community’s record when it comes to Iran, as well as Iran’s history of deception and continuing refusals to open its military programs to international inspectors.

The deal also is likely to include a “sunset” clause: In about ten years, the clerical regime will be able to build an industrial-size nuclear program with hundreds of thousands of centrifuges and multiple plutonium reactors that will give the mullahs an easier path to a “breakout” or clandestine “sneak out.” Iran’s nuclear program will be under the same minimal constraints as those of Holland, Japan and Germany -- democracies that have never pursued nuclear weapons.

Mr. Obama appears to believe that Iran is evolving into a responsible power. No evidence suggests he’s correct. What is evident: Sunni nations such as Saudi Arabia, the UAE, Turkey and Egypt fear Iran, and are likely to develop their own nuclear capabilities. In other words, we are heading toward multiple nuclear weapons-capable countries on a hair trigger in the most volatile region of the world. Try leading that march from behind.

According to the government Mr. Obama heads, Iran remains the world’s leading sponsor of terrorism and a chronic violator of fundamental human rights at home. It has been attempting to establish hegemony over its Arab neighbors, and has repeatedly threatened Israelis with genocide. “Death to America!” remains the regime’s rallying cry.

The U.S. and Iran do have a common enemy in the Islamic State. But the U.S. and Iran also had a common enemy in Saddam Hussein. Americans fought and died – in many instances killed by Iranian-backed Shia militias – and eventually prevailed, standing up “a stable government in Iraq that is actually moving toward a representative government,” as Vice President Joseph Biden phrased it in 2010. Then President Obama withdrew U.S. forces from Iraq. Predictably, a power vacuum opened. Predictably, Iran filled it.

Supreme Leader Ali Khamenei encouraged not just sectarianism but the oppression of Iraqi Sunnis by Iraqi Shiites. That helped revive al Qaeda in Iraq, an organization that had been shattered by the “surge” led by Gen. David Petraeus. With not even a residual U.S. military force left behind following the American withdrawal, we could only look on helplessly as al Qaeda in Iraq morphed into the Islamic State, a self-proclaimed caliphate that now rules significant swaths of both Iraq and Syria, with affiliates in the Sinai, Libya and elsewhere.

That’s not all: My colleague, Thomas Joscelyn, a senior fellow at the Foundation for Defense of Democracies, has highlighted documents seized in the raid on Osama bin Laden’s safehouse in Pakistan and just released by prosecutors in New York as evidence in a trial against a terrorism suspect. These documents confirm that Iran’s rulers have continued “to collude” with al Qaeda. What’s more, Mr. Joscelyn writes, “terrorists directly tied to al Qaeda’s Iran-based network have plotted attacks in the West on three occasions since Obama took office.”

So in addition to worrying that Iran’s rulers will use nuclear weapons or give them to Hezbollah, their proxy, there is now reason to believe they might provide a bomb to al Qaeda.

Remember when such an idea – the U.S. allowing an al Qaeda collaborator to acquire nuclear weapons -- sounded crazy?

It would direct President Obama to submit such an agreement to Congress and prohibit him from suspending congressional sanctions for 60 days. During that period, Congress could hold hearings and “approve, disapprove or take no action on the agreement.”

“The content of any final deal is of great significance to the national security of the United States, our allies, and to international peace and stability,” said Mr. Kaine, adding that he hopes “to work with my colleagues to provide support for a diplomatic deal that effectively ends Iran's nuclear ambitions.”

Remember when Mr. Obama was saying the same? On Saturday, one of his spokesmen said he would veto the bill.