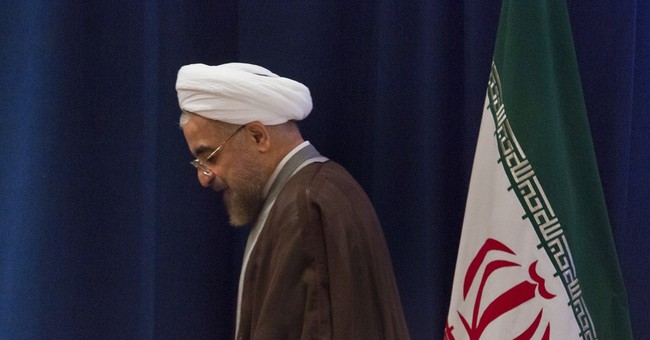 In his address to the UN General Assembly last week, President Obama called the conflict in the Middle East “a fight no one is winning.” I think the evidence suggests he’s wrong. I think Iran is making significant gains.

That should distress us because the Islamic Republic, no less than the Islamic State (also known as ISIS and ISIL), is committed to waging jihad. Iran’s 1979 revolution was led by Ayatollah Ruhollah Khomeini -- a Persian, Shi’a, Islamist version of Lenin. His intention: to spark a global uprising against the West.

Khomeini championed social justice – of a sort. “If one permits an infidel to continue in his role as a corrupter of the earth,” he said in a 1984 speech celebrating the birth of Mohammed, “the infidel's moral suffering will be all the worse. If one kills the infidel, and this stops him from perpetrating his misdeeds, his death will be a blessing to him.”

My colleague Mark Dubowitz observes that Obama has gone from "dismantle and disclose" to "disconnect, defer and deter.”

In other words, the president had been demanding that Iran’s rulers dismantle key elements of their nuclear program and disclose past weaponization activities. Now, he appears prepared to settle for disconnecting some centrifuges or reducing the uranium gas fed into them (both easily reversible), deferring demands that Iran’s rulers admit past weaponization until after a deal is signed, and hoping that breakout to nuclear weapons can be deterred through enhanced inspections and whatever economic leverage the West retains – probably not much since a senior official in charge of the negotiations is already promising to suspend major sanctions soon after a deal.

Obama’s retreat also is reflected in his rhetoric. A few years ago he was vowing to use “all elements of American power to prevent Iran from developing a nuclear weapon.” Last week: “America is pursuing a diplomatic resolution to the Iranian nuclear issue. This can only happen if Iran takes this historic opportunity. My message to Iran’s leaders and people is simple: do not let this opportunity pass.” Opportunity?

This should be big news. Among the reasons it is not: The Islamic State’s flamboyant barbarism has been consuming the oxygen, making it easy to forget that Iran has long been, according to the US State Department, the world’s leading state sponsor of terrorism.

It was Iran’s rulers who instructed Hezbollah, their Lebanon-based militia, to bomb the U.S. Marine barracks in Beirut in 1983. It was Iran’s elite Quds Force that was implicated in the unsuccessful 2011 plot to blow up a Washington DC restaurant. Since 2003, Iran and its militias have, with impunity, killed as many as 1,000 American soldiers in Iraq.

Right now, both the Quds Force and Hezbollah have “boots on the ground” in Syria, fighting in support of the Assad regime. They have been responsible for a high percentage of the 200,000 deaths there over the past three years.

Saeed Abedini, an Iranian-American Christian pastor, has spent more than two years in Iranian prisons, charged with "attempting to sway Iranian youth away from Islam.” Arizona-born Amir Hekmati, a former U.S. Marine who went to Iran in 2011 to visit his grandmother, remains incarcerated on charges of spying for the CIA. Robert Levinson, a private investigator and former FBI agent, has been held in Iran since 2007.

Iran has ranked “among the world's top three worst jailers of the press every year since 2009,” according to the Committee to Protect Journalists. Among those being held: Washington Post correspondent Jason Rezaian and his wife, Yeganeh Salehi, also a reporter. Arrested in July, they have yet to be charged with any crime.

Iran’s rulers don’t like the Islamic State – it’s a Sunni rival – but they are largely responsible for its growth. “At Iran's behest, Nouri al-Maliki's Shiite-led government in Iraq systematically arrested, tortured and murdered members of that country's Sunni minority,” wrote Adam Ereli, former U.S. ambassador to Bahrain. Such policies, “paved the way for the stunning political and military conquests in Iraq by Islamic State terrorists.”

It was Obama’s withdrawal from Iraq– with not even a residual force left behind – that made it possible for Tehran to start calling the shots in Baghdad. And his passive response to the Assad regime’s brutal crackdown on peaceful protesters in 2011 created the vacuum that soon was filled by foreign jihadis.

At this point, dropping bombs on Islamic State fighters is a treatment – not a cure. Worse yet: The current campaign could succeed in weakening the Islamic State while strengthening the Islamic Republic. If that happens, if Khamenei achieves his ambition to become the world’s first nuclear-armed jihadi, President Obama will be responsible for a blunder of world-historical proportions -- one that will shape the remainder of this century.

Not much time is left to avoid that outcome. Negotiations with Iran are to conclude Nov. 24. The president would be wise to make clear that no agreement is preferable to a bad agreement. Such a decision will require courage, resolve and recognition that negotiations, like wars, do produce winners and losers, and that it matters which the United States turns out to be.