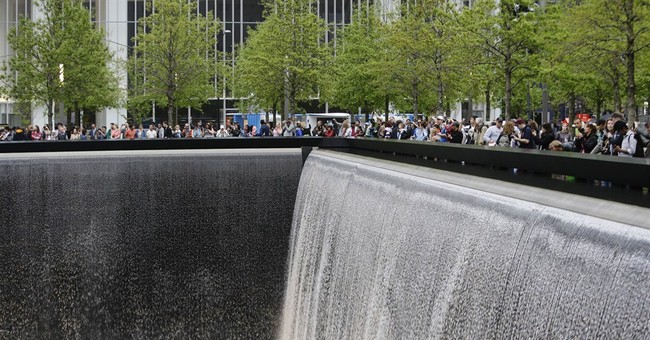 Do not call what happened 13 years ago this week a tragedy. It was a terrorist atrocity, an act of war and a war crime. Very different.

The self-proclaimed jihadis responsible for hijacking commercial jets and using them as missiles targeted the World Trade Center because it was a Western financial capital, a place where men and women of many ethnicities and religions worked in peace to create prosperity. Another plane was flown into the Pentagon -- brains of the greatest liberation army the world has even known. One more jet was meant to hit the political heart of the Free World – the Capitol or the White House -- but Americans on that flight refused to surrender and thereby won a battle.

September 11 was not a date chosen at random. I’m inclined to credit the explanation offered by the late Christopher Hitchens, a man of the left who dissented from the left’s tendency to condone savagery directed at Americans. “It was on September 11, 1683 that the conquering armies of Islam were met, held, and thrown back at the gates of Vienna,” he wrote in The Guardian on Oct. 2, 2001.

That defeat of the Ottoman Empire and Islamic caliphate was “a hinge-event in human history,” he added. From then on, “it was more likely that Christian or western powers would dominate the Muslim world than the other way around.”

Most Muslims do not seethe over a 17th century war any more than most Americans nurse a grudge against the descendants of King George III. But those whom we have come to call Islamists regard the failure of Muslim forces to conquer Europe as “a humiliation in itself and a prelude to later ones.” Mr. Hitchens added one more observation, particularly relevant this summer: “The forces of the Islamic Jihad in Gaza once published a statement saying that they could not be satisfied until all of Spanish Andalusia had been restored to the faithful as well.”

Those who understand such matters know that 9/11 was not about America’s chickens “coming home to roost,” as the Rev. Jeremiah Wright unforgettably characterized the murder of 3,000 Americans. Nor was it a protest against imperialism, colonialism and occupation -- an attempt to address “legitimate grievances.” It was about a vision of the past and the future. It was about power and, uncomfortably, about faith.

The actions Western leaders have taken to counter this threat have been insufficient. Al Qaeda and its affiliates now operate in more countries than ever. An AQ splinter, the Islamic State, has seized much of Syria and Iraq, declaring a caliphate -- a successor to the one defeated at Vienna.

The Muslim Brotherhood – an organization whose motto includes the phrase “jihad is our way” – is regarded favorably by those who lead Turkey, a NATO ally, and rule Qatar where the U.S. maintains a military base and American universities and think tanks have established campuses.

The Islamic Republic of Iran is keeping its eye on the ball – the ball being nuclear weapons, the great equalizer, although equality is not at all what Supreme Leader Ali Khamenei and the Islamic Revolutionary Guard Corps have in mind. They are not cooperating with an International Atomic Energy Agency investigation into “the possible military dimensions” of their nuclear program. If they do obtain a nuclear capability, the odds increase that a nuclear exchange will occur, and/or that nuclear weapons will fall into the hands of terrorists. Iran and al Qaeda are rivals but they havecooperated in the past and are likely to do so against common enemies again. By now, we get that, right?

In New Hampshire last week, Vice President Joseph Biden called those fighting for the Islamic State “barbarians,” melodramatically adding that the Obama administration will “follow them to the gates of hell until they are brought to justice, because hell is where they will reside."

But the very same day, Secretary of State John Kerry chose to change the subject, making the bizarre suggestion that it is America’s religious “duty” to confront climate change -- which he has previously called “the biggest challenge of all that we face right now -- not least because “Muslim-majority countries are among the most vulnerable.”

Coincidently, this also was the week that Matt Ridley, a science journalist and member of the British House of Lords, pointed out that “the climate-research establishment has finally admitted openly what skeptic scientists have been saying for nearly a decade: Global warming has stopped since shortly before this century began.”

That does not imply climate change is not a concern; it does imply it’s not our “biggest challenge.” How inconvenient for the many politicians who would rather fight carbon emissions than jihadis, who are more concerned about you and me driving SUVs than Iranian mullahs spinning centrifuges.

For such politicians, required reading ought to include Brookings senior fellow Robert Kagan’smost recent essay on the West’s disconcerting return to “the realism of the 1930s.” The fundamental grievance of the illiberal and atavistic forces on the march back then, he observes, was no different from that of illiberal and atavistic forces on the march now: “being forced to live in a world shaped by others.”

Thirteen years after 9/11, the world shaped by Judeo-Christian values and the Enlightenment is undeniably imperfect. But are we willing to let al Qaeda, the Islamic State, the Islamic Republic and the Muslim Brotherhood re-structure it for our children?

The jihadis want the job. And they are more passionate about their beliefs than most of us: more willing – even eager -- to kill and be killed to spread them. Thirteen years after 9/11, it’s probably time to decide whether we’re capable of a serious response.

A Hollywood Actress Warns of the Coming ‘Ignorance’-Fueled Attack on Christianity
Redstate
Barrasso: Go ahead with SCOTUS confirmaton now, Democrats will blow up Senate anyway
Hotair