Advice to Israelis: Endure the Slander 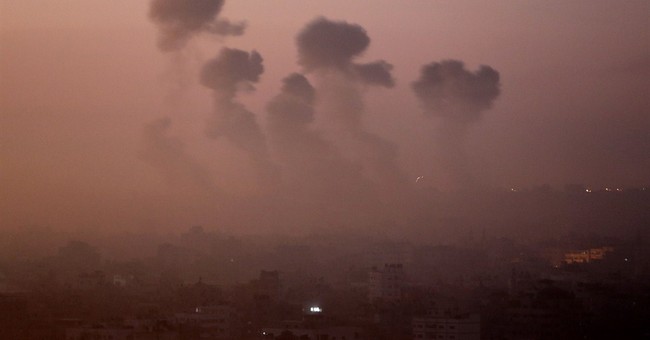 Hamas wants to kill as many Israeli civilians as possible. It’s been doing all it can to achieve that objective, for example launching missiles at Israel’s international airport and constructing tunnels to infiltrate terrorists into Israeli communities for the purpose of slaughtering and hostage-taking.

Israelis want to kill as few Palestinian civilians as possible. They’ve been doing all they can to achieve that – no nation under attack has ever done more. For example, they warn noncombatants of impending strikes on military targets by phoning, texting, leafleting and even dropping dummy bombs.

Palestinian civilians are being killed anyway, in large measure because Hamas has placed command posts, missile repositories and tunnel entrances in mosques, schools and hospitals. What’s more, Hamas commanders continue to use Palestinian men, women and children as human shields or, as they prefer, “martyrs.”

Surprise: The U.N., much of the media, many so-called human rights groups and large swaths public opinion, most of it on the left, condemn Israel and condone Hamas.

It’s worth pondering the origins of such perverse attitudes, and I’ll attempt to do so in a moment. But more urgent is to consider what Israelis can do about it. My answer: Very little.

If that pessimistic – or realistic – view is correct, it has policy implications. It suggests Israelis should (1) defend themselves as best they can, while degrading their enemies’ martial capabilities (in particular the missiles and tunnels) as much as possible; (2) continue scrupulously observing the laws of war despite the fact that they their enemies do not, and despite the fact that they will receive no credit for such efforts, because (3) they will know the truth about themselves and that will fortify them against the slanderers; (4) steadfastly reject proposals that would let Hamas achieve “wins” as a result of having initiated this conflict; and (5) try to drive home to Palestinians the fact that Hamas has brought them no benefits in exchange for the sacrifices it has demanded and the suffering it has inflicted.

One more recommendation: Once the current Battle of Gaza is over, Israeli officials would be well-advised to reiterate to Palestinians that if they would adopt a policy of non-belligerence (“peace” is a bridge too far) vis-à-vis Israel they would enjoy increased security, prosperity and self-rule, a foundation upon which further progress might be built.

It would be helpful if key actors within the “international community” would stop encouraging Hamas to commit war crimes. One egregious example: the UN Human Rights Council last week voted on a resolution titled “Ensuring respect for international law in the Occupied Palestinian Territory, including East Jerusalem.”

What does the resolution say about Hamas’ firing missiles at passenger planes taking off and landing -- attempting to do what was done recently done over the skies of Ukraine? Not a word.

What does it say about the tunnels from which Hamas assault teams planned to emerge armed with explosives, tranquilizers and handcuffs, on a mission to murder Jews and drag others beneath the earth? Nothing.

What does it say about Hamas? The resolution does not mention Hamas.

And note that the resolution calls Gaza “occupied” despite the fact that the Israelis withdrew from that territory in 2005. As for Israel’s blockade of Gaza, that was not put into place until 2007 -- after Hamas’ violent ouster of rival Fatah from Gaza, and in response to Hamas’ continuing threats and attacks. And it’s a military blockade: Food, medicines and fuel are allowed in – even now. But Israelis have tried, not entirely successfully, to prevent the importation of missiles and other weapons. That’s it: That’s the “occupation.”

Not one Western European member of the Human Rights Council voted against this distortion of legality, morality and reality. The most they could manage was to abstain.

Only the United States – kudos to President Obama and UN Ambassador Samantha Power -- had the integrity to oppose a resolution sanctioning a democracy for defending itself and supporting an organization whose Charter calls for genocide and proclaims “death for the sake of Allah …the loftiest of wishes.” (But because the resolution passed, there will now be a multimillion dollar “investigation” – funded largely by American taxpayers.)

Finally, a word about the factors fueling anti-Israelism: Among them, indisputably, is the world’s most durable prejudice: anti-Semitism, more precisely Jew-hatred, or to use a modern construction, Judeophobia. Bias and animosity against people of color, gays and Muslims is beyond the pale in polite society. Against Jews -- not so much.

In recent days, demonstrators in a list of Western cities have targeted not just Israeli embassies but synagogues -- seven in Paris alone – as well as shops and other properties owned by Jews. In Boston, there were shouts of “Jews back to Birkenau,” and “Drop dead, you Zionazi whores.”
?Imagine the outrage if French Jews, in response to a terrorist attack against Israelis, were to storm a mosque in Paris, or if Italian Catholics, in response to the Islamic State’s persecution of Iraqi Christians, threw stones at Islamic worshippers in Rome.

“The world is a mess,” former secretary of state Madeleine Albright mused last weekend. Among the primary reasons: Bellicose, supremacist, jihadist ideologies, movements and regimes have arisen from within the decreasingly diverse Muslim world. Hamas is such a regime, participates in such a movement, and subscribes to such an ideology – its Charter is explicit in this regard as well.

Western nations cannot make peace with jihadists. They can attempt to appease them but doing so only serves to reinforce the impression that they are weak horses. Israelis have few options -- none of them appealing. Some, however, are worse than others, as I suspect most Israelis don’t need me to tell them.