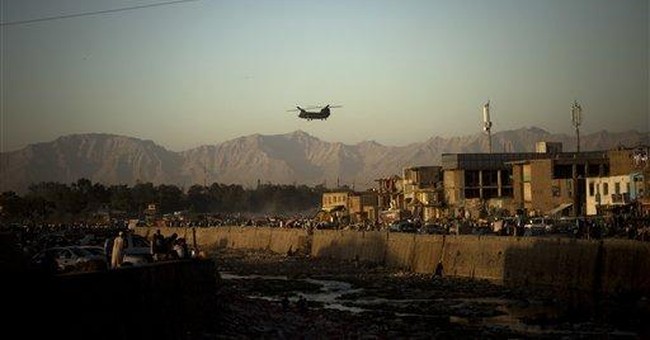 Afghans and Pakistanis both dislike the term "AfPak." But the fact is the two nations now constitute a single front -- the most "kinetic" front -- in the global war being waged by militant Islamists.

During his presidential campaign, Barak Obama emphasized his opposition to the conflict in Iraq but he was adamant about the need to prevail in Afghanistan. And this month, American marines launched Operation Khanjar (Thrust of the Sword), Obama's own "surge" of troops into Helmand Province where, over the past two years, the Taliban has been regrouping and regaining power. The White House has pushed the Pakistani government to challenge the Islamist insurgents on its territory as well.

The goal is straightforward: to "disrupt, dismantle and defeat" both the Taliban and al-Qaeda in their southern Asian strongholds. But the means to those ends are deceptively complicated, as was made clear at a recent "experts workshop" on the "AfPak Theater" organized by the Foundation for Defense of Democracies, the policy institute I head. Among those participating in the conference: current and former ambassadors, scholars, foreign correspondents and representatives of organizations working on the ground in Afghanistan and Pakistan.

The Taliban took over Afghanistan in the 1990s and promptly gave safe haven to al-Qaeda. From its headquarters in the southern city of Kandahar, al-Qaeda plotted - and then celebrated -- the atrocities of Sept. 11, 2001.

In response, the United States, allied with anti-Taliban Afghans, toppled the regime. But the Taliban's leader, Mullah Mohammed Omar, and al-Qaeda's leader, the Saudi multi-millionaire, Osama bin Laden, escaped across the border into northwestern Pakistan, an area so wild Pakistanis sometimes describe it as "Jungle-stan."

Over the years since, the U.S. and its NATO allies have attempted to bring security and stability to Afghanistan - with limited success. During this same period, both al-Qaeda and the Taliban have expanded their operational bases in Pakistan. In 2008, the Taliban moved into the Swat valley - a beautiful area in which I happily trekked 20 years ago -- just a short march north of the Pakistani capital of Islamabad.

President Obama is no advocate of "nation building." But he appears to recognize that unless we leave behind in Afghanistan a government that can provide for its self-defense and maintain the support of the population, new Taliban fighters will emerge. Financed not just by the opium poppy trade but also by radical Arab oil billionaires, they will slaughter those who cast their lot with us.

And even if Afghanistan were to be transformed into the Costa Rica of Asia, it would count for little should militant Islamists take over nuclear-armed Pakistan. An al-Qaeda statement, issued last month, read: "God willing, the nuclear weapons [in Pakistan] will not fall into the hands of the Americans, and the Mujahideen would take them and use them against the Americans."

The emir of the Taliban in Pakistan, Baitullah Mehsud (also sometimes spelled Ay'atulah Mahsoud) is believed to be responsible for assassinating former Prime Minister Benazir Bhutto as she was campaigning in late 2007. His ambitions, however, go beyond Pakistan's borders. "We want to eradicate Britain and America, and to shatter the arrogance and tyranny of the infidels," he has said. "We pray that Allah will enable us to destroy the White House, New York and London." Just bluster? That was the view of many analysts in the 1990s when Osama bin Laden was making similar threats.

In recent days, the Pakistani military has been showing increased commitment and seriousness. According to experts at the FDD workshop, however, it remains a conventional fighting force with little training in counterinsurgency, the military strategy emphasizing protection of the local population: eliminating terrorists that threaten them, helping them establish security in their areas, and assisting their efforts to build some semblance of functioning government (even if just a council of elders) and economy.

The U.S. military can do only so much to support Pakistan's moderates. But the CIA's use of Predator drones apparently has been effective, with at least eight major al-Qaeda leaders recently eliminated.

One Taliban commander told a Newsweek reporter he was "stunned" by the precision of the Predators - in one case a missile hit the specific room inside a house where Mustafa al-Misri ("Mustafa the Egyptian") and several other al-Qaeda operatives were "holed up."

A participant at the FDD workshop said he was certain that not a single civilian in Pakistan has been killed by such attacks since September, 2008. Reports to the contrary, he said, were Taliban lies. One example: Film footage, recorded by a Predator camera, of a senior Taliban leader standing alone by his car in a field, talking on a cell phone - and then being obliterated by a Predator strike. Nevertheless, in its news report, the BBC cited a Taliban claim that nine "civilians" also had been killed in the attack.

Bin Laden was not wrong when he said people prefer a strong horse to a weak horse. Al-Qaeda in Iraq was defeated only after Iraqis became convinced that America's military was, as combat journalist Bing West memorably phrased it, "the strongest tribe," the best friend they could have, and would not abandon them.

If the AfPak Theater reinforces this perception of the U.S., it will be a victory. If not, it will be a defeat. By the same token, America's efforts in the global war will be advanced if, on this front as in Iraq, militant Islamism is shown to be a dead end - in both the figurative and the literal senses. Only then will Afghanistan and Pakistan have a chance to evolve into the independent and successful nation states so many of their citizens would like them to be.