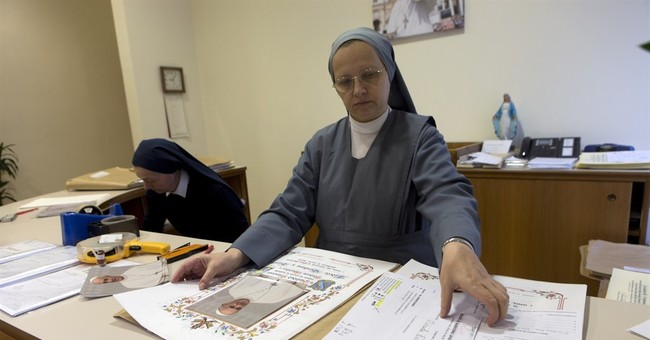 Last week, I pointed out how PolitiFact crowned the promoter in chief's sound bite for Obamacare the "Lie of the Year" for 2013: "If you like your health care plan, you can keep it."

I also made a prediction that among his top 10 falsehood contenders for 2014 will be a reversal of what he emphatically stated back on Sept. 9, 2009: "Under our (health care reform) plan, no federal dollars will be used to fund abortions."

I showed how President Barack Obama already has repeatedly broken that promise over the past few years. But a coup de grace came when Obamacare mandated nonprofit companies and religion-affiliated institutions across the country to provide contraception and drugs that possibly induce abortions in their employee health care plans.

As Fox News explained, "the policy is among the law's most contentious provisions because it exempts churches that oppose contraception but requires religious-affiliated organizations, such as colleges or hospitals, to provide the coverage for their workers."

That is why, in 2012, a group of nuns -- the Little Sisters of the Poor -- appealed to Supreme Court Justice Sonia Sotomayor for help on behalf of their care facility for the elderly, because Obamacare was forcing them into an ethical dilemma in which they must violate their faith or pay fines.

So on New Year's Eve, just a day before the provision in Obamacare was to be forced upon them, Sotomayor blocked the requirement upon the nuns in order to look into the matter further.

In response to the nuns' appeal, the U.S. Department of Justice immediately argued in legal papers filed a couple of weeks ago that the nuns don't have a leg to stand on. The Obama administration tried to explain that the nuns don't have to offer contraception -- including abortion-inducing drugs -- as long as they sign a government form that delegates the action to a third party. But for the nuns' religious conviction, whether they offer the contraception or sign a waiver for another to do so is simply sin. Yet without signing that "self-certification" form, the nuns would incur steep government fines.

It is still unknown when Sotomayor will rule on these ludicrous government actions and violations of the nuns' personal religious liberty and constitutional rights.

But what is most illuminating about the rise of the nuns' perilous and oppressive situation is the utter silence of Obama, who often has stood up for progressive minorities who were being crushed by bullying. As NBC News reported about the nuns' crisis, "the White House's reaction was muted."

The reason is Obama knows that his administration and health care law are intentionally shoving back against the nuns' convictions and, indeed, the very power of the Roman Catholic Church -- a huge advocate for the rights of the unborn. Obama is waging war against the Catholic Church and other faith-based organizations to see just how much he can choke the wind out of their beliefs about contraception and abortion and enforce government control over their conscience.

Their faith crisis is a nonprofit ecclesiastical replay of what happened in 2012 with some for-profit companies -- Hobby Lobby, Mardel Christian & Education Stores and a Pennsylvania woodworking company, all of which refused to comply with Obamacare's mandate to provide birth control based upon the owners' religious beliefs to do so.

The very constitutional religious rights of every American are being represented and trampled in the nuns' case and Obama's power play. As go the nuns, so we go.

Seeing as our president won't value and honor life in the womb, please write or call your local, state and federal representatives and let them know where you stand. And then ensure your local community of faith is honoring Sanctity of Human Life Sunday on Jan. 19. The day commemorates the Jan. 22, 1973, Roe v. Wade U.S. Supreme Court decision, which legalized abortion in our country. Since then, more than 55 million abortions have taken place in the U.S.

Here are a few ways you can prepare for Sanctity of Human Life weekend:

--Ask your pastor, priest or rabbi how your place of worship is observing Sanctity of Human Life Sunday by fighting for the lives and rights of the unborn.

--Please read the article titled "50 Ways To Help Unborn Babies and Their Mothers," by my friend and prolific author Randy Alcorn. It's one of a host of great resources at his website, http://www.epm.org. Also, get several copies of Randy's book "Why Pro-Life?" and hand them out to others.

--Visit the website started by my dear friends Norm and Anne Miller, http://www.iamsecond.com. In particular, please listen to the powerful testimony of Lisa Luby Ryan. It is well worth your time.

--Watch the story of Abby Johnson, the former director of the Bryan, Texas, Planned Parenthood clinic who blew the whistle on her former employer by telling the shocking truth about everything she saw inside the abortion industry -- and resigned from her job to join the pro-life movement. Johnson helped to expose the multibillion-dollar marketing of abortion in the fifth episode of the Emmy-winning series "Facing Life Head-On," available to watch online. Also check out Johnson's new book, "Unplanned," which details her exposure of Planned Parenthood.

--Most of all, remember these words by British orator Edmund Burke, which are probably more true in our day than they were when he stated them: "The only thing necessary for the triumph of evil is for good men to do nothing."

Next week, I will unveil what Obama's abortion agenda is for the remainder of his presidency.