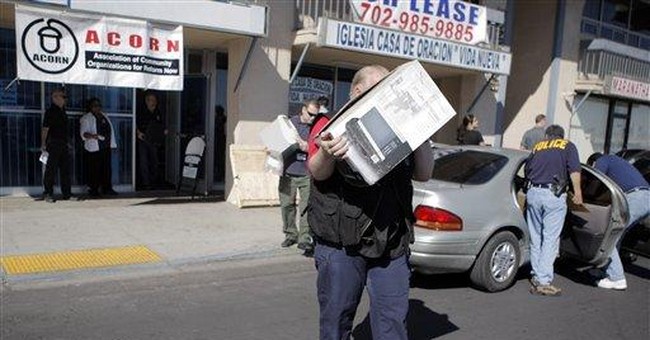 Obama's administration says it's against voter ID laws because it is trying valiantly to keep minorities and the poor from being unfairly discriminated against. But the truth is that it is trying to keep President Obama in office. It knows that voter IDs are bad business for this White House's campaign and re-election.

In the past couple of weeks, video proof (titled "US Attorney General Eric Holder's Ballot to Vote Offered to Total Stranger" on YouTube) from Holder's own voting precinct in Washington revealed that voter fraud is alive and well in the nation's capital. On primary election day, April 3, a representative from James O'Keefe's nonprofit organization, Project Veritas, simply strolled into the polling place and was offered the ballot for Holder after merely stating that his name was Eric Holder and giving his address. Though he was not asked for ID, O'Keefe's assistant added that he had forgotten his ID, to which the poll worker retorted: "You don't need it. It's all right. As long as you're in here, you're on our list and that's who you say you are, you're OK."

O'Keefe's assistant then replied: "I would feel more comfortable if I just had my ID. Is it all right if I go get it?" After the poll worker agreed, O'Keefe's assistant said as he walked away, "I'll be back faster than you can say furious," playing on the scandalous Fast and Furious gun-smuggling debacle by Holder's Department of Justice.

Of course, rather than confess to culpability or that there may be a flaw in the election process, the District of Columbia Board of Elections and Ethics announced last week that it was launching an investigation to possibly bring charges against Project Veritas.

As CitizenLink reported, board spokeswoman Alysoun McLaughlin carefully spun her political rebuttal. She said: "We're very concerned about any kind of activity that occurs in a polling place where someone is misrepresenting themselves or otherwise obstructing what occurs at a polling place. Our concern is with the tactics that this individual is employing. If you walk into a polling place on Election Day to register to vote for the first time, then you need to provide proof that you are a resident of a district. But if you are a registered voter, if you've been on the rolls, we do not require ID of those individuals. That's the law. We leave it to the policymakers to determine what those laws should be."

There's no shock or surprise that Holder and his DOJ cronies similarly pitched their response about the Project Veritas expose by saying, "It's no coincidence that these so-called examples of rampant voter fraud consistently turn out to be manufactured ones."

But the truth is -- as Hans von Spakovsky, a senior legal fellow at The Heritage Institute, summarized -- "They don't want to do anything about the vulnerabilities in the system. That means they really don't want elections that are secure and have integrity. It's highly dangerous that the attorney general has that view toward safe and secure elections."

Before the people at the DOJ arraign Project Veritas, they might want to recall that recently deceased news watchdog Mike Wallace often used undercover video on "60 Minutes" to expose fraud in Medicare claims and other consumer goods.

By the way, Project Veritas' recent D.C. polling revelation is its fourth uncovering of voter fraud nationally. Previous locations have included Minnesota, New Hampshire and Vermont, where O'Keefe obtained election ballots by using other celebrity names, such as Tom Brady and Tim Tebow, and even some of the 1.8 million people who are deceased but still registered voters. Texas had better beware, because "Chuck Norris" could be next for Project Veritas.

To assist Holder and Obama, NAACP President Benjamin Todd Jealous recently petitioned the United Nations Human Rights Council -- which, of course, has no jurisdiction over American law (though Jealous might not recognize that) -- that the tougher Texas voter ID law is unfair and discriminatory.

In 2003, the first voter ID laws were passed, and as of September 2011, 30 U.S. states required some form of ID in order for citizens to cast their votes.

State polls have shown that as many as 80 percent of voters, including majorities of Hispanics and African-Americans, agree that voter ID laws are good and necessary. And let's not forget the 2008 U.S. Supreme Court's 6-3 decision, authored by Justice John Paul Stevens, that upheld Indiana's strict ID requirement.

Voting is a right and privilege of citizens in this country and should be protected at all costs. By opposing voter ID laws, however, the Obama administration is actually dismantling the integrity of elections by enabling voter fraud.

Having tried all we can to stop the administration's anti-constitutional usurpations, we are left alone to take the path recommended by Founding Father James Madison, who admonished us patriots in 1788, "In the last resort a remedy must be obtained from the people who can, by the elections of more faithful representatives, annul the acts of the usurpers."

Speaking of restoring our republic, I encourage everyone to see Kirk Cameron's new and inspiring patriotic movie, "Monumental," which opened this past weekend in select theaters across the country. My family saw it, and every family who loves this country should see it, too. You can watch a trailer of the movie or find a theater location where it's playing by going to http://www.MonumentalMovie.com.