Chestnuts Roasting on a Copenhagen Fire 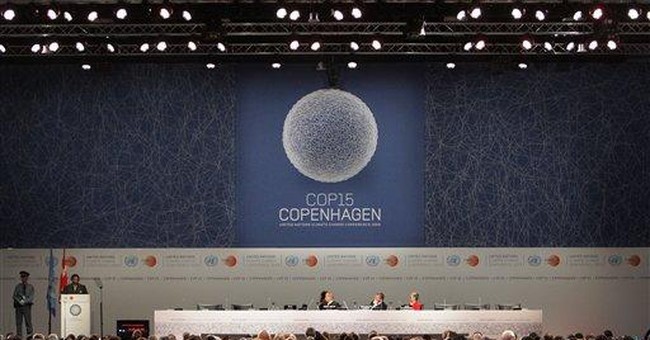 Copenhagen is on fire this week, and there's far more heating up than just the climate.

Heads of state and others are gathering this week at the United Nations Climate Change Conference in Copenhagen, but bonfires already have been blazing for weeks on that European front.

Let me see whether I can summarize the chestnuts roasting on that Copenhagen fire.

Shocking e-mail exchanges from scientists at an eminent global warming research center in the United Kingdom have proved that key climate change scientists have suppressed evidence in order to "trick" the public or "hide the decline" of global temperatures.

Rather than focus on the audacity of the ClimateGate cover-up, Obama's top science adviser, John Holdren, downplayed the e-mails, informing Congress that the controversy involved a small group of scientists. And others, including Sen. Barbara Boxer, D-Calif., blamed the hackers who exposed the e-mails rather than the scientists who deceived the world with false global climate reports.

Similarly, the U.N. was caught recently deleting documents that would disclose how member states are leading (or not leading) the way in self-greening efforts.

The scientific journal Geophysical Research Letters documented that ice melt on Antarctica was the lowest in 30 years during 2008-09, a fact being ignored intentionally by NASA.

A U.S. scholar is threatening to sue NASA in order to prompt the agency to release climate change data, which he says have been manipulated here just like in Britain.

Officials in the Environmental Protection Agency gagged one of their own senior researchers after the 38-year employee submitted an internal critique of the EPA's climate change position.

Unlike the U.S., China and India already have opposed foreign climate governance because it would jeopardize their national sovereignty.

Nearly two months ago, Christopher Monckton, once science adviser to British Prime Minister Margaret Thatcher, warned us that the real purpose of the conference is more about global government than it is about global warming.

In my former column titled "Obama's One-World Government," I detailed more than a dozen actual statements in the proposed summit treaty that threaten our national sovereignty, could severely cripple our already depressed economy and are so globally socialistic that they would make even a communist blush.

Al Gore made statements back in July that change will be driven through "global governance."

The U.N.'s climate chief, Yvo de Boer, reported that between $10 billion and $12 billion annually will be needed from developed countries (e.g., the U.S.) through 2012 to "kick-start" things. According to the World Bank, adapting for global warming (e.g., building larger dams and higher bridges) will cost an additional $75 billion to $100 billion a year over the next 40 years. (A business professor at the University of Cambridge says it could be as high as $300 billion.)

A Japanese energy commission revealed that the majority of Japanese scientists reject U.N.- and Western-backed theories of climate change.

Despite Rep. Ron Paul's call for members of Congress to consider the joint opinion of more than 32,000 U.S. scientists -- including more than 9,000 Ph.D.s -- who believe humans likely have little or no part in the creation of "global warming," White House press secretary Robert Gibbs justified the White House's position and waved away opposition by tritely retorting that most people believe in global warming. A recent survey, however, found Americans' belief in global warming has declined and is at a 12-year low.

With 16,500 delegates descending upon Copenhagen -- including 140 aircraft carrying world leaders, heads of state and VIPs -- the U.N. estimates that the 12-day conference will create 40,584 tons of carbon dioxide equivalents. And could it be merely coincidental that all these planes are amassing at one place Dec. 7, the very anniversary of Pearl Harbor? Or are these all signs that our real enemies are looming on the horizon?

As I consider all of these global warming quandaries, the questions that keep coming to my mind are:

If there's no final draft of a treaty to sign, why is our president "contributing to global warming" by flying that super-jumbo 747 Air Force One to Copenhagen?

Why does Obama want to require American households to pay possibly more than $3,000 in additional annual taxes to reduce greenhouse emissions?

In the midst of one of America's worst recessions, where is the federal government going to get the billions of dollars needed to fulfill the financial promise to assist developing countries with green initiatives outlined on Page 11 of the 181-page climate summit treaty, which says it would ensure "that global crises, such as the financial crisis, should not constitute an obstacle to the provision of financial and technical assistance to developing countries in accordance with the Convention"?

Hasn't the Obama administration charged enough on the nation's credit cards in its first year in power by its trillions of dollars in bailouts, borrowing and additional government programs, including socialized medicine?

Our government would do well to reconsider and actually live and lead by the words of Thomas Jefferson, who said during his first inaugural address, in 1801: "A wise and frugal government, which shall restrain men from injuring one another, shall leave them otherwise free to regulate their own pursuits of industry and improvement and shall not take from the mouth of labor the bread it has earned. This is the sum of good government."