God and Guns, Part I 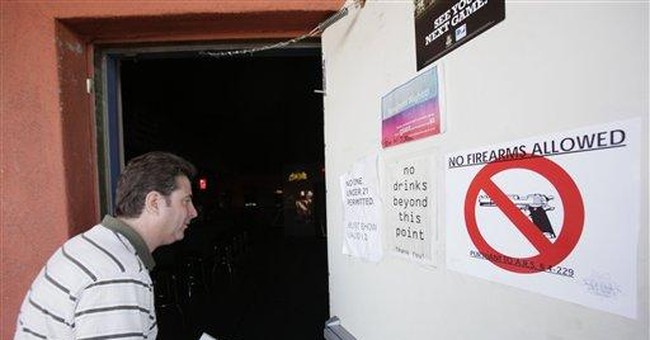 God and guns are what our country was founded upon.

But more and more, these pillars of American life and liberty are being attacked and abandoned out of not only sheer bias but also ignorance of our Founding Fathers, the Revolutionary period and our Constitution. These pivotal American rights have become the brunt end of cultural jokes and often are regarded as biased lifestyle components of "rednecks" and rural citizens.

For example, gone but not forgotten is even President Barack Obama's partiality on the campaign trail in April 2008. You might recall when he addressed the economic hardships, at a private California fundraiser, of those in Pennsylvania, with this quip: "You go into some of these small towns in Pennsylvania, and like a lot of small towns in the Midwest, the jobs have been gone now for 25 years, and nothing's replaced them. ... And it's not surprising, then, they get bitter, they cling to guns or religion ... as a way to explain their frustrations."

Presently, with the Supreme Court back in session and new justice Sonia Sotomayor's narrow view of the Second Amendment, gun rights are back again on the docket. Two weeks ago, concerning a case out of Chicago, the justices agreed to rule on whether the Second Amendment gives Americans a constitutional right to keep and bear arms that is enforceable against local and state gun laws.

The indifference toward and lack of education and passion regarding all of our Bill of Rights gravely concerns me. And while there is nothing funny about it, it is one of many reasons roughly one-fifth of the 101 short stories are "Freedom" entries in my new book, "The Official Chuck Norris Fact Book," a fun yet inspirational and educational book in which I share my 101 favorite Chuck Norris "facts" -- embedded within five core values: freedom, family, faith, fitness and fight. (It will be released Nov. 1 and is now available for pre-order on Amazon.com for less than $9. Proceeds will go to help KickStartKids.org.)

In my column last week, I gave a sneak peek and example of a "Fight" entry, in which I discussed my struggle with a snake on "Walker, Texas Ranger." In this column, I'd like to share an entry from my "Freedom" code. Each of the 101 entries in the book is divided into four sections: one of my favorite official facts, a related short story ("Let's be honest"), a classic or contemporary corresponding quote ("They said it") and one of my principles for life ("Chuck's Code"), which are represented by the five "F's," or my core values. (Next week's example will be on "Faith," in "God and Guns, Part 2.")

Here's Entry No. 49, on the Second Amendment:

"Chuck Norris sleeps with a pillow under his gun."

This past year I shot (no pun intended) an NRA public service announcement (now on YouTube) in which I shared my conviction about self- defense: "If some thug breaks into my home, I could use my roundhouse kick. But I prefer he look down the barrel of my gun."

The reason I was so adamant in that PSA is because there has been some movement in our country to get away from our Second Amendment rights. Last year, the Supreme Court even wrangled over the question, Should the government allow private citizens or only public servants ("state militias") "to keep and bear arms"?

Is someone joking? Could the twenty-seven words of the Second Amendment be any clearer? "A well regulated militia being necessary to the security of a free state, the right of the people to keep and bear arms, shall not be infringed" (emphasis added).

Just because Washington, D.C., had a pistol problem (with their ban on handguns from 1976-2008, during which time the murder rate actually increased), the court (or government) shouldn't penalize the rest of the country by resetting national precedent based upon a biased Constitutional interpretation. The Bill of Rights either encompasses the privileges of every citizen in every amendment or none at all.

In the early days of our country, many states had gun laws that aligned with the Constitutional standard. As Chief Justice John Roberts asked, "If it is limited to state militias, why would they say 'the right of the people'? ... What is reasonable about a total ban on possession?"

Thomas Jefferson similarly wrote near the end of his life in 1823, "On every question of construction (of the Constitution), carry ourselves back to the time when the Constitution was adopted, recollect the spirit manifested in the debates, and instead of trying what meaning may be squeezed out of the text, or invented against it, conform to the probable one in which it was passed."

"Let your gun therefore be the constant companion of your walks." --Thomas Jefferson, in a letter to his nephew Peter Carr

The right of the people to keep and bear arms shall not be infringed.

Lynyrd Skynyrd, a legendary Southern rock band, put it well in the title track of their new album, "God and Guns":

That's what this country

Well, we might as well give up and run

If we let them take our God and guns."