Obama, Now That You Work for Me (A Letter to the President-Elect) 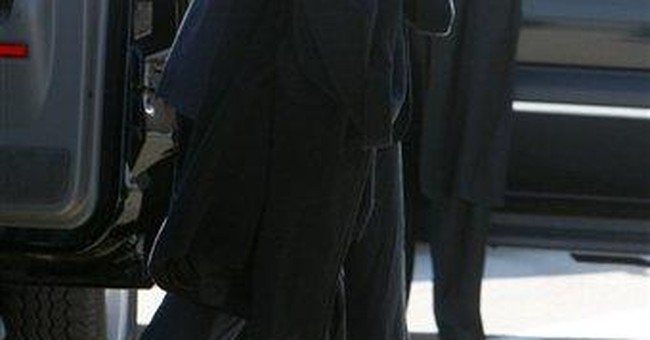 First, congratulations on your victory. The historical magnitude of your presidential win is nothing short of stupendous and a colossal fulfillment of the American dream (an achievement embedded long ago in the equality clauses of the Declaration of Independence).

It's likely no big surprise that I don't see eye to eye with you politically. Actually, I stand in stark opposition to most of your politics. Still, I realize that we must learn to work together if we are to see our country get back on track. After Election Day, I asked myself, "How can I work for our new president to help better America?" Then a thought occurred to me. The first question that should be answered is: How will you work for me? After all, "We the People" of the United States employ you, correct?

So here are a few ways you might begin to gain the respect of those who oppose you and to show that your campaign pledges to bridge the divides were not empty promises to get you into office. And these requests I make are based upon the inaugural oath you will make Jan. 20, "I do solemnly swear that I will faithfully execute the office of president of the United States and will, to the best of my ability, preserve, protect and defend the Constitution of the United States." No doubt these won't be my only requests through the years, but they serve as a good beginning:

--Use and cite the Constitution. If that constitutional oath ("preserve, protect and defend") is the central duty of your job description, then I assume we will be hearing often from you about exactly how you are doing just that. There is no replacement for strict adherence, application and defense of the Constitution. And it's high time that presidents quit reciting the presidential oath tritely and then abandoning its tenets when they enter the Oval Office. You should be quoting from the Constitution publicly as often as a preacher quotes the Bible to his congregation -- at least weekly. If you take this oath and challenge seriously, you will limit the powers of federal government, reduce taxes (for everyone), encourage the freedom of religion and expression (even in the public square), and stand up for such things as our right to bear arms. The American public and the government have lost their grip on the content and role of the Constitution, but if you daily choose, you can help to re-educate and model its usage for them.

--Protect American life. Thomas Jefferson wrote in 1809, "The care of human life and happiness, and not their destruction, is the first and only legitimate object of good government." Those are powerful and enlightening words. Of course, such a role was created and secured in the very fabric of our nation -- in the Declaration of Independence. The commitment to protect life should serve as the basis for all you do, even as a foundation for your national defense strategy. I'm sure the first of your secret briefings this past week on our global security threats have opened your eyes to the extensive onslaught of our enemies. Don't allow your pride, partisanship, personal bias or political abilities to jeopardize the safety of Americans lives. As commander in chief, you are called to preserve American life. Quite frankly, that is why I'm surprised that a man such as you, who professes to fight for minorities, would not recognize the clear value of a human life in a womb. Federal law should not decree the sacrifice of one human life for the preference of another. Both lives should be protected. Otherwise, what do Jefferson's 1809 words mean? As president, you are called to protect (not destroy) human life; it is the "first and only legitimate object of good government."

--Lead more from the center. It's been pointed out by countless pundits, and your track record is clear: You have one of the most liberal records in the Senate. You've had the liberty of voting and fighting for an agenda "from the left" as you've tried to persuade state and federal lawmakers to do the same. But if you continue to lead our country down a more liberal road, you will follow the peril of Bill Clinton, who stepped into office and initially tried to lift the ban on gays in the military and extend abortion rights, only to prompt the creation of a more balanced and strong Republican Congress in the 1990s. Don't underestimate the resurrecting power of the conservative voice. You observed in last week's election how three states across this union voted to protect marriage in their constitutions (the 28th, 29th and 30th states to do so -- California, Arizona and Florida).

We will be watching who you choose to be in your Cabinet. We will discern how you lead Pelosi and Reid. We will be observing those you select as candidates for Supreme Court justices. The election is over. No more promises. No more words. You might work well in a team, but this time, you don't have congressional members to hide behind. You're on your own -- leading the pack -- and the whole country is watching. I, especially, am watching. So make sure you lead more from the center.

One of your 300 million bosses,