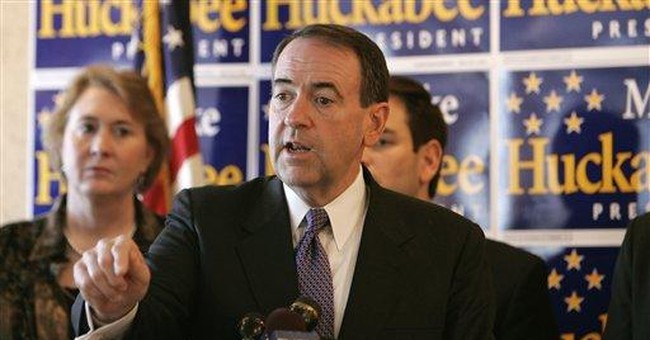 This past week, investors experienced a sizable economic tremor as Wall Street's fortress shook. From a Dow that dropped more than 200 points in the first 10 minutes of trading to the Federal Reserve's biggest "emergency" slash of interest rates in a quarter of a century, even the experts are confused as to whether these are signs of an unhealthy economy or birth pains of an American recession.

Just as fluctuating and fickle is this presidential election. With political surges, primary bypasses, midstream startups and blended politics, there are still no clear front-runners in either party. Super Tuesday is on the horizon, and most people still are speculating about who is leading the pack.

Speaking of presidential ebbs and flows, I believe many are suffering now from a type of presidential buyer's remorse. On the one hand, I commend those who stuck their necks out early on in favor of a candidate's platform, values or principles over another's. (There are still far too many who wait in hiding for a clear leader out of fear of being aligned with a loser.) On the other hand, I'm sure many are now silently sorry that they've backed certain presidential hopefuls because of new revelations or reactions on the campaign trail.

The bases for political remorse are varied:

-- Realizing that all the Democratic candidates would raise taxes, expand big government oversight and waste, and increase national security risks by reducing roles of the military.

-- Awakening to the reality that Mitt Romney has and will flip-flop on issues more than International House of Pancakes turns pancakes.

-- Learning, as David Limbaugh and Pat Buchanan noted this week, that John McCain is respectfully not a full-fledged conservative.

Of course, it's never too late to change your mind before casting your actual vote. But then again, pride is often a formidable foe to overcome on the way to the booth.

When I backed Mike Huckabee for president, I didn't do so because he was a front-runner, could beat Hillary, had lots of money, or because his presidency would advance my humanitarian efforts or increase my pocketbook. I endorsed him because I agree with his platform, trust in his integrity, relate with his poor upbringing and support for average citizens, value his 11 years of service as governor of Arkansas, and believe in his vision for a better America.

I want Mike to win -- the nomination then the presidency. But whether he wins or is offered the position of vice president or a position in the cabinet, my wife, Gena, and I can sleep at night and move forward into the future because we've lived true to our convictions, principles and beliefs. We cannot experience buyer's remorse with Mike Huckabee because we know, win or lose, he could lead our nation into a better and prosperous tomorrow. And he will continue to do so, as he has done for the past 20 years, whether he's the president or not.

This past week, news agencies reported how some of the presidential candidates' campaigns are running into financial hardships. Huckabee even grounded press airplanes and asked staff to assume volunteer positions. While many have interpreted those as signs of Mike's demise, I see them differently. They are sureties of his stewardship. He's being fiscally frugal as he always has been in office.

Mike has arisen as a front-runner from obscurity on a shoestring budget, being outspent by his rivals by at least a 10-1 ratio, proving it's his message, not money, that matters. He doesn't have a personal account of multimillions like Romney, nor does he think it's good stewardship, like McCain, to borrow what one doesn't have to gain what one might not win.

For Mike, handling campaign finances is a microcosm of managing the national budget. If he doesn't have the money, he's not going to spend it. He has made this commitment on a number of occasions, and he lived up to it in his gubernatorial service in Arkansas, bringing in a balanced budget for 12 straight years and ending his term with a surplus of $844.5 million.

I ask again: Are those not the types of figures we want to see at the bottom lines from the future executive fiscal leadership of America?

Mike is a leader we all can trust and financially back, and he will be a president with whom this nation will not experience buyer's remorse.