Chuck Muth
|
Posted: Oct 24, 2019 10:20 AM
Share   Tweet
The opinions expressed by columnists are their own and do not necessarily represent the views of Townhall.com. 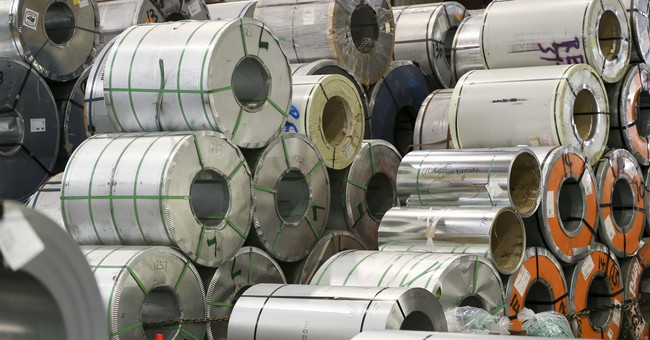 When it comes to President Trump, even some of his staunchest critics concede that he’s done right by America’s metalworkers. For two decades, previous administrations have stood idly by while the number of American aluminum smelting plants dwindled from 23 down to 5. But not President Trump—he decided to act. In 2018, Trump instituted a 10 percent aluminum tariff on foreign competitors, recognizing that it was the only way to ensure China’s market manipulations didn’t damage American businesses.

Clearly, the president made the right call. As a recent Reuters article emphasized, Trump’s America First policy approach brought the U.S. aluminum industry back from the brink of collapse. The president’s aluminum tariffs have helped to secure the jobs of some 4,000 U.S. workers, defending their factories, their industry, and, most importantly, their livelihoods.

But now, America’s metalworkers face yet another major hurdle. In addition to foreign adversaries, the U.S. aluminum industry must also contend with potentially devastating domestic policy. Dissatisfied with the president’s America First priorities, a group of politicians has introduced the APEX Act—a bill that will not only undermine the president’s agenda but will also weaken the American aluminum industry in the process.

As it currently stands, President Trump’s tariffs prevent countries like China from utilizing its artificially low prices to destroy America’s aluminum manufacturers. However, the APEX Act seeks to change that, undoing the progress made under the aluminum tariffs and leaving domestic producers vulnerable once again. Specifically, the bill would grant the Commodity Futures Trading Commission (CFTC) the power to set reference prices for aluminum. According to an October 23 coalition letter and the 17 freedom-minded organizations which undersigned it, including Citizen Outreach, where I serve as president, the APEX Act “would threaten domestic aluminum production, strengthen foreign manufacturers and dangerously disrupt the aluminum commodities market."

Legislative allies of the corporate beverage lobby have seemingly crafted the APEX Act as a means to pad their bottom lines. Having previously purchased cheap aluminum from foreign sources, these beverage manufacturers have transitioned to purchasing more domestic aluminum following the implementation of Trump’s tariffs. But now, these lobbying interests are attempting to return to the status quo, sacrificing American business for foreign profit. The beverage lobby has, on multiple occasions, called for intervention in aluminum prices, and the APEX Act is just the latest legislative push to get there.

If enacted, the APEX Act would effectively provide the CFTC with the singular authority to establish government controls on the price of aluminum, which would spell disaster for the industry at large. The price controls would counteract the tariffs’ competitive protections, forcing U.S. metalworking companies to accept unsustainable, practically nonexistent profit margins. The American aluminum industry would once again slip into a state of decline, paving the way for foreign competitors to take their place.

Towns would lose their local businesses, workers would lose their jobs, families would lose their breadwinners, and the United States would lose a piece of its national identity. All of that to save beverage manufacturers and their corporate distributors a few pennies on the dollar. This would be the legacy of the APEX Act—and for that reason, it must not be adopted.

President Trump’s America First policies have done this country a great service by revitalizing the U.S. aluminum industry. Now, it is incumbent upon Congress to ensure this trend continues. This isn’t a partisan issue. Both Republicans and Democrats agree that aluminum must remain an essential component of the United States economy. However, the APEX Act would ensure just the opposite—the aluminum industry’s swift decline.

As such, American legislators need to ask themselves: Are they willing to sacrifice yet another industry to China, hanging their fellow Americans out to dry for marginally cheaper soft drinks? For our country’s sake, hopefully, the answer is no.