Chris Talgo
|
Posted: Oct 11, 2019 12:01 AM
Share   Tweet
The opinions expressed by columnists are their own and do not necessarily represent the views of Townhall.com. 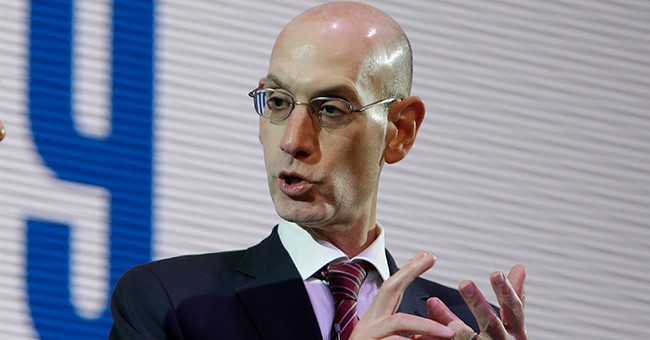 In case you have been living under a rock the past week, or getting your “news” via the Xinhua News Agency (the official state-run press of the People’s Republic of China), you may have missed the uproar following Houston Rockets General Manager Daryl Morey’s innocuous tweet supporting freedom fighters in Hong Kong. On October 4, Morey tweeted, “Fight for Freedom. Stand with Hong Kong.”

Almost immediately, Morey was thrown under the bus by the National Basketball Association (NBA) and several high-profile entities with strong business ties to the authoritarian Communist Party that has ruled China for the past seven decades. Apparently, the NBA and many U.S. corporations care much more about the almighty dollar than they do about trivial things such as human rights, freedom of speech, etc.

The NBA’s official Twitter feed has more followers in China than in the United States, and the NBA (and several other U.S. corporations) sell an abundant amount of merchandise to the huge Chinese fan base.

In other words, China is still a relatively untapped market. And countless U.S. executives, including NBA Commissioner Adam Silver, are drooling all over themselves when it comes to receiving permission from Chinese officials to access the Chinese market.

However, the Chinese communist government does not allow free and unfettered access to their highly valuable market. In other words, if you want to do business in China, you must play by the Communist rulers’ rules.

Of course, many of China’s “rules” are totally antithetical to America’s founding principles.  However, as Adam Silver and his NBA cronies have demonstrated in recent days, they are more than willing to throw these sacred principles to the wayside, as long as it allows them access to the Chinese money machine.

On October 6, the Consulate-General of the People’s Republic of China in Houston issued the following statement: “We are deeply shocked by the erroneous comments on Hong Kong made by Mr. Daryl Morey, general manager of the Houston Rockets. We have lodged representations and expressed strong dissatisfaction with the Houston Rockets, and urged the latter to correct the error and take immediate concrete measures to eliminate the adverse impact.”

The NBA responded with, “We are extremely disappointed by the inappropriate remarks made by Houston Rockets General Manager Daryl Morey, who has undoubtedly seriously hurt the feelings of our Chinese fans. Morey has now clarified that his comments do not represent the position of the Rockets or the NBA. … We have great respect for China’s history and culture, and hope that sports and the NBA, can be used as positive energy for unity, and continue to be help build a bridge for international cultural exchanges and bring people together.”

Shame on the NBA for issuing this pathetic apology. And when the NBA refers to its “great respect for China’s history and culture,” does this include the horrendous human rights abuses that the Chinese communist government perpetrates every single day against its own citizens? Or was the NBA referencing China’s recent history of mass slaughter?

In case you weren’t aware, during the past 70 years, the Communist government of China is responsible for more deaths than Hitler or Stalin. In fact, R.J. Rummel, in his excellent book, China’s Bloody Century, estimates that at least 40,000,000 Chinese have died through mass-murder, famine, forced labor, etc. during the communist era (1949 – today).

Unfortunately, the NBA is doubling-down on its fealty to China. Shockingly, at a recent NBA pre-season game between the Philadelphia 76ers and the Guangzhou Loong Lions (a Chinese team) in Philadelphia (the very birthplace of American independence), two fans were ejected for possessing signs supporting Hong Kong inside the Wells Fargo Arena.

Maybe the NBA should take a page from Comedy Central’s South Park “playbook.” On October 2, a South Park episode titled “Band in China” hit the airwaves. The episode mocked the Chinese government and U.S. corporations that bow to China while ignoring the very dark side of its communist regime.

Of course, the Chinese government responded by banning South Park, literally erasing it from existence. Sort of like the Soviet Union’s predilection for “erasing” anyone or anything that was not in line with the Communist party doctrine.

However, South Park, unlike the NBA, refused to cater to the Chinese communists. According to South Park creators Matt Stone and Trey Parker, “Like the NBA, we welcome the Chinese censors into our homes and into our hearts. We too love money more than freedom and democracy. Xi doesn’t look like Winnie the Pooh at all. … Long live the Great Communist Party of China.”

In case you were wondering, Winnie the Pooh, like South Park, is actually banned in China because Chinese bloggers had the temerity to say China’s President Xi looks like Winnie the Pooh, which he certainly does. What next, an all-out ban on Tigger?

Shamelessly, the NBA is more enamored with making money in China than respecting the First Amendment rights of its own fans in America or standing up for American values. Although I am not usually one for boycotts, you can bet your bottom dollar that I will pay much less attention to the NBA this season (while continuing to watch South Park each and every week). I have a sneaking suspicion many more Americans will do the same.