Megan Rapinoe Isn’t a Role Model For My Daughter

Chris Stigall
|
Posted: Jul 11, 2019 12:01 AM
Share   Tweet
The opinions expressed by columnists are their own and do not necessarily represent the views of Townhall.com. 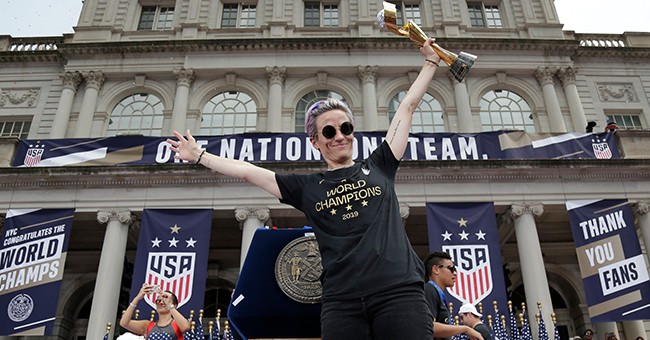 I’ve had it with Megan Rapinoe.  She’s made Colin Kaepernick seem like someone I’d like to have a beer with by comparison.  I don’t care how many people in sports, pop culture, and media tell me otherwise.  She’s not someone I’d want my daughter to admire.

Let’s just tackle the obvious thing off the top, lest the comments section below fill with charges of perceived homophobia.  It’s 2019, ok?  Can we move past talking about gays as though we’re discussing Rock Hudson in Hollywood’s golden age?   We aren’t picking up gossip magazines because “Megan’s courting dames not fellas! Extra! Extra!”

That didn’t stop CNN’s Anderson Cooper from opining with Ms. Rapinoe this week about President Trump’s signature slogan “Make America Great Again,” and what that means to them as gay people.  And in turn, what it means if you’re someone who displays that slogan on a bumper sticker or hat.

“It’s interesting how different people view things through a very personal lens, and who don’t walk in the shoes of other people who didn’t have rights in a past halcyon America.”

I’m 42, Ms. Rapinoe and Mr. Cooper.  I embrace “Make America Great Again” as a slogan and you can hook me up to a lie detector as I explain something to you.  It’s true I don’t know what being ashamed of being gay in the 40s and 50s was like, but I also wasn’t alive to be a part of the shame or shaming.  Are you suggesting I read up on gay bigotry of the mid-century and voted Trump because I hoped an America I never knew would rise again and round up all the gays (Which didn’t happen then either, incidentally)?

As someone with dear friends and immediate relatives who are gay, it’s a disgusting charge.  But trying to prove to people you aren’t a racist, sexist, homophobic bigot is not a fight worth fighting because you’ll never talk someone out of their own bigotry toward you simply because of your vote.

The simple fact of the matter is no liberal thinks America was ever great.  Governor Cuomo of New York said the words last year.  “America was never that great.”  When you spend your entire life thinking there is nothing about the country to celebrate because of specific, real or perceived injustices of the past, “Make America Great Again” is like garlic to a vampire.

To the rest of us normal folks, the slogan is about loving our country as a force for good.  Not a perfect force for good, but on balance we’ve stood for what’s right far more than we haven’t.  We got tired of eight years of President Obama talking about all that was consistently wrong with us as a country.  But when you have a myopic, narcissistic view of the country as applies to your skin color or who you sleep with, you’re not capable of finding pride.  Ok, fine.

That’s still not why I’ve had it with Ms. Rapinoe.  She’s a garden variety liberal in that sense.

It’s also not about her obnoxious and misinformed argument that all of soccer is paying her and the women of her team less simply because they are women.  You’ve heard by now men in soccer earn more because men bring in tons more global viewership, ad dollars, ticket sales, etc.   Perhaps that’s less true domestically, but it’s 2019.  Get an agent and refuse to play until you’re paid what you feel you’re worth if you’re that valuable.  You’ll have your answer soon enough.

Video of Ms. Rapinoe can be found from her “Canyon of Heroes” parade float in which she tells the camera “I deserve this!  I deserve this,” clutching the championship trophy in one hand and a bottle of expensive Champagne in the other.

Proving the old adage incorrect, I guess there is an “i” in team after all.  Compare this to Philadelphia Eagles head coach Doug Pederson and his team after winning the Super Bowl in 2018, kneeling in prayer immediately after.  Their starting quarterback’s personal and charity motto is “Audience of One.”  Meaning, he is playing to honor God first and only.

Later in the day, Ms. Rapinoe encouraged everyone to “be better, love more, hate less, listen more and talk less.”  She ended her plea by telling New Yorkers they’re the “mother f-ing best” for an extra dash of class.

However, that’s not what she really believes or practices.   We know she’s not talking less and we know she doesn’t want to listen to people she hates.  She’s said she will meet with “anyone else that wants to invite us and have a real, substantive conversation, and that believes in the same things we believe in.”  She made very clear days prior she had no intention of going to the “f-ing White House.”

No, Ms. Rapinoe is no role model for my daughter not because she’s gay, or liberal, or misguided.  Simply, she’s self-centered, phony, and vulgar.  That has nothing to do with social issues or politics.  It’s just an appalling lack of character.