The Evangelical Case for Ted Cruz

Chris Skates
|
Posted: Feb 28, 2016 12:01 AM
Share   Tweet
The opinions expressed by columnists are their own and do not necessarily represent the views of Townhall.com. 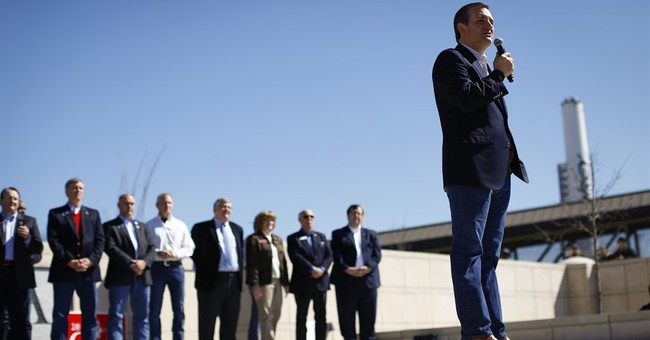 I have said that the people of this country, if ever they lose their liberties, will do it by sacrificing some great principle of government to temporary passion. There are certain great principles, which if they be not held inviolate, at all seasons, our liberty is gone.    John Randolph 1813.

If you are an evangelical Christian reading this, you base your life on principles. Your guiding principles come from the Bible, which you believe to be the living Word of God.  Yet though the Bible ALWAYS speaks truly, it does not attempt to speak comprehensively on all matters. It does not speak comprehensively for example on all matters relating to government. For those we need an outside or auxiliary set of principles (based on the Judeo-Christian ethic to be sure). In the US those principles are outlined in our founding documents, most notably in the Constitution.

The core reason that the US has a culture in the midst of rot, our foreign policy is a haphazard shambles, and our economy is as week as its been in decades (mythical recovery notwithstanding) is because the people we have sent to Washington, not only do not respect founding principles and the constitution, they literally have no familiarity with them or the hard and fast truths they contain.

And then there is Ted Cruz. Cruz’s father Rafael escaped torture at the hands of Fidel Castro came to America to wash dishes at minimum wage and over a period of years built a successful business.  Rafael (as only an immigrant who has seen the extreme left up close can) drilled into his son one truth…only in America.  Only in America could a poor immigrant build a successful business, become a citizen and raise a family.  Copies of both the Constitution and the Bible were constantly out on the family’s kitchen table.

In high school Ted participated in speaking competitions for scholarship money with the Free Enterprise Institute. These efforts required Cruz to spend Saturdays delving deeply into free market principles and the Constitution. By the time he was nineteen Cruz had the Constitution memorized. By then he had given some 80 speeches on constitutional principles to Kiwanis, Rotary Clubs, and other civic gatherings. From this experience he determined he wanted to serve in government. He pursued an Ivy League education by working two jobs and receiving academic scholarships.  His father Rafael’s greatest concern was that Ted would lose his conservative roots and be pulled far toward a far left ideology by these institutions. Instead Ted respectfully debated with his liberal professors throughout his education even winning the respect of the formidable (and very liberal) Alan Dershowitz.

You may know the rest. Cruz went on to become an honor graduate from Princeton and Harvard Law, clerked for Chief Justice Rehnquist, became  Solicitor General for Texas where he argued nine landmark cases before the US Supreme Court winning five, and filed some eighty briefs with SCOTUS.

One unfair criticism I hear of Cruz is that he is a politician. In turn I am told that primary voters are tired of politicians and want an outsider.   Does a single term as a US Senator wherein Cruz has thrown one uppercut after another at what he rightly calls the “Washington Cartel” (including members in, and the leadership of, his own party) make him by some perversion of the term an “insider”?

Upon what basis will Trump make decisions as President that will “make America great again”?  As Cruz has already pointed out, Trump has no idea what made America great in the first place.  Trump has said it himself repeatedly; he can agree with either side and has donated to either side. What good does that do a nation in crisis when one side (the liberal Democrat) is dead wrong on almost every issue? Trump is highly malleable precisely because of his ignorance of founding principles.

The waters we are in are roiling. The next President will need a strong anchor chain tied to principles that have withstood the test of time. He will need not only a passing familiarity with these principles but a deep and abiding knowledge of them. He will need to have based his life upon them. Conservatives have not had such a choice in decades. Now they have Ted Cruz. I pray that more voters will resist the siren call of a so-called tough guy who bases his decisions on his own temporary passions at any particular moment. Because they are by now second nature to him, Ted Cruz is a leader who can readily draw on the highly educated lessons of our forebears.

“By this unprincipled facility of changing the state as often, and as much, and in as many ways as there are floating fancies or fashions, the whole chain and continuity of the commonwealth would be broken. No one generation could link with the other. Men would become little better than the flies of summer.” Edmund Burke.