One trend that stayed on track this week was the dollar gaining ground against the euro, which, combined with low volume, has magnified the downward pressure on gold prices.

The softness in gold prices can be traced to several factors, but it would be unwise to draw too many conclusions from trading this week.

The big news this week was the European Central Bank lowering interest rates to 0.75 percent.  Gold traders expected an expansion of European debt beyond that small concession and the dollar has been on tear against the euro ever since.

Commodity sales are denominated in dollars, so a stronger dollar means lower commodity prices.  Gold and silver were joined on the downside by crude oil, losing 2 percent overnight, along with platinum, palladium and copper.

As you can see from the data, supplied by the St. Louis Federal Reserve, the relationship between government debt and gold prices is tenuous at best.  If there were a significant correlation, gold prices would have started moving higher in the 80s and 90s. 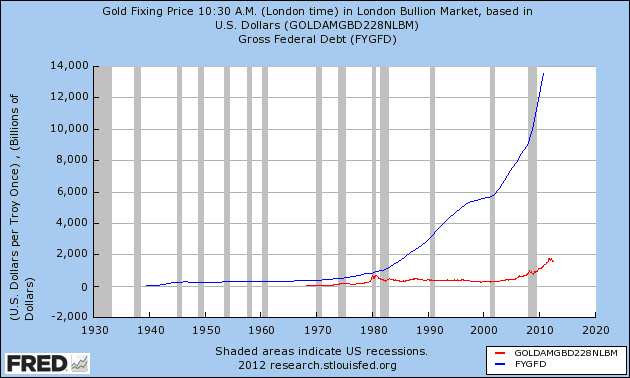 For the time being, currency prices are still the biggest movers of gold and silver prices, apart from the usual amount of market manipulation by big players. We’ll have a clearer picture of the big trends next week when everyone goes back to work.