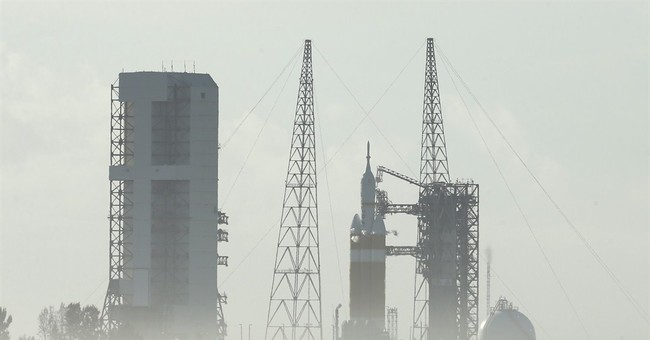 The Washington Post reported that NASA spent $349 million on a rocket test facility that is completely unused. It is an impressive structure, a handsome monument to congressional folly, as the photo shows. The story made me ponder an idea I’ve had for a while. Why not collect similar stories of federal waste and present them in a Museum of Government Failure in Washington?

About 18 million tourists visit D.C. each year. They view the grand government buildings, and they see the monuments to the great political leaders. They learn about the government’s successes in places such as the Air and Space Museum, and they read the pro-government history in places such as the Capitol Visitor Center. They also might notice the man-and-horse statueoutside the FTC, which signifies the government’s heroic battle to strangle trade.

I envision a museum near the Smithsonian that would give tourists a reality-based perspective on the government. It could display a scale model of the NASA rocket facility with photos of the politician responsible, Sen. Roger Wicker (R-Miss.). It could explore failures in history, such as a diorama of a boondoggle Indian trading post from the 1790s. It could have a video screening room showing disgraceful moments caught on tape, such as theAbscam sting of the late 1970s. So if there is a philanthropist out there who wants to educate Americans on the government’s real track record, this is an idea to consider.

I Googled the other day, and was pleasantly surprised that someone is proceeding with such a project. Jim and Ellen Hubbard have proposed a Museum of Government Waste, and have filmed a related movie. I understand that their idea began as an investigation into pork barrel politics, but they are now considering an actual museum. Budget expert David Williams is also involved in the project.

It will be interesting to see what these folks come up with. Good for them for taking the initiative. They should note that the problem in Washington is broader than just “waste” in the sense of porky projects. Instead, it is government failure on a grand scale, meaning the vast spending and regulation that costs us much more than it benefits us, while also reducing our freedom. I’m not sure how that can be captured in museum displays, but it is worth a try. A possible model is the private International Spy Museum in D.C., which gets 600,000 visitors a year.

One issue that a Museum of Government Failure would have to tackle: What should be sold in the gift shop? Perhaps a Lego kit of the Bridge to Nowhere? T-shirts with the humorous “I am not a crook” line? Science kits with experiments in ethanol and other wasteful energy sources?

One thing for sure is that the museum should not take any federal grants: that would guarantee that construction costs would soar!

This Is Probably Why Joe Biden Called It A Day Before 10 AM Yesterday...And Hunter Might Be the Reason.
Matt Vespa