Ms. Rhoads is a veteran of Chicago's famous Second City Touring Comedy Troupe. She was the only woman comedy writer on NBC's The Motown Revue, while also co-starring with Arsenio Hall & Smokey Robinson. As an actress, Ms. Rhoads has guest starred on numerous TV shows like the ABC sitcom Rodney. She also guest-starred with Annie Potts on the hit series Any Day Now. Ms. Rhoads has also been seen on Married…with Children and Saved By The Bell, The Client to name just a few. She was also a regular on two TV series for NBC.

Ms. Rhoads had a recurring role on a family drama with Ben Affleck on Against The Grain. She won the Drama Logue Award for Best Actress in Los Angeles for her work in The Fine Line Comedy Revue, and the Joseph Jefferson award for Best Actress for that same show in Chicago.

Ms. Rhoads is best known to children as Mother Goose in The Mother Goose Video/DVD Treasury. She directed and co-wrote a comedy revue featuring both children and adult actors, Accompanied By Adults at The Groundlings in Hollywood. 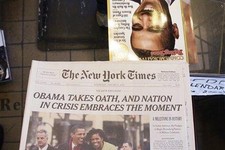 Sorry for the Fringe on Top?
By Cheryl Felicia Rhoads
I was listening to Bill Bennett's radio show and this guy calls in, all upset that he voted for Barack ...
January 28, 2009

The Left Goes Beyond Palin
By Cheryl Felicia Rhoads
"This is a real neighbor against neighbor bloodletting!" Like Barack Obama, I'm from Illinois, but unlike the Senator I'm from ...
September 10, 2008 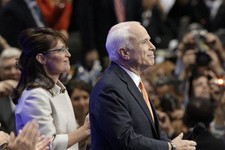 Sarah's Heart. Our Party's Soul
By Cheryl Felicia Rhoads
Who knew just a few months ago..hey - a few weeks...a few days ago? Like many have observed - the ...
September 04, 2008

Two minutes warning
By Cheryl Felicia Rhoads
My best friend's uncle was a writer of some of the best and most classic shows on television when many ...
September 19, 2007

Remembering Merv
By Cheryl Felicia Rhoads
When I was a kid I recall that Merv Griffin would always break from a guest at the commercial and ...
August 13, 2007
Commentary Archives
CARTOONS | Gary Varvel
View Cartoon