Fake News: The Atlantic Smears My Hometown...but Posh Magazines Never Get Called Out for Their Fake News

Charlotte Hays
|
Posted: Jan 13, 2017 12:01 AM
Share   Tweet
The opinions expressed by columnists are their own and do not necessarily represent the views of Townhall.com. 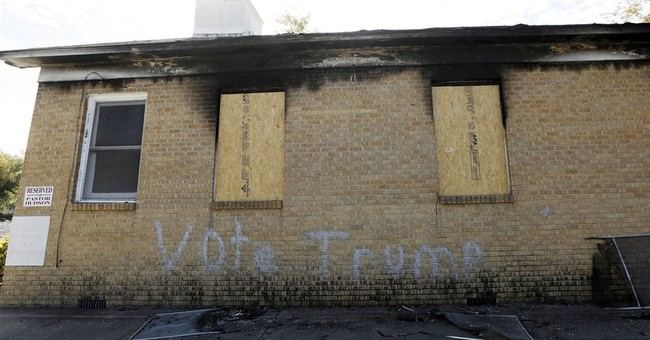 When the Hopewell Missionary Baptist Church, a century-old African-American congregation in downtown Greenville, Mississippi, was burned down last fall, the media wasted no time finding racism.

I mean: What else could it be? This is Mississippi, folks.

Adding fuel to the media fire, a "Vote Trump" message was found spray painted on the side of the burned out shell of a building. "A Black Church Burned in the Name of Trump," The Atlantic headline proclaimed. The motive behind arson, Atlantic reporter Emma Green acknowledged is notoriously difficult to prove. But Green wrote, "In this incident though, someone left a calling card about politics."

Without having the slightest idea who set fire to the Hopewell M.B. Church, Ms. Green forged ahead with interpretations. She opined:

"This act comes with heavy symbolism in the United States. Black churches have long been burned in acts of intimidation and hatred; in the Jim Crow South, members of hate groups would leave flaming crosses on churchyard lawns. The bombing of the 16th Street Baptist Church in Birmingham, Alabama, came at a time of extreme racial division in the United States; it was that crime, which killed four young black girls, that led to the passage of the Civil Rights Act of 1964. 'The black church has always been a symbol of the community,' [Greenville Mayor Errick) Simmons said during a press conference."

"This is a tense time in American politics," Green mused, pointing out that Election Day was a mere week away and that Trump supporters--"including some white nationalists"--were threatening to monitor the polls. This was a lot of blaming when we didn't even know who set the fire.

As I suspected at the time, this turns out not to have been a racial incident. The Atlantic and other news outlets ought to have waited (as I have done) until there was an arrest before treating their theories of the crime as fact. Let's just say that, now that the facts are in, Hopewell M.B. Church is more a symbol of the left's peddling the kind of fake news it believes is endemic to the fevered purlieus of the right.

But I had an advantage over other reporters like the one at The Atlantic: I actually know the people Ms. Green automatically assumes are racists.

Unless Greenville, Mississippi, the small community in the Mississippi Delta, where I was born and raised, had changed beyond recognition since I was last there, it seemed an odd venue for a crime based on race. A famously liberal town (I still love it!) in a famously conservative state, Greenville was an oasis of good race relations during the Civil Rights era. The editor of our local newspaper, the late Hodding Carter (it was his son, Hodding III, who was prominent in the Jimmy Carter administration), crusaded for racial justice and won a Pulitzer Prize in the process of doing so. Far from being punished for their advocacy, the Carters were pillars of the community.

All of us who grew up in Greenville knew by heart the fortunate reason that there was no active Klu Klux Klan in our town. Our parents and grandparents told it to us countless times: it seems that there was an attempt to organize a Klan in the 1920s, but Senator LeRoy Percy (uncle of the novelist Walker Percy) confronted the gathering, thundering that "a gentleman never does anything for which he has to cover his face." That was sufficient to unite the citizens against further incursions from the Klan. I assume there must have been isolated Klansmen somewhere, but Percy killed it as an active force. Moreover, I feel certain that most families, like mine (and we were conservative in all things), tossed material from the White Citizen's Council into the wastebasket with such startling alacrity that an onlooker might be excused for thinking it could singe your fingers.

This is the town that The Atlantic and other news outlets, before anyone knew who had set the fire, smeared as racist. If the crime had been as they thought, I would have been very sad. But that wasn't what had happened at all.

When an arrest was made the guilty party, was, as I expected, not motivated by racism. The alleged perpetrator was a disgruntled, African-American member of the church, Andrew McClinton, who was arrested. Apparently, the older ladies of the church had anticipated that it was a troublesome member who was responsible. They had it right all along. A spokeswoman for the city of Greenville said it "was not a hate crime." Actually, most crimes, whatever the motivation, involve hate, but that is a column for another day. The point here is that this crime was not racially motivated. It has not been reported why Trump was dragged into it--I suspect that the arsonist simply had a good sense of PR and suspected, correctly, as The Atlantic proved, that it would grab attention.

The Atlantic had a brief update saying that McClinton had been arrested but nothing more and certainly no admission that their reporter had shouted racism without any factual basis for the charge. They neglected to note a Go Fund Me page for the rebuilding of Hopewell that has raised $237, 578.

The Democrats are up in arms about so called fake news. It is excuse 1,205 for Hillary Clinton's losing to Donald Trump. Some progressives are even calling for government to monitor and restrict free speech because it’s such a plague. But they always identify fake news as coming from conservative sources and never recognize that the biases of the left are just as likely to produce fake news as those of the right.

But here's the thing about fake news: It can come from any journalist who relies on her biases instead of on facts. Sadly, when it appears in a posh publication such as The Atlantic, it’s rarely recognized and called out for what it is.