Do Or Die Time

Charlotte Hays
|
Posted: Feb 19, 2016 12:01 AM
Share   Tweet
The opinions expressed by columnists are their own and do not necessarily represent the views of Townhall.com. 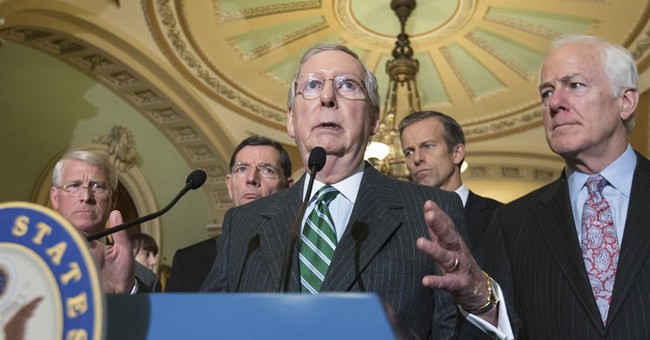 After seven years of being out-maneuvered by the Obama White House, the Senate has one last chance to reassert some of its rightful authority and, at the same time, to quite possibly save the Supreme Court from becoming the last jewel in transformation's crown.

It would be a supreme irony if, in the last year of his transformative presidency, Barack Obama were dealt a severe blow by the Congress he time again has disparaged and overruled.

But I am getting nervous.

Majority Leader Mitch McConnell wisely ruled out holding hearings on any Obama nominee for the seat left vacant by the death last Saturday of Justice Antonin Scalia. But Republican Senator Chuck Grassley of Iowa already is talking about holding hearings--at which it would be just like some Republicans, unable to stand the heat, to cave.

“I would wait until the nominee is made before I would make any decisions,” Grassley has said. “In other words, take it a step at a time.” Where has Grassley been for the last seven years? Does he really believe that there is the remotest chance that President Obama will nominate a man or woman who will uphold the Constitution as written? It is likely that Grassley is just saying this to mollify the media and the Democrats, but even this talk is unnecessary--and, once it starts, it snowballs. Pretty soon we'll have some weak Republicans mouthing similar opinions, and before you know it, we have a new Justice swinging the balance of the Supreme Court.

Republicans are susceptible to media badgering. Remember when the media told President George H.W. Bush that he could be a "statesman" if he reneged on his pledge not to raise taxes? He fell for it, and that pressure was nothing compared to what Republican senators will face during the coming weeks and months.

It's nonsense to argue, as the Democrats are doing, that the Constitution requires the Senate to hold hearings. It must consider any nominee, but that does not mean hearings. The Democrats know that a Supreme Court nominee can be blocked, especially at the end of a term, and thanks to the miracle of video, we know that they know this. By now, you've no doubt seen clips of Senator Chuck Schumer admonishing Democrats to do just that if any Court vacancies arose in the last eighteen months of George W. Bush's presidency. Schumer claims that he meant only after hearings.  Republicans  should take note that it is hearings the Democrats want because they believe that they can appeal to the vanity of a few stray Republicans, who want nothing more than to win press kudos for supposedly being above grubby fray politics by doing a last favor for President Obama,.

Democrats want the public to forget they have made ideology paramount in assessing nominees.  Their despicable treatment of the good and decent and brilliant Robert Bork,  is proof that they know that philosophy matters and the Senate doesn't need to rubber stamp a President's pick.

Unlike with budget battles, in which there are many moving parts, the battle for the Court is simple. The Republicans have the numbers to prevail. There is no excuse if they do not. In this contest, they hold all the cards, if only they have the courage and fortitude.

If there is ever a fight to be fought and courage to be mustered it is now. It won't be pleasant but a loss will seal the fate of the Constitution, which would henceforth be interpreted according to ideology and fad. One commentator said that this is a "hill worth dying on."

I wish I had said that, but I'll resort to a hymn by the anti-slavery poet John Russell Lowell to capture what is at stake and why it is incumbent upon the men and women in the Senate who to stick and not cave. The hymn is the famous one that contains the lines, "Once to every man and nation, comes the moment to decide."

The hymn is out of fashion, partly for the very good reason that in the realm of theology one can make a bad choice and yet have another chance. With this, however, there is only one time to decide. There will not be a redo.

They can do the right thing and still the republic can be lost if the GOP puts forward a suicidal candidate for the presidency, but nevertheless for the men and women of the Republican caucus, this is a once-for-every-man-and-nation choice. If they can't stand at this line, there is no reason to have Republicans.