Charlotte Hays
|
Posted: Jan 08, 2016 12:01 AM
Share   Tweet
The opinions expressed by columnists are their own and do not necessarily represent the views of Townhall.com. 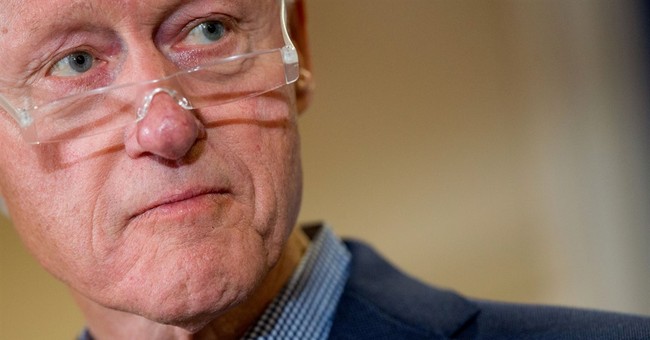 In 1998 the late Marjorie Williams wrote a brilliant piece for Vanity Fair on how the feminist movement had been "neutered" by President Bill Clinton.

Williams recounted how the same feminists who had vocally sided with Anita Hill to almost derail Justice Clarence Thomas's confirmation to the Court were "either silent or dismissive" when the Monica Lewinsky scandal broke.

A self-identified feminist who had voted for Clinton twice, Williams quoted feminist author Susan Faludi to devastating effect. "If anything, it sounds like [Lewinsky] put the moves on him," said the author ofBacklash. Betty Friedan also was quoted weighing in: the NOW founder opined that Clinton's "enemies are attempting to bring him down through allegations about some dalliance with an intern... Whether it's a fantasy, a set-up or true, I simply don't care."

But these attitudes are so pre-Obama. It's true that the feminists of the nineties turned a blind eye to Clinton's sexual misconduct because he would give them the policies they wanted. Mrs. Clinton will also give progressives all they want, but I am not sure that trotting out Bill Clinton as her champion will be an unmitigated benefit today when, thanks to the Obama administration, we are very sensitive to women as victims.

Whatever you think of Donald Trump (and he may well be the man who finally cures my addiction to watching cable news), he had the genius to realize that bringing up Bill Clinton's sexual past may (to borrow a word from the Vanity Fair article) be the best way to neuter Mrs. Clinton's "war on women" ploy for the 2016 campaign. The Big Dog may well turn out to be a frail, white-haired man with a shady sexual history who gives younger women the willies. The argument that people have forgotten doesn't fly: now that Trump has shown how effective it is, Mr. Trump and other candidates, if they have the stomach (and they should), will be refreshing our memories.

For this, all credit goes to the Obama administration and its allies. The Obama administration elevated the notion of a "rape culture" on campus and made this the centerpiece of its outreach to younger women. It used false numbers but that was okay because presenting Democrats as the protectors of women against wicked Republicans was all that mattered. "I've got your back," President Obama tells college women in a federal website devoted to sexual assault on campus. (Thought Experiment: Imagine the reaction if Bill Clinton said that to young women!)

The Obama Department of Education's Office of Civil Rights put out its infamous "Dear Colleagues" letter in 2011. The OCR reinterpreted Title IX in a way that eroded the civil rights of men (and it is always a man) accused of sexual assault on campus. The accuser is seen as the "victim" even before the veracity of her charge has been investigated. Yes, this affects only college women, but attitudes spill over into the general society. And it may spill over into how young women view Bill Clinton and sordid history with women.

Democrats had thought that the hyping of the “rape culture” was their political gold, and a key part of the "war on women" strategy, which presents Obama and Democrats as the defenders of women in our sexist society, and particularly against backward Republicans. Hillary needs the "war on women" as much, if not more, than Barack Obama did, but Trump may have brilliantly set her up so that every time she mentions the "war on women," somebody else will point to Bill and Hillary's own war on the women, at least those who had sexual relations with that man, Mr. Clinton.

I must confess that I was dubious about several of Mr. Clinton's accusers. The idea that Bill Clinton raped Juanita Broddrick, who then waited decades to come forward, seemed not impossible but certainly far-fetched to me. And I could not get my mind around the leader of the free world groping White House aide Kathleen Willey in the Oval Office. But Hillary cleared up these riddles for me. Apparently lacking an irony warning system, Mrs. Clinton recently said to alleged victims of sexual assault, “To every survivor of sexual assault…You have the right to be heard. You have the right to be believed. We’re with you.” Juanita, Kathleen, forgive my skepticism.

I must also confess that I thought bringing up Bill Clinton's sexual misbehavior and his wife's role in fighting back against his accusers would be a mistake. The cliché was that this had been "litigated" in the nineties and the public was okay with it. But that was before the Obama Democrats exalted the notion of female victimhood above all else. Ironic that the biggest victim of this political engineering, may end up being Hillary.