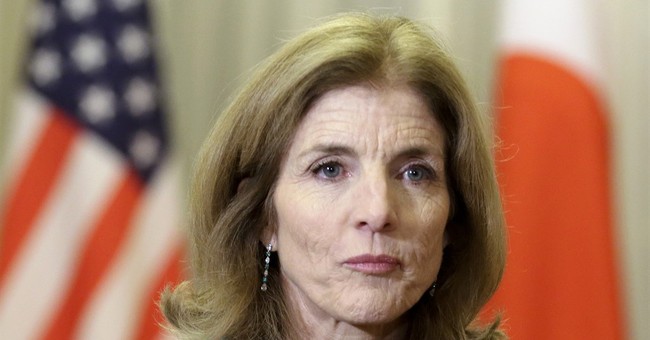 Although a report by an Inspector General gives U.S. Ambassador to Japan Caroline Kennedy a high score for her ethics, the celebrity ambassador appears to be appallingly at sea when it comes to running an actual embassy in a country that is important for the United States.

Indeed, I fear that with all the supposedly funny headlines about Ambassador Kennedy's improper use of private emails for public business--why is this such a problem for Obama diplomats?--we are likely to miss the degree to which our Tokyo embassy is in disarray.

Spotted and analyzed by Claudia Rosett, journalist-in-residence at the Foundation for Defense of Democracies, the OIG report details a situation that might be amusing if it were about, say, an embassy in Lichtenstein. But Japan has the world's fourth largest economy outside North America and enormous political and strategic significance for the United States.

Under Ambassador Kennedy, the Tokyo embassy's "reporting on foreign policy, regional security and bilateral issues is not meeting the needs of senior officials for in-depth, multi-sourced analysis." In other words, our celebrity ambassador may have a full schedule because the Japanese still fondly remember President John F. Kennedy, but the embassy she oversees doesn't really do its diplomatic job. Indeed, the diplomatic report looks more court circular than analysis. As the OIG report puts it: “Daily Activity Report: Widely Read But no Substitute for Analytic Reporting.”

According to the OIG, the embassy has not addressed serious security concerns, including ones previously identified in other reports. The Tokyo embassy also isn't as vigilant about expenses as one might hope. A few sample findings from the report: “living quarters allowance not in compliance with the foreign affairs manual,” “actual lodging cost not properly justified,” and, “premium class train travel policy does not comply with department regulation.” And, oh dear: “Extra travel costs inappropriately approved for using indirect routes.”

It’s not just the budget that isn’t being properly scrutinized and managed. Some softy also appears to be doing staff evaluations, as reflected in this finding: "employee evaluation reports do not reflect demonstrated weakness.”

Speaking of staff, Ambassador Kennedy, who "does not have extensive experience leading and managing an institution the size of the U.S. Mission to Japan," appears to depend upon a Chief of Staff who is "an individual with experience in public relations but not foreign affairs."

There's nothing wrong with celebrity ambassadors. Perle Mesta probably wasn't that hands on when President Harry Truman appointed her to be our ambassador to Luxembourg. But it was Luxembourg. And you can even make a case for giving Caroline Kennedy, who is immensely popular in Japan, an assignment as important as Japan, as long as the State Department takes care to ensure that she has the proper backup to make the embassy run smoothly, within budget, and supply needed political information.

But sending Ms. Kennedy to Japan and actually putting her in charge is a facet of the celebrification of just about everything: We now listen to celebrities as if they actually had something important to say, even when they lack any particular expertise or even basic foundational knowledge of the topic. They expound on the environment, give their views about race or income inequality, even foreign affairs, and instead of dismissing them as perhaps well-meaning but largely uninformed commentators, too much of the media and public pay attention.

Stephen Colbert testified before Congress that immigrants do not take jobs from Americans--he'd prepared by working for a day as a migrant laborer!--while Seth Rogan enlightened the Congress on Alzheimer’s disease. Eva Longoria is advising President Obama on his post-presidency. Some celebrities no doubt are experts on their subjects and have something profound to say. But by and large they are just celebrities.

It is interesting that Ms. Kennedy's endorsement when President Obama was first running for the White House in 2008 carried so much weight. She is of course the daughter of a slain president, and, as such, she will always be occupy a place in our collective psyche. But unlike her Uncle Teddy, who was in the thick of politics, and who also endorsed Obama, she had no particular experience or knowledge to make the endorsement signify. But it did.

I can't help noticing similarities to another celebrity diplomat and email abuser, one who flew around the world constantly, and yet appears to have made terrible decisions, have no discernible achievements, and even to have witnessed the first ambassador slain in the line of duty in three decades on her watch.

It's fine to enjoy celebrities for what and who they are, but mistaking their fame for gravitas and endowing their opinions with authority is a big mistake. Certainly it ought not be a ticket to an important ambassadorship, much less the White House.