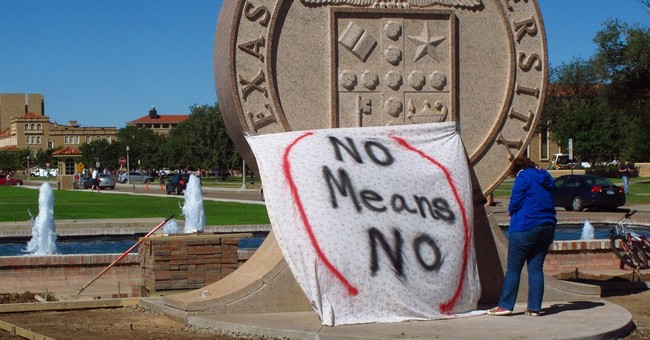 If Law and Order SVU were set in Indiana, the show’s writers would have to rethink a favorite plot line. As of Thursday, when Governor Mike Pence ceremonially signed into law a new rape bill, in Indiana, rapists won’t be immune from prosecution if new evidence turns up after the five-year statute of limitations has run out.

Thus the Law and Order chestnut that features a rapist whose DNA sample is belatedly discovered and proves he is guilty long after the time he can be prosecuted would no longer fly in Indiana. Interestingly, the Indiana bill was signed into law without national fanfare and indeed so quietly that other states might not even know it exists, which is a shame.

In an era when “rape culture,” as it is known, is a feminist talking point, you’d think that feminists would be lining up to praise the bill. You would be wrong. I suspect they are not because the bill is modest in scope and anti-rapist rather than more generally anti-male. It erodes the civil rights of nobody, even accused men, and yet it has the capacity to convict rapists who could otherwise think they’d gotten away with it once enough time passed.

“Jenny’s Law,” is named after Jenny Wendt, a rape victim whose rapist confessed but escaped prosecution because the five-year statute of limitations had expired.

The law does not extend the statute of limitations in general for rape, but it does extend the time frame for prosecution of rape under specific circumstances. These are: new DNA evidence surfaces that identifies the suspect; a tape recording that would have provided enough evidence to charge the suspect is found; and the suspect confesses.

"This bill allows for a prosecutor to initiate charges for up to 5 years after one of [these elements) triggers the new window of opportunity," Indiana state Senator Mike Crider, a backer of the law, explained to a local TV station in the spring. Crider is a Republican and bipartisan support might be another reason Jenny’s Law hasn’t become a national rallying point for feminists. It just doesn’t have that “war on women” oomph.

On that last point—confession of rape by the rapist—there is special relevance for Jenny Wendt. Wendt was raped ten years ago, a brutal rape accompanied by physical injuries. Wendt didn’t report the crime, but her rapist showed up at a police station and confessed to the crime—after the statute of limitations had run out. "He walked into a police station, said, 'I raped somebody,' and he walked out the front door," Wendt recalled in an interview. Jenny’s Law would have enabled prosecution.

This isn’t the only time when feminists and other leftists have failed to champion practical policies that would be likely to actually cut down on rapes, rather than to score ideological points. For example, illegal aliens with sex offender convictions are all too frequently released back into our population. Immigration law is such that illegal immigrants, even ones with sex offender convictions, can’t be held indefinitely if their home countries won’t take them. The Globe reported that 34 of the 424 immigrants with sex offender convictions who were released into our population between 2008 and 2011 are back in jail, and that state records show that some are behind bars for “heinous crimes” that were committed after US Immigration and Customs Enforcement (ICE) freed them. Legislators, turn your attention to this problem and find a fair and legal way to protect us.

Teacher Unions traditionally have opposed making background checks for teachers more stringent, often citing the chance of a “false positive” because of mistakes in the records. This is a smokescreen: a false positive is far easier to identify and deal with fairly than having a secret sex offender on staff and working with kids. When federal legislation to mandate stiffer background checks for teachers came up, Rep. Keith Ellison, the Democrat from Minnesota, opposed it on the grounds that it didn’t allow for the possibility or people reforming their lives. There is also the distinct possibility that people will not reform their lives, which poses a danger to children.

Why is it that practical measures often attract no interest or even the ire of those who shout loudest about the “rape culture” on campus? Sadly it seems that some activists are more interested in waging an ideological battle than in practical outcomes. And—let’s be honest—there are also votes to be had in convincing women that Republicans are waging a war against them. Their ideological and political considerations far outweigh mundane efforts to put real rapists behind bars.