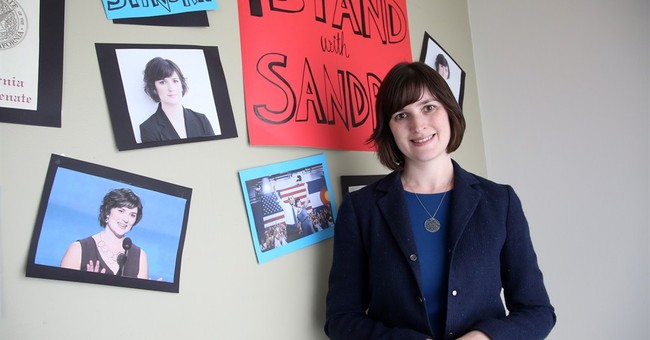 While the “War on Women” rhetoric may have contributed significantly to President Obama’s gaining a second term in 2012, in 2014 it couldn’t even get Sandra Fluke, the former Georgetown Law student who crusaded to make Jesuits pay for birth control, elected dog catcher.

Well, she was really running for a seat in the California state Senate, but, given her retro campaign (she still lives in the halcyon days when Rush Limbaugh called her a naughty name), she probably couldn't have won the county dog catcher slot.

No word yet on the actual dogcatcher races run on a "War on Women" theme, but the carnage at higher levels is of historic proportions. The Senate and House are more Republican than they have been for decades. The Democrats who tied themselves to the “War on Women” ploy will be spending more time with their families.

For example, despite his best efforts, defeated Colorado Senator Mark “Uterus” Udall, whose campaign was described by one pundit as “wall-to-wall gynecology,” was unable to frighten women into believing the GOP was coming for their contraception.

Udall nevertheless continued on this quixotic path even after his opponent, victorious Republican Senator-elect Cory Gardner, came out for making forms of contraception - that are now prescription only - available over the counter. “War on Women” warriors, apparently, do not give up easily.

Other casualties included the gaffe-prone Alison Lundergan Grimes, who, having been trounced by incumbent Kentucky Senator Mitch McConnell, woke up Nov. 5 to the dispiriting reality that nobody gives a tinker’s damn any more who she voted for in 2012, and the similarly gaffe-prone Texas gubernatorial aspirant Wendy Davis.

The deck was always stacked against Davis in red state Texas, but her early supporters thought she would win by beating the “War on Women” drum. That was before she turned into Todd Akin in pink Mizuno Women's Wave Rider 16 Running sneakers. I guess she had to take the sneakers off to put her foot in her mouth, though. A fixation on her opponent, Governor-elect Greg Abbott’s wheelchair, did not serve to make her more—uh—personally attractive.

Iowa Senator-elect Joni Ernst won handily even though her (male) opponent Bruce Braley tried to brand her as anti-woman. (It’s complicated, but the “War on Women” has less to do with actual women and everything to do with promoting big government and dependency.)

Since I am not a fan of identity politics, I note with reservation that all and all the GOP had a good night with women candidates. Shelley Moore Caputo is replacing retiring Democratic Senator Jay Rockefeller from West Virginia, and Mia Love sailed to victory for a House seat from Utah. New York’s Elise Stefanik, 30, became the youngest woman ever elected to Congress.

Why didn’t the “War on Women” help the Democrats in 2014? The better question might be, “Why did it help the Democrats in 2012?” I have a theory: the Democrats and pundits designated this year’s election as an “election about nothing,” but it was really the 2012 race that fits that description. There were serious issues on the horizon in 2012, but the Democrats managed to keep the lid on Pandora’s box. The economy: it’s getting better. Terrorism: hey, Bin Laden is dead, and GM is alive. Benghazi: a movie review gone bad.

But you can hide the truth only so long, and Democrats couldn’t keep the lid on in 2014. ISIS can’t be passed off as the result of a video, and stagnant wages are all too real for millions of Americans. The joke version of this harsh reality was contained in an email I received from a friend: “When you go to vote on Tuesday, ask yourself this question: Am I more likely to be broke, infected, or beheaded than I was six years ago?”

The “War on Women” was always a luxury item—something to use in a frivolous campaign year. But the chips are down abroad and things are hard at home. The GOP never cared one way or the other about a woman’s birth control, and so the whole controversy was phony. I think the Democrats, in designing the “War on Women,” opted to make birth control and “issue” precisely because most people in the U.S. don’t have moral qualms about it. But, in defending the right to religious liberty of people who do have moral reservations, the GOP could be painted as backward and dangerous.

But that was then, and this now. And now, with a dangerous world becoming more dangerous by the minute, we don’t want to waste time debating whether Jesuits and evangelical Christians should be browbeaten into picking up the tab for Sandra Fluke’s birth control. We aren’t thinking about the luxury item—the “War on Women” item—this year but about the basic, everyday items, such as defending our nation from terrorism and paying for health insurance under the burdens imposed by ObamaCare.

In 2014, the voters got real, and it inevitably followed that the “War on Women” was exposed for the sham it always was.