Ebola and the Affordable Care Act 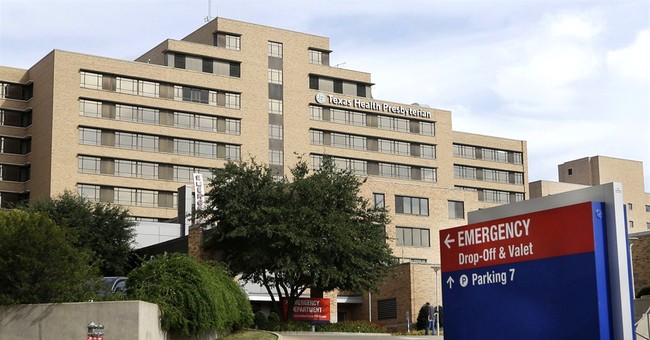 “When the Ebola case was diagnosed, we went in to crisis mode," Ed Garcia, the managing director of Firestone Liberia, recently told NPR.

In a saga that commentator Scott Ott characterizes as one of “an evil capitalist corporation” springing into action for the commonwealth, Firestone employees in Liberia stopped the spread of Ebola in their area by taking quick actions after an employee showed symptoms of the deadly disease.

When no hospital in the area could take the stricken woman, Firestone staff built an onsite treatment center in record time. The Firestone employees set up an Ebola ward so quickly that the woman was placed in it the day after she reported symptoms. Firestone employees also began a door-to-door campaign to educate people about Ebola.

NPR reported on how the staff was able to act so quickly and creatively:

“None of us had any Ebola experience,” [Garcia] says. They scoured the Internet for information about how to treat Ebola. They cleared out a building on the hospital grounds and set up an isolation ward. They grabbed a bunch of hazmat suits for dealing with chemical spills at the rubber factory and gave them to the hospital staff. The suits worked just as well for Ebola cases.

Firestone immediately quarantined the family of the woman. Like so many Ebola patients, she died soon after being admitted to the ward. But no one else at Firestone got infected: not her family and not the workers who transported, treated and cared for her.

Compare this with the Keystone Cop antics of the CDC and Dallas health officials (who originally sent the nation's first Ebola patient home with antibiotics and a pain reliever). Perhaps surprisingly for a news outlet that is in part government-supported, NPR headlined its online report this way: “Firestone Did What Governments Have Not: Stopped Ebola In Its Tracks.” Ott was harsher, writing, “The sick and suffering people of Africa don’t need more political speeches, government press releases, and empty promises. They need more Firestones.”

And what about the United States? Do we need more government press releases and promises about health care—or do we need a healthcare system that empowers patients and physicians rather than bureaucrats?

It becomes clear with every passing day that the system of government health care created by the Affordable Care Act—which launched a year ago this month—embodies everything that is wrong with massive government schemes.

This week’s Affordable Care Act horror story is that Wal-Mart will eliminate healthcare coverage for 30,000 part-time workers because of cost increases occasioned by the Affordable Care Act. Wal-Mart is not alone in having to cut or curtail coverage for employees because of ObamaCare. The legislators who voted for the law seemed to believe the impossible: that mandating that everyone must have extensive health insurance coverage, and subsidizing coverage for millions more people, many of them sick, elderly, or poor, would not result in skyrocketing premiums and new government healthcare costs. We now know how wrong that supposition was. As for the promise that the Affordable Care Act would reduce the deficit, Roll Call recently reported that the Congressional Budget Office now admits that it can no longer even estimate the fiscal effects of the system.

“The ACA’s financing provisions were assumed to be effective so as to get a favorable score out of CBO upon enactment, but no one is keeping track of whether they’re being enforced,” Charles Blahous, an analyst at the Mercatus Center, told Roll Call. “We receive occasional updates on the gross costs of the law, but none on whether the previously projected savings provisions are producing what was originally projected.”

A public trustee for Social Security and Medicare, Blahous added that “there’s no barrier to continually rolling back the financing mechanisms without the effect on the ACA’s finances ever being fully disclosed.”

An evil capitalist corporation such as Firestone (or any successful corporate entity) simply wouldn’t operate this way: it would have clear financial projections and know what is working and what isn’t. It would be free to encourage innovation, and also quick dump innovations that didn’t live up to their promise.

A private company—unlike government—has to be sensitive to whether its customers are being served in a way that retains their loyalty. Not so when government is in charge, and thus today millions of those newly insured through ObamaCare are finding that having insurance doesn’t mean that they can find someone to treat them.

Americans shouldn’t accept the new even more bureaucratic health care system created by the Affordable Care Act. We can and need to do better. Next week is Health Care Solutions Week, an initiative of the Independent Women’s Forum, to raise awareness of alternatives to ObamaCare.

Americans must go back to the drawing board and refocus our efforts on creating a health care system that blends private enterprise and patient-empowerment. We want better treatment and lower prices and wider coverage. In other words we can build on the lessons learn from Firestone and the Ebola outbreak; we want more evil capitalist and less good-hearted government.