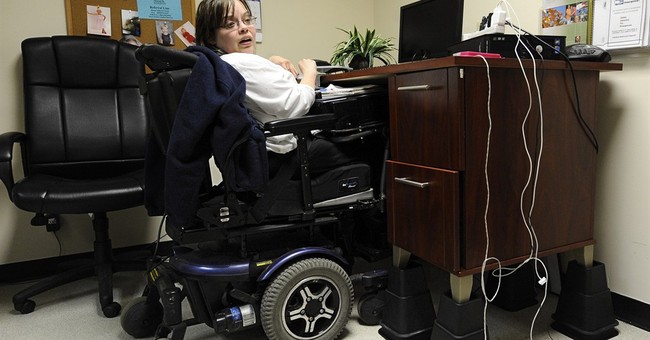 One of the questions I pose in my forthcoming book When Did White Trash Become the New Normal? is this: Should I limp when I’m at the disability office?

At the risk of sounding flip about something with deeply serious implications for our nation, I must say that Senator Tom Coburn’s investigation of fraud and abuse in the Social Security Administration's Disability program definitively answers my question: Don’t bother. Just find the right lawyer.

That’s no problem as disability lawyers advertise constantly on TV. My own personal favorite is Charles Binder, the guy with the cowboy hat and the soothing sign-off: “We'll deal with the government. You have enough to worry about.”

Being disabled is often not the chief worry of DI applicants.

There is something particularly despicable about anybody who would game the Social Security disability system, imperiling the program for people who are genuinely in need of such assistance. But countless people are doing just that. Heather Mac Donald—the Manhattan Institute’s Cassandra—began sounding the alarm in 1995 with a groundbreaking City Journal article about an able-bodied and hardworking family, which, alas, put its impressive energies into obtaining DI payments instead of finding more meaningful work. Since then, things have only gotten worse.

When it began, the disability insurance (DI) program was small and inexpensive. Applicants were vetted and the able-bodied turned away. The number of people on DI in 1960 was around 455,000; by 2011, the number had skyrocketed to 8,600,000. The budget for DI is $135 billion a year, topping the costs of the departments of Homeland Security, Justice, and Labor combined.

Even this figure is misleading: after two years on DI, the recipient is eligible for Medicare, regardless of age, adding immensely to the taxpayer’s burden. DI benefits are not lavish, amounting to around $1,100 a month. This often adds up, however, to lifetime benefits of around $300,000. Disability lawyers, on the other hand, can pull down princely sums. Dare I say they make out like bandits?

Senator Coburn's report, jointly released Oct. 7 by the Senate’s Homeland Security and Governmental Affairs Committees, and featured last Sunday on "60 Minutes," shows how legal and medical personnel are exploiting the system and in the process creating a national disaster. Government reports can make for pretty dull reading. But this one is a page turner. Not since the Starr Report, which dealt with shenanigans in the Clinton White House, have I found myself unable to put down a government document. And this report is far more important than the Starr Report, dealing, as it does, with a costly and widespread form of moral rot.

The star of the report is Eric Conn, who, according to the report, has built the largest and most lucrative disability practice in the country. Conn, whose office is in Stanville, Kentucky, on the West Virginia border, was also the subject of a Wall Street Journal expose. For a disability lawyer, winning is everything. They only get paid of their client wins. Then they are paid by the government, which deducts the fees from what the client receives.

The system has worked well for Conn. “At the height of his success in 2010, Mr. Conn employed nearly 40 people and obtained more than $3.9 million in legal fees from [the Social Security Administration], making him the agency’s third highest paid disability lawyer that year,” the Coburn report notes.

It hasn’t hurt that most of Conn’s cases were heard by Administrative Law Judge David Daugherty, in the SSA’s regional Huntington, West Virginia Office of Disability Adjudication and Review. In 2010, Judge Daugherty, who is currently on administrative leave, ruled against only four of the 1,284 cases he heard. This record is all the more astonishing when one realizes that these were cases that had previously been turned down and were on appeal. Daugherty reportedly okayed around $25 billion in DI benefits in his last years as an administrative law judge.

No wonder the judge and lawyer reportedly took pains to work together. According to the Coburn report, "Judge Daugherty telephoned the Conn law firm each month and identified a list of Mr. Conn’s disability claimants to whom the judge planned to award benefits. Judge Daugherty also indicated, for each listed claimant, whether he needed a ‘physical’ or ‘mental’ opinion from a medical professional indicating the claimant was disabled."

Conn also seems to have had favorite doctors, some of whom have suspect credentials, including a history of malpractice payouts, but nevertheless were paid substantial fees to fill out DI forms. According to the report, a review of records found that over the past six years Conn paid five doctors almost $2 million for paper work on disability clients. (He contracted these fees with claimants.)

And the medical work wasn’t that demanding. The Conn firm reportedly supplied doctors with a set of five different pre-filled out forms for hundreds of clients. Some doctors met clients at the “medical suite” in Conn’s law offices. Fifteen minutes was a normal visit. This meant that a single doctor could see up to 35 claimants in a day. An indication about how widespread this abuse is: a businessman in my hometown ruefully told me that there is a local doctor widely known as the go-to man for DI benefits, even (or especially) if you are in the pink of health.

Although Coburn made it abundantly clear on “60 Minutes” that he doesn’t begrudge DI payments to the genuinely disabled, the senator, who is also a physician, was lambasted for being anti-sick person. “The news program's theme was that disability recipients are ripping off the taxpayer,” charged Michael Hiltzik of the Los Angeles Times, a Pulitzer Prize winner, no less, in a story describing the “shameful attack on the disabled.” Did Mr. Hiltzik really see “60 Minutes?” Coburn was critical of the non-disabled who, with help from lawyers, doctors, and judges, are ripping off the system.

Coburn acknowledged that many able-bodied DI claimants are desperate because the economy is so bad that they can’t find work. Nevertheless, DI wasn’t set up to deal with the outcomes of a bad economy but to help keep people who truly can’t work. Can DI be saved for those who really need it? There are some fixes: a healthy skepticism about the cases claimants present and the presence of a representative of the Social Security Administration—or better still, a taxpayer’s advocate—at DI hearings would be a start.

The reason fraud escapes detection, the report indicates, is that judges face tremendous pressure to get through the backlog of DI applicants. Before you suggest hiring more judges, let me propose a simpler fix: if only the truly disabled got DI, if the fakes were turned away, the lines of people applying would be shorter. Our friend with the cowboy hat is involved in DI law because it’s a gold mine. It shouldn’t be. It was designed for the disabled, not for lawyers and shady doctors.

Of course, if there is a move to institute such changes, there will be an outcry. The Michael Hiltziks will accuse reformers of hating the disabled, and the public will be swayed. Or will it be? We may be reaching a point where the taxpayer is sick and tired of being ripped off—and the majority of Americans are appalled when our government offers citizens inducements to give up on work and cheat through an ill-supervised program that ends up helping lawyers and doctors, rather than the disabled.