When the Phony “War on Women” Becomes Moot 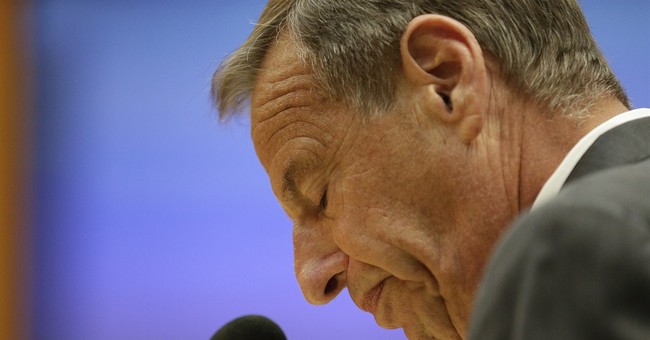 It’s been a bad week for the metrosexual male.

Could it be that the time for the staunch masculine virtues to play a role in the affairs of men (oops!) has rolled around again? A delightful throwback to the halcyon 1950s, Tony Abbott reminds me of my own uncles and the fathers of my contemporaries. Some of his pronouncements are Rick Santorum on steroids—but without the icky sweater. He has reminded women that instead of sending the laundry out it's cheaper to do their own ironing!

Yet Abbott just won a landslide victory in a bitter campaign in which Labor pulled out the "war on women" meme that was instrumental in giving President Obama a second term. Comparisons are in order.

There was also a Julia in Mr. Abbott’s life in 2012—former Australian Prime Minister Julia Gillard, who, alas, is not at all fictional, and who viciously attacked Abbott from the floor of the Australian House in what is widely referred to as her “misogyny speech.”

The occasion for Ms. Gillard’s 15-minute rant was that Abbott sought to sack Speaker of the House Jack Slipper, her ally, because the Slipper had slipped up and gotten caught sending vulgar emails to a female staffer. The emails, among other unsuitable things, compared female genitalia to a shellfish. While Ms. Gillard condemned the—uh—banter, she nevertheless thought it was the right time to attack Abbott.

“I will not be lectured about sexism and misogyny by this man,” Gillard said, gesturing towards the gallant Abbott. “If he wants to know what misogyny looks like in modern Australia, he doesn’t need a motion in the House of Representatives, he needs a mirror.”

Sadly, one imagines such a charge would have been devastatingly effective were in tried in the United States. One recalls the furor over Mitt Romney’s “binders full of women” remark. Americans seemed anxious to read some hidden misogyny in his eager attempt to demonstrate that he goes to great lengths to hire female staff. Australians, however, apparently didn’t buy the charge that Abbott was a raging sexist merely because he had conservative leanings and he won in a landslide.

No matter who is the Democratic standard bearer in 2016, the “war on women” rhetoric will be a key weapon against the Republican nominee. It worked once, and so why not? If the Democratic nominee is Hillary Clinton, rather than celebrating that a woman is leading the ticket, the Democrats will build on the notion that a woman is “owed” the White House. So Abbott’s triumph, despite his having been characterized as a sexist troglodyte, is something Republicans should study.

I have a theory for why Abbot was able to survive this rhetorical: He didn’t get his feelings hurt. You could feel how unfair Romney felt the trumped up “binders of women” controversy to be, as you can feel Republicans at the thought of voting against any legislation that the Left claims helps women.

But Abbott never seemed frightened by the “war on women” hype. He was comfortable in his skin in the same way that fathers in the 1950s were comfortable in theirs. Don’t get me wrong. I love women politicians—or some of them. The irony is that sometimes women politicians are more manly than the guys because they guys are so afraid of the women. Margaret Thatcher, for example, I regard as one of the three greatest figures of recent times (Pope John Paul II and Reagan are the other two). Germany’s Angela Merkel has sometimes seemed to be the only person standing between Europe and financial oblivion. Heck, I even have a soft spot for village-razing Boadicea, who led a revolt against the Romans. But I want men to be less afraid of them. We need more of the decisiveness of the Abbotts and Putins. It was galling to have Czar Vladimir lecture us on American exceptionalism, but you have to admit: the guy is a leader.

One more thing. Abbott was propelled to his sweeping victory by his opposition to an economically-damaging carbon emissions tax and his promise to crack down on illegal immigration. Neither of these factors is likely to give solace to Democrats.

Maybe the lesson of Australia is that, when real issues are paramount in the public consciousness, the phony “war on women” becomes moot. I have a hunch that, after three more years of President Obama, more substantial issues than the war on women will occupy our attention.