Toyota and the Price of Modernity 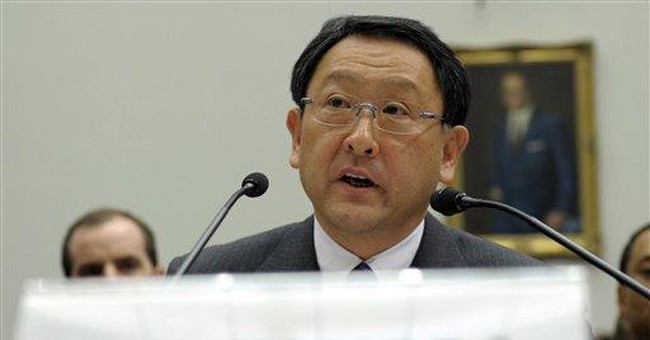 WASHINGTON -- Amazingly, the congressional hearings on Toyota were relatively civilized. Apart from some inevitable theatrical hectoring, the questioning was generally respectful, the emotions controlled. This was all the more remarkable given the drama of some of the testimony, such as that offered by a tearful Rhonda Smith, who recounted how, in her runaway Lexus, she had called her husband because "I wanted to hear his voice one more time."

Such wrenching and compelling stories might impel you to want to string up the first Toyota executive you find. But the issue here is larger and highly complex.

Industrial society produces an astonishing array of mass-produced products -- cars, drugs, medical devices -- that are at once wondrous and potentially lethal.

The wondrousness sometimes eludes us. Even the lowliest wage earner has an automobile that conveys him with more luxury, more freedom, more comfort than any traveling king ever experienced in all the centuries before the 20th. And modern medicines -- why, vaccines alone -- have prevented more suffering, more debility and more death than anything ever conceived by man.

But these wonders can be lethal. And sorting out the endless complaints about these products is maddeningly difficult -- though sort you must, otherwise every complaint would require shutting down the factories, and we'd have no industrial society at all.

The question is: How do you distinguish the idiosyncratic failure from the systemic -- for example, the single lemon that came off the auto assembly line versus an intrinsic problem inherent in that model's engineering? How do you separate one patient's physiology producing a drug side effect versus an intrinsic problem with a drug that makes it unacceptably dangerous?

Consider the oddity of those drug commercials on television. Fifteen seconds of the purported therapeutic effort, followed by about 45 seconds of a rapidly muttered list of horrific possible side effects. When the ad is over, I can't remember a thing about what the pill is supposed to do, except perhaps cause nausea, liver damage, projectile vomiting, a nasty rash, a four-hour erection and sudden death. Sudden death is my favorite because there is something comical about it being a side effect. What exactly is the main effect in that case? Relief from abdominal bloating?

And how many sudden deaths does it take until we say: "Enough," and pull the drug off the market?

It's not an easy calculation. Six years ago, Vioxx, a powerful anti-inflammatory, was withdrawn by the manufacturer because it was found to increase the risk of heart attack and stroke from 0.75 percent per year to 1.5 percent. The company was pilloried for not having owned up to this earlier, but some rheumatologists were furious that the drug was forced off the market at all. They had patients with crippling arthritis who had achieved a functioning life with Vioxx, for which they were quite willing to risk a long-shot cardiac complication. The public furor denied them the choice.

And don't imagine that we do not coldly calculate the price of a human life. In 1974, the speed limit was lowered to 55 mph to conserve oil. That also led to a dramatic drop in traffic fatalities -- approximately 3,000 lives every year. This didn't stop us, after the oil crisis, from raising the speed limit back to 65 and beyond -- knowing that thousands of Americans would die as a result.

The calculation was never explicit but it was nevertheless real. We were quite prepared to trade away a finite number of human lives for speed, and for the efficiency and convenience that come with it.

This is not to let Toyota off the hook simply because all products carry risk. Toyota executives have already admitted that they had underplayed the reports of sticking accelerators. They seem finally to have made a very serious, almost frantic, effort to correct what can be corrected -- the floor mat and sticky accelerator problem -- while continuing to investigate the more elusive possibility (never proved, perhaps never provable) of some additional electronic glitch.

But it is no disrespect to the memory of those killed, and the sorrow of those left behind, to simply admit that even the highest technology produced by the world's finest companies can be fallible and fatal, and that the intelligent response is not rage and retribution but sober remediation and recognition of the very high price we pay -- willingly pay -- for modernity with all its wondrous, dangerous bounty.