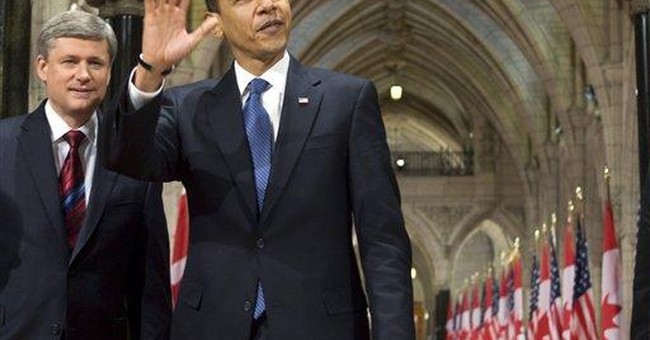 WASHINGTON -- The Biden prophecy has come to pass. Our wacky veep, momentarily inspired, had predicted last October that "it will not be six months before the world tests Barack Obama." Biden probably had in mind an eve-of-the-apocalypse drama like the Cuban Missile Crisis. Instead, Obama's challenges have come in smaller bites. Some are deliberate threats to U.S. interests, others mere probes to ascertain whether the new president has any spine.

Preliminary X-rays are not very encouraging.

(a) Pressuring Kyrgyzstan to shut down the U.S. air base in Manas, an absolutely crucial NATO conduit into Afghanistan.

(b) Announcing the formation of a "rapid reaction force" with six former Soviet republics, a regional Russian-led strike force meant to reassert Russian hegemony in the Muslim belt north of Afghanistan.

(c) Planning to establish a Black Sea naval base in Georgia's breakaway province of Abkhazia, conquered by Moscow last summer.

(d) Declaring Russia's intention to deploy offensive Iskander missiles in Kaliningrad if Poland and the Czech Republic go ahead with plans to station an American (anti-Iranian) missile defense system.

President Bush's response to the Kaliningrad deployment -- the threat was issued the day after Obama's election -- was firm. He refused to back down because giving in to Russian threats would leave Poles and Czechs exposed and show the world that, contrary to post-Cold War assumptions, the U.S. could not be trusted to protect Eastern Europe from Russian bullying.

The Obama response? "Biden Signals U.S. Is Open to Russia Missile Deal," as The New York Times headlined Biden's Feb. 7 Munich speech to a major international gathering. This followed strong messages from the Obama transition team even before the inauguration that Obama was not committed to the missile shield. And just to make sure everyone understood that the Bush policy no longer held, Biden in Munich said the U.S. wanted to "press the reset button" on NATO-Russian relations.

Not surprisingly, the Obama wobble elicited a favorable reaction from Russia. (There are conflicting reports that Russia might suspend the Kaliningrad blackmail deployment.) The Kremlin must have been equally impressed that the other provocations -- Abkhazia, Kyrgyzstan, the rapid reaction force -- elicited barely a peep from Washington.

Iran has been similarly charmed by Obama's overtures. A week after the new president went about sending sweet peace signals via al-Arabiya, Iran launched its first homemade Earth satellite. The message is clear. If you can put a satellite into orbit, you can hit any continent with a missile, North America included.

And for emphasis, after the roundhouse hook, came the poke in the eye. A U.S. women's badminton team had been invited to Iran. Here was a chance for "ping-pong diplomacy" with the accommodating new president, a sporting venture meant to suggest the possibility of warmer relations.

On Feb. 4, Tehran denied the team entry into Iran.

Then, just in case Obama failed to get the message, Iran's parliament speaker rose in Munich to offer his response to Obama's olive branch. Executive summary: Thank you very much. After you acknowledge 60 years of crimes against us, change not just your tone but your policies, and abandon the Zionist criminal entity, we might deign to talk to you.

With a grinning Goliath staggering about sporting a "kick me" sign on his back, even reputed allies joined the fun. Pakistan freed from house arrest A.Q. Khan, the notorious proliferator who sold nuclear technology to North Korea, Libya and Iran. Ten days later, Islamabad capitulated to the Taliban, turning over to its tender mercies the Swat Valley, 100 miles from the capital. Not only will sharia law now reign there, but the democratically elected secular party will be hunted down as the Pakistani army stands down.

These Pakistani capitulations may account for Obama's hastily announced 17,000 troop increase in Afghanistan even before his various heralded reviews of the mission have been completed. Hasty, unexplained, but at least something. Other than that, a month of pummeling has been met with utter passivity.

I would like to think the supine posture is attributable to a rookie leader otherwise preoccupied (i.e. domestically), leading a foreign policy team as yet unorganized if not disoriented. But when the State Department says that Hugo Chavez's president-for-life referendum, which was preceded by a sham government-controlled campaign featuring the tear-gassing of the opposition, was "for the most part ... a process that was fully consistent with democratic process," you have to wonder if Month One is not a harbinger of things to come.