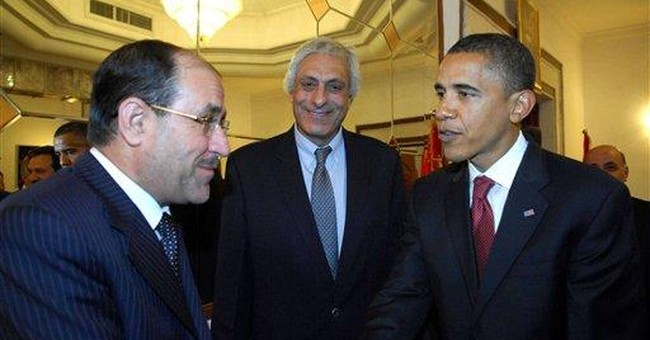 WASHINGTON -- In a stunning upset, Barack Obama this week won the Iraq primary. When Prime Minister Nouri al-Maliki not once but several times expressed support for a U.S. troop withdrawal on a timetable that accorded roughly with Obama's 16-month proposal, he not only legitimized the plan. He relieved Obama of a major political liability by blunting the charge that, in order to appease the MoveOn left, Obama was willing to jeopardize the astonishing success of the surge and risk losing a war that is finally being won.

What is Maliki thinking? Clearly, he believes that the Iraq War is won. Al-Qaeda is defeated, the Sunni insurgency is in abeyance, the Shiite extremists are scattered and marginalized. There will, of course, be some continued level of violence, recurring challenges to the authority of the central government and perhaps even mini-Tet offensives by both Shiite and Sunni terrorists trying to demoralize U.S. and Iraqi public opinion in the run-up to their respective elections. But in Maliki's view, the strategic threats to the unity of the state and to the viability of the new democratic government are over.

Maliki believes that his armed forces are strong enough to sustain the new Iraq with minimal U.S. help. He may be overconfident, as he has been repeatedly in estimating his army's capacities, most recently in launching a somewhat premature attack on militias in Basra that ultimately required U.S. and British support to succeed. And he is certainly more confident of his own capacities than is Gen. David Petraeus.

Whether warranted or not, Maliki's very confidence allows him to set out a rapid timetable for U.S. withdrawal, albeit conditioned on continuing improvement in the security situation -- a caveat Obama generally omits. But Maliki calculates that no U.S. president, whatever his campaign promises, would be insane enough to lose Iraq after all that has been gained and then be saddled with a newly chaotic Iraq that would poison his presidency.

So Maliki is looking ahead, beyond the withdrawal of major U.S. combat forces, and toward the next stage: the long-term relationship between America and Iraq.

With whom does he prefer to negotiate the status-of-forces agreement that will not be concluded during the Bush administration? Obama or McCain?

Obama, reflecting the mainstream Democratic view, simply wants to get out of Iraq as soon as possible. Two years ago, it was because the war was lost. Now, we are told, it is to save Afghanistan. The reasons change, but the conclusion is always the same. Out of Iraq. Banish the very memory. Leave as small and insignificant a residual force as possible. And no long-term bases.

McCain, like George Bush, envisions the U.S. seizing the fruits of victory of a bloody and costly war by establishing an extensive strategic relationship that would not only make the new Iraq a strong ally in the war on terror but would also provide the U.S. with the infrastructure and freedom of action to project American power regionally, as do U.S. forces in Germany, Japan and South Korea.

For example, we might want to retain an air base to deter Iran, protect regional allies and relieve our naval forces, which today carry much of the burden of protecting the Gulf, thus allowing redeployment elsewhere.

Any Iraqi leader would prefer a more pliant American negotiator because all countries -- we've seen this in Germany, Japan and South Korea -- want to maximize their own sovereign freedom of action while still retaining American protection.

It is no mystery who would be the more pliant U.S. negotiator. The Democrats have long been protesting the Bush administration's hard bargaining for strategic assets in postwar Iraq. Maliki knows the Democrats are so sick of this war, so politically and psychologically committed to its liquidation, so intent on doing nothing to vindicate "Bush's war," that they simply want out with the least continued American involvement.

Which is why Maliki gave Obama that royal reception, complete with the embrace of his heretofore problematic withdrawal timetable.

Obama was likely to be president anyway. He is likelier now still. Moreover, he not only agrees with Maliki on minimizing the U.S. role in postwar Iraq. He now owes him. That's why Maliki voted for Obama, casting the earliest and most ostentatious absentee ballot of this presidential election.