ObamaCare: No Dream For My Father 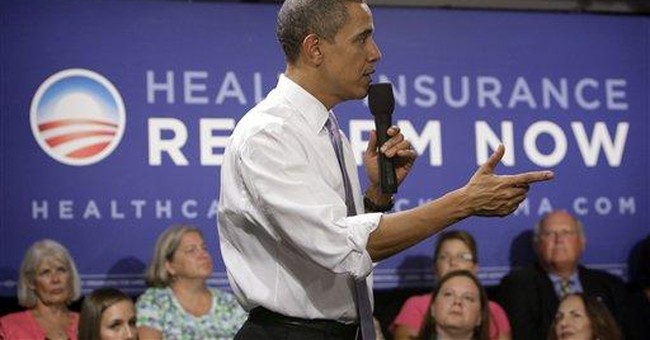 What a relief it was to learn from the President that he has no plans, as he recently put it, to “pull the plug on Grandma.” Cute phrase, isn’t it?

Certainly, it’s easy to be flip if, like the President, one is in one’s forties, in vibrant health – and powerful enough to ensure that loved ones will receive all the treatment they will ever need. But for those who will have to live as regular people under whatever health care regime America eventually adopts, it’s much more difficult to dismiss with a laugh what, exactly, ObamaCare would mean for the sick and the elderly.

I’m thinking of my father, who died just three weeks ago at the age of 83. Hospitalized with an acutely inflamed gall bladder, he was scheduled for surgery the next day before slipping unexpectedly into cardiac arrest.

Under the “reformed” medical system that the President seeks, it’s not pleasant to speculate about what the past few years would have meant for Dad. He was in fragile health; having survived prostate cancer 19 years ago and a triple bypass five years later, he had been undergoing peritoneal dialysis since a health crisis two years ago. There’s no doubt that he fell into the category the President has described as “the chronically ill and those toward the end of their lives” who “are accounting for potentially 80% of the total [cost of] health care.” So under ObamaCare, at what point would his life have been deemed to be no longer “worth” saving?

The question matters because notwithstanding his various health challenges, my father had been actively enjoying his friends, his activities, his grandchildren and his life until the day before he died. He had practiced medicine up until the age of 76, just seven years ago. Whatever his health profile looked like on paper – the only way a “cost containment” bureaucrat would ever have encountered it – his life was precious both to him and to those of us who loved him.

That’s why I’m grateful that he wasn’t required by some version of ObamaCare to participate in “end of life counseling,” where someone who knew nothing about him – and couldn’t have cared less – might have tried to convince him that he (and his children) would be better off if he were dead. I’m grateful for the doctors and nurses who tested him, treated him, and succeeded in giving him the few extra years that allowed him to meet his grandchildren. And I’m grateful to the team at the hospital where he died – who worked hard for twenty minutes to save an 83-year-old man without a heartbeat who would, no doubt, have been deemed by any “cost containment” bureaucrat to be consuming far more than his “fair share” of resources.

There’s no question my father deserved such treatment. He spent his life caring for patients and pioneering new techniques of anesthesia that promised safer, more comfortable surgery. When he finally retired, the hospital where he had practiced so faithfully for 48 years named its emergency and surgical wing in his honor; the mayor offered him a key to the city; and more than 300 former patients showed up to wish him well at a farewell reception hosted by the hospital. Surely the lifesaving, humane treatment that marked his final years was no more than this good man’s due.

But the beautiful thing about American medicine has been its foundational assumption that such lifesaving, humane treatment is everyone’s due. At least until now, there’s been no question about whether someone’s life is “worth” saving; we’ve presumed that everyone’s life is important – not just those of the powerful or the important or the connected. Or the young.

Once government mandates replace market forces in allocating health services, the resulting rationing will do more than destroy the most innovative medical system in the world. It will do more than reorient Americans’ relationships with their government to make them more dependent than ever before. At its core, it will ask Americans to surrender their most fundamental beliefs about the value of human life.

Two weeks ago at my father’s memorial service, I learned from a colleague how opposed Dad had been to the institution of Medicare, not because of the financial regulations it imposed, but because of what it meant for patient care. According to his friend, my father had predicted that once the government became involved in the health care system, government wouldn’t let go until it – rather than physicians – was making the final decisions about who could be treated, and how.

Thank Heaven my father will never have to live under the brave new world of ObamaCare. Let’s hope the rest of us don’t have to, either.