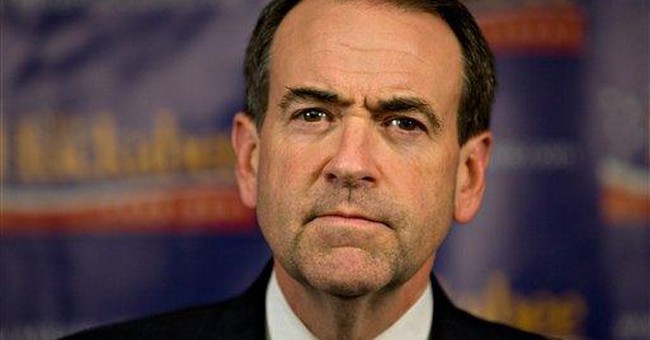 Mike Huckabee’s 3:1 win over John McCain in Kansas this weekend sends a loud warning to the Arizona senator – and allows the glib Arkansan to justify remaining in the presidential race. As the sole remaining credible competitor to McCain in the primaries, Huckabee is likely to continue to win delegates, as the vessel through which disgruntled Republicans can send a message about their discontent with the party’s likely nominee.

Speaking as he does of “miracles,” Mike Huckabee must understand that it would require one for him to win the 2008 nomination – he would have to secure 93% of the remaining delegates. So clearly, he’s remaining in the race for another reason. By raising his delegate count above Mitt Romney’s, second only to McCain’s, Huckabee may well hope that he is establishing himself as the putative frontrunner the next time a Republican presidential field assembles.

Ironically, however, Huckabee may be playing it too clever by half. He's already managed to stir resentment on the part of many conservatives for the way he worked in conjunction with McCain to knock Romney out of contention (and most of those opposing McCain vociferously aren’t any fonder of Huckabee). Now, he may earn the enmity of moderates for hassling McCain. That doesn't leave a huge future constituency for the smooth-talking governor, whose candidacy is already handicapped by the perception that he's a regional candidate whose appeal is primarily restricted to evangelical Christians.

Certainly, if Mike Huckabee has proved anything, it’s that he’s willing to exploit any division in the Republican Party in order to advance his own aims. In an effort to defeat Mitt Romney, a Mormon, he was willing to label himself a “Christian leader,” introducing elements of sectarian faith into a political system that has benefited from an unspoken consensus that sincerely held religious differences should not be capitalized upon for electoral gain.

Now, for the sake of his own ambition, he’s once again exacerbating divisions in the Republican Party, this time ideological. Senator John McCain already has much work to do in convincing conservatives, who have rightly resented his condescension and antagonism in the past, that he merits their support. The time and money that McCain must spend combating Huckabee in upcoming primaries rather than working to gain that trust is time and money poorly spent.

None of this would matter, of course, except that issues of national import rest on McCain’s ability to unite the party. His success in reaching out to disenchanted conservatives could affect the future viability of the GOP. Should a split between party regulars and conservatives occur, not only are Republicans consigned to a long period in the wilderness – conservatives themselves will likewise lose their most effective means for enacting their agenda. Even more importantly, the outcome of the upcoming presidential contest has dramatic implications for success in the war on terror, as Mitt Romney recognized last week when he said:

I disagree with Senator McCain on a number of issues, as you know. But I agree with him on doing whatever it takes to be successful in Iraq, on finding and executing Osama bin Laden, and on eliminating Al Qaeda and terror. If I fight on in my campaign, all the way to the convention, I would forestall the launch of a national campaign and make it more likely that Senator Clinton or Obama would win. And in this time of war, I simply cannot let my campaign, be a part of aiding a surrender to terror

There's no doubt that Huckabee has the right to stay in until the convention. But having the right to do something doesn't make it right to do. In placing his own ambitions above principle and party – as well as the national interest in winning the war on terror – Huckabee has made it clear: His character has less in common with that of the Republican former Massaschusetts governor who gracefully left the race last week than with his own Democratic predecessor in the Arkansas governor's mansion.