Where UNESCO and ISIS Converge

Caroline Glick
|
Posted: Apr 23, 2016 12:01 AM
Share   Tweet
The opinions expressed by columnists are their own and do not necessarily represent the views of Townhall.com. 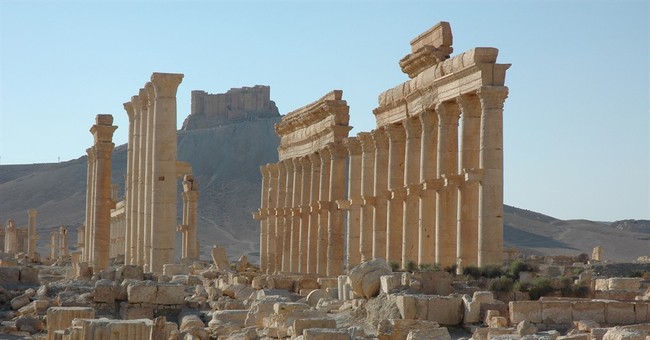 Bokova said Palmyra “carries the memory of the Syrian people, and the values of cultural diversity, tolerance and openness that have made this region a cradle of civilization.”

Bokova added, “The deliberate destruction of heritage is a war crime, and UNESCO will do everything in its power to document the damage so that these crimes do not go unpunished. I wish to remind all parties present of the absolute necessity to preserve this unique heritage as an essential condition for peace and the future of the region.”

Last week, UNESCO’s executive board passed a resolution unanimously outlining the steps the organization would take to rebuild the devastated site, whose major monuments were destroyed or damaged during the city’s 10 months under ISIS rule.

All of this, is all very well and nice.

The problem is that UNESCO commits the very crimes for which it condemns ISIS. Indeed, it committed the crime of seeking to wipe out history, whose preservation is “an essential condition for peace and the future of the region,” the day it passed its resolution on Palmyra.

Right after UNESCO’s board unanimously passed its resolution on Palmyra, it also passed a resolution whose goal is to erase Jewish history in the land of Israel.

The resolution, titled merely “Occupied Palestine,” (a country that doesn’t even exist), defined the Temple Mount, Judaism’s most sacred site, as an exclusively Muslim site. Jews who visit it were referred to derisively as “right wing extremists.”

The Western Wall, Judaism’s second holiest site, was similarly referred to as an exclusively Islamic site.

The resolution reinstated a previous resolution’s false claim that the tombs of the patriarchs and matriarchs of the Jewish people in Hebron and Bethlehem are mosques. The resolution, like the one from last week, was also a war crime, where UNESCO acted with malice to destroy the historical record.

In another act of cultural aggression, whose goal is to destroy the historical record, in last week’s resolution UNESCO falsely and maliciously referred to Jewish cemeteries as “fake graves,” in “Muslim cemeteries.”

And if that weren’t enough, UNESCO denounced Israel for the “conversion of many Islamic and Byzantine remains into so-called Jewish ritual baths or into Jewish prayer places.”

UNESCO’s acts are not the ravings of lunatic extremists or genocidal imperialists shouting about caliphates, crucifying and enslaving innocents. The latest resolution was sponsored by supposedly moderate Islamic countries, two of which – Jordan and Egypt – have peace treaties with Israel.

Support for the resolution wasn’t limited to Islamic countries voting as a bloc. France, Spain, Sweden, Slovenia, India, Russia and Argentina were among the nations who voted in favor of a decision that referred to the Western Wall in scare quotes.

The US sits on UNESCO’s executive board despite its open anti-Semitism. By doing so, the US grants legitimacy to a body which is waging a culture war against Israel no less determined – and arguably no less criminal– than ISIS’s war against all vestiges of non-jihadist culture in Syria, Iraq and throughout the world.

And why shouldn’t it act in this way? Much of the cultural elite in the Western world has joined UNESCO in its campaign to erase Jewish civilization from the historical and scientific record.

UNESCO’s culture war against Israel is of course led by the Palestinians. The entire Palestinian national narrative is based on a conscious cooptation and theft of Jewish history. The Palestinians themselves understand exactly what they are doing.

In 2011, The Guardian and al Jazeera published what they referred to as “the Palestine Papers.” The papers were taken from the PLO ’s negotiations support unit, charged with instructing Palestinian negotiators with Israel about their positions in the talks.

Among the papers was one that explained why the Jewish connection to the entire land of Israel – rather than just to Judea and Samaria – must be denied at all costs.

That document was nothing new. Rather, it was simply a restatement of the PLO Charter. The charter states, “Claims of historical or religious ties of Jews with Palestine are incompatible with the facts of history and the true conception of what constitutes statehood. Judaism, being a religion is not an independent nationality. Nor do Jews constitute a single nation with an identity of its own; they are citizens of the states to which they belong.”

He has repeatedly denied the historical record, proclaiming that there was never a Jewish temple in Jerusalem and that Jews have no history in the land of Israel.

No Palestinian leader has ever disagreed with him.

Rather, the PLO has a long, unbroken record of committing war crimes no different from ISIS’s in deliberately destroying Jewish antiquities, starting with the Temple Mount, which, since the PA was established in 1994 has been the focus of sustained campaign of destruction ordered by PA leaders and conducted by Palestinians.

Like the Temple Mount – the cradle not only of Judaism but of Christianity as well – so Jewish sites throughout Judea, Samaria and Gaza have been systematically plundered, torched, vandalized, turned into mosques and destroyed by the Palestinians, often acting on orders from the PA . The Shalom al Yisrael synagogue in Jericho was first destroyed immediately after the PA took control of the city in 1994. The same is the case of the ancient synagogue in Gaza. Joseph’s Tomb and in Nablus was torched and turned into a mosque.

In 2014 UNESCO declared the ruins of Bar Kochba’s fortress of Beitar a World Heritage Site. Except that they called it Battir. And they said it was a Roman site.

And they erased its Jewish roots, claiming the terraced agriculture the Jews of ancient Israel developed was a Roman innovation.

This is not surprising. The Times has repeatedly reported stories whose purpose is to erase the Jewish history of Israel. Last October, the Times published a story about the Temple Mount which cast aside mountains of evidence, gathered over decades by professional archaeologists, in order to question whether the Jewish temples were really located there.

In elite universities, students receive doctorates and go on to receive tenure despite, or perhaps due to their publication of politicized research, which free from evidence, demonizes Israel and Israelis as colonialist implants with no history or rights to Israel.

For instance, in 2007, Barnard College granted tenure to Nadia Abu El-Haj. In 2001, El-Haj, an anthropologist with no training or experience in archaeology, published Facts on the Ground: Archaeological Practice and Territorial Self-Fashioning in Israeli Society.

In her book, El-Haj alleged that Israeli archaeologists have deliberately falsified their findings. El-Haj claimed that the artifacts and sites they discovered and excavated were actually Islamic but the Jews hid the evidence. Jews, she said, also destroyed Christian sites with bulldozers.

Harvard Professor James Russell referred to her book as “malign fantasy,” designed to demonstrate the “colonial essence” of Zionism by denying the history of “Jewish sovereignty and long historical presence.”

In so doing, they, like the governments that supported the UNESCO resolution denying Jewish history, and condemning Israel for stubbornly defending its heritage, and like the New York Times and other elite publications that publish as fact Palestinian historical falsehoods, are committing the same war crime that ISIS committed in Palmyra. They are, in Bokova’s words, engaging in “the deliberate destruction of heritage.”

Just as Bokova pledged to document all of ISIS’s war crimes against ancient heritage sites “so that these crimes do not go unpunished,” so Israel should document the actions of UNESCO and its allies that aid and abet the destruction of Jewish heritage sites.

History itself will convict them.