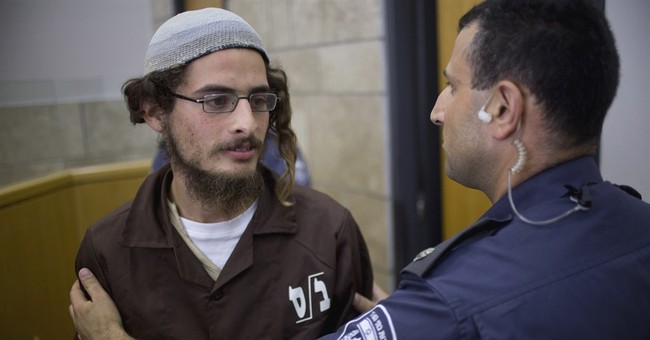 This past July, unknown assailants threw a firebomb into the home of the Dawabshe family in Duma. The mother, Reham and the father Saad along with their eighteen month old baby Ali were killed. Four year old Ahmed was critically injured.

Authorities immediately alleged that the assailants were members of a Jewish terrorist organization. The accusations were widely disregarded by members of the national religious camp, and by the Right, more generally. But following news that Jewish suspects were arrested for the crime earlier this month, those early allegations ring truer than before.

The Right had good reason to raise an eyebrow at the allegations. The IDF, the Shin Bet and state prosecutors have a long history of open discrimination against the Right.

Raviv and his colleagues had for years sought to entice members of the community to carry out acts of politically motivated violence. And when all else failed, he formed a fake terror group and invited reporters to film its fake swearing in ceremony.

The Shin Bet’s history, along with the IDF’s Central Command’s longstanding policy of portraying alleged Israeli vandalism of Palestinian property as the moral equivalent of Palestinian terrorism against Israelis has led many law abiding citizens on the Right to take allegations regarding Jewish terrorist cells with a grain of salt.

But this week we learned that this time the allegations may well be true. Just as bad, this week we discovered that not only do Jewish terrorists exist, they have supporters.

Wednesday night Channel 10 broadcast a video of young people dancing at a recent wedding in Jerusalem. The wedding was of friends of the men recently arrested on suspicion of involvement in the murder of the Dawabsheh family. Rather than dance around the bride and the bridegroom, as is the custom at Jewish weddings, wedding guests held up rifles, guns, Molotov cocktails and knives and danced around a photo of baby Ali Dawabshe.

The message was clear. The guests at the wedding weren’t waiting for indictments or a court verdict. They were sure their friends murdered the Dawabshehs – including their baby – and they supported the murder.

Here is the place to note that the suspects are innocent until proven guilty. The film is not evidence of guilt.

But the video does show that Jewish terrorists have supporters and those supporters believe that child killers are heroes.

Among those supporters are hundreds of people who have tried to shift the discussion from the act of terrorist murder the suspects are alleged to have committed to a discussion of allegations made by their attorneys, that since their arrest the alleged Jewish terrorists have been tortured by their investigators.

How are we supposed to react to those who rush to every open microphone and accuse the state of torturing the terror suspects, rather than consider, for a moment, what these men are suspected of having done? How are we to react to people who, even in the presence of evidence insist that the state is completely evil and the suspected terrorists are simply victims of discrimination?

Those who blithely accuse counter-terror investigators of torturing terror suspects while ignoring evidence and the nature of the crime itself, are terror apologists. In behaving as they do, they serve as the moral equivalent of anti-Zionist leftists from Breaking the Silence and its sister groups who libel Israel internationally.

Both groups of terror apologists use anti-Jewish rhetoric to harm the Jewish state. Both groups libel Israel with false allegations of torture that neither would dare to raise against any other country.

There are of course difference between the two groups.

The ultimate goal of such groups is the destruction of Israel. They seek Israel’s destruction because they believe that Israel is illegitimate and should be replaced by a non-Jewish state of one sort or another.

Unlike their leftist counterparts, terror apologists on the Right do not receive foreign funding. They do not direct their actions to international audiences.

They don’t seek the adulation of the likes of Roger Waters or John Kerry. They don’t encourage Europe to wage economic warfare against Israel or the US to abandon Israel at the UN. They don’t legitimize Arab terrorism.

Their target audience is the Israeli public. They wish to convince the public to accept the legitimacy of the Jewish terrorists by painting them as victims.

By falsely accusing the state of committing torture, right wing terror apologists are advancing the cause of the terrorists just as surely as Breaking the Silence members advance the cause of Palestinian terrorists when they disseminate their blood libels about IDF “war crimes,” to European and US audiences.

Given the similarity of their actions and goals, it should be clear that terror apologists on both sides of the spectrum must be shunned.

This brings us to the nature of the terrorism that these apologists justify.

In two key ways they do differ. First there are the numbers. Whereas there may be a few hundred Israelis who have joined terror cells, tens of thousands of Palestinians are members of terror groups in Judea and Samaria alone. Gaza of course, is governed by a terrorist group.

Second, there are their support bases.

Jewish terrorists are condemned and rejected by every major and minor political force in Israel. Although their support base may have grown in recent years, it still numbers no more than a few thousand people, on the fringes of society.

In stark contrast, the Palestinian Authority and all private and public Palestinian institutions of note lionize Palestinian terrorists. Jailed terrorists and their families receive generous governmental compensation. The general public views them as national heroes and children are taught from preschool on to follow in their footsteps and kill Jews in order to destroy Israel.

Wednesday, as Israel’s entire rabbinical and political leadership stood as one and condemned the wedding guests who glorified Jewish terrorists on the video, Fatah – the terror group and political party led by PA Chairman Mahmoud Abbas – published a post on its Facebook page praising the terrorist murderers who the same day killed two Israelis and critically wounded a third outside the Jaffa Gate in Jerusalem.

For counterterror and law enforcement bodies, fighting Jewish terror poses the same challenges as fighting Islamic terrorism. In both cases, the central challenge is to target and arrest terrorists and infiltrate their networks while continuing to respect the civil rights of the surrounding population.

In both cases, when investigators are contending with active terror networks, they are sometimes compelled to use unpleasant interrogation techniques. As numerous courts, ministerial oversight committees and the Knesset have determined, these techniques are not torture. They are legitimate interrogation methods and they are used sparingly and only when they are required to protect the public from terrorists who target the innocent.

There can be little doubt that Jewish terrorism would be far easier to fight today if the Shin Bet and the state prosecutors had not made malicious use of agent provocateurs to demonize the national religious camp in the 1990s. So too, if IDF commanders and the Civil Administration were less quick to support anti-Israel European funded NGOs against Jewish communal interests in Judea and Samaria today, community members would have less trouble believing the worst about Jewish extremists at the fringes of society. Indeed it would be far more difficult for overzealous defense attorneys to convince anyone that suspected terrorists have undergone torture.

But while the public has legitimate grounds for suspicion, it is no longer possible to dismiss the allegations of Jewish terrorism. There are members of the nationalist camp that wish to destroy Israel. They are willing to commit terrorist attacks against Arabs as well as Jews to achieve their goals.

In recent years, as the movement to delegitimize Israel from the Left has gained momentum, Prime Minister Binyamin Netanyahu has taken to referring to Israel as “the one and only Jewish state.”

But today his characterization of Israel rings true. Indeed, it is a reminder of what we can lose, and what we must do everything we can to defend.

We have but one Jewish state. And we will never have another one.