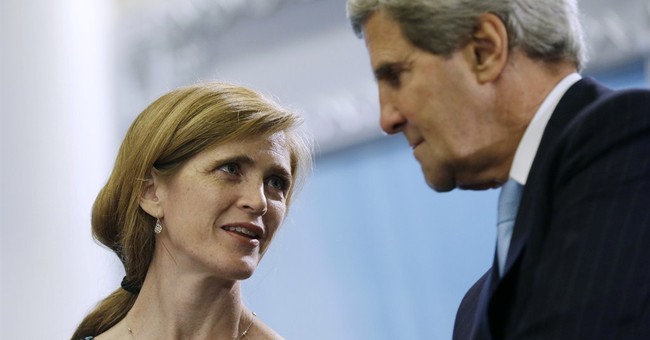 In testimony last week before the House committee in charge of State Department funding, US Ambassador to the UN Samantha Power acknowledged that the Obama administration intends to abandon the US’s 50 year policy of supporting Israel at the United Nations.

After going through the tired motions of pledging support for Israel, “when it matters,” Power refused to rule out the possibility that the US would support anti-Israel resolutions in the UN Security Council to limit Israeli sovereignty and control to the lands within the 1949 armistice lines – lines that are indefensible.

Such a move will be taken, she indicated, in order to midwife the establishment of a terrorist-supporting Palestinian state whose supposedly moderate leadership does not recognize Israel’s right to exist, calls daily for its destruction, and uses the UN to delegitimize the Jewish state.

In other words, the Obama administration intends to pin Israel into indefensible borders while establishing a state committed to its destruction.

Clearly, developing the means to cope with our deteriorating relations with the US is one of the most urgent issues on the agenda. But it is not the only issue requiring the attention of our leaders.

Israel must quickly determine clear strategies for contending with the consequence of US’s strategic shift away from its allies: Iran’s nuclear project. It must also determine the principles that will guide its moves in contending with the regional instability engulfing or threatening to engulf our Arab neighbors.

As tempting as it may be to believe that all we need to do is wait out Obama, the fact is that we have no way of knowing how the US will behave once he has left office.

The Democratic Party has become far more radical under Obama’s leadership than it was before he came into office. Hillary Clinton may very well become the next president, particularly if Jeb Bush is the Republican nominee. And she has evinced no significant interest in moving the party back to the center.

As secretary of state during Obama’s first term in office, Clinton was a full partner in his foreign policy. Although she appears less ideologically driven than Obama, there are many indications that her basic world view is the same as his.

Moreover, the world has changed since 2009. The Middle East is far more volatile and lethal. The US military is far less capable than it was before Obama slashed its budgets, removed its most successful commanders and subjected its troops to morale-destroying mantras of diversity and apologetics for Islamic terrorism.

In light of these changed circumstances, there are in essence two major principles that should guide our leaders today. First, we need to reduce our strategic dependence on the US. Second, we need to expand our policy of openly and unapologetically making the case for our positions to the American public.

On the first score, the need to limit our dependence on US security guarantees became painfully obvious during Operation Protective Edge last summer.

Obama’s interference in military-to-military cooperation between the Defense Ministry and the Pentagon, and his decision to implement an unofficial arms embargo on Israel in the middle of a war, was a shocking rebuke to the powerful voices inside the IDF General Staff and in policy circles that Israel can and must continue to trust the US to back it up in crises.

Our need to limit our dependence on the US to the greatest practicable degree will have consequences on everything from our domestic military production and development industries to intelligence and operational cooperation with the US and other governments.

It is imperative as well that we develop a plan to wean ourselves off of US military aid within the next three-five years.

Netanyahu’s critics continue to attack him for his decision to abandon the longstanding policy of settling disputes with the US administration through quiet diplomacy. They blame Netanyahu’s decision to publicly air Israel’s opposition to Obama’s nuclear diplomacy for the crisis in relations. But they are confusing cause and effect.

Netanyahu had no choice.

Obama has made clear through both word and deed that he is completely committed to a policy of reaching a détente with Iran by enabling Iran to join the nuclear club. He will not voluntarily abandon this policy, which his closest aides have acknowledged is the signature policy of his second term.

Under these circumstances, it has long been clear that quiet diplomacy gets Israel nowhere. Open confrontation with the administration is the only way that Israel can hope to limit the damage the administration’s policies can cause. By publicly laying out its positions on issues in dispute, Israel can provide administration critics with legitimacy and maneuver room in their own critiques of Obama’s policies.

The public debate in the US regarding Obama’s policy of appeasing Iran was transformed by Netanyahu’s speech before the joint houses of Congress last month. Before he came to town, most of the voices in the US warning against Obama’s nuclear diplomacy were dismissed as alarmist. Netanyahu’s speech changed the discourse in the US in a fundamental way. Today, Obama’s nuclear deal with Iran is highly controversial and unpopular.

And this brings us to the second burning issue the next government will need to contend with immediately upon entering office: Iran.

Since word of Iran’s nuclear weapons program got out more than a decade ago, Israel has operated under the assumption that a sufficient number of members of the policy community in Washington were committed to a policy of preventing Iran from acquiring nuclear weapons to make the abandonment of that policy politically impossible. Netanyahu’s strategy for dealing with Iran’s nuclear program has centered on convincing those policy-makers to take action, whether through sanctions on Iran or through other means that would make it impossible for Obama to conclude a deal with Iran that would give the nuclear program an American seal of approval.

In recent weeks, we have seen the collapse of that assumption. The Senate’s feckless handling of Obama’s nuclear accommodation of the world’s leading state sponsor of terrorism exposed Israel’s operating assumption as overly optimistic. So the policy must be updated.

An updated policy must be based on two understandings. First, the US will not stop Iran from acquiring nuclear weapons.

Second, due to Obama’s commitment to nuclear accommodation of Iran, at this point unless Iran’s nuclear installations are destroyed through military force, it will become a nuclear power. Israel’s survival will be compromised and a nuclear arms race throughout the region will ensue.

Given this reality, Israel’s public diplomacy should no longer be viewed as a means to prevent Iran from becoming a nuclear power. Rather, Israel should view it as a means to empower American lawmakers and others to stand with Israel in the event that it carries out military strikes against Iran’s nuclear weapons.

Open support for Israel by the US public and by politicians and media organs will make it more difficult for the administration to harm Israel in retribution for such action.

As for the strike itself, both the operational and diplomatic aspects of a military action must be calculated to make the most of the changing regional dynamics.

Last summer, in fighting Hamas in Gaza, Israel found itself acting in alliance with Egypt, Saudi Arabia, Jordan and the United Arab Emirates against Hamas, Qatar, Turkey and the US. The Arab states served as Israel’s blocking backs. They enabled Israel to withstand massive pressure from the administration that sought to coerce Israel into ending the fighting on Hamas’s terms.

In recent weeks, the media in Egypt and Saudi Arabia have expressed support for an Israeli strike on Iran’s nuclear installations. This support will be helpful in the aftermath of any such strike as well, and will again make it difficult for Obama to take revenge on Israel. Moreover, Israel must capitalize on these states’ opposition to Iran’s nuclear weapons program in order to convince them to provide operational support for Israeli forces attacking Iran.

This of course brings us to the third major issue on the next government’s agenda: formulating principles to govern our relations with the Arab world.

One thing is obvious. The goal that informed all previous governments in the past – that Israel’s top goal should be to sign peace deals with our neighbors – is irrelevant.

Our neighbors are all engulfed in wars or crises spurred by domestic opponents. These opponents have embraced al-Qaida and Islamic State and consequently, their domestic disputes with their leaders have been transformed into existential struggles between Islamic totalitarianism and regular authoritarianism.

Israel’s policy to date for handling these affairs has been to support the Egyptian military government and the Jordanians and to prevent Iranian proxies in Syria from directly attacking Israel. This policy is correct and should remain in place. But Israel also needs to adopt policies that will enable it to protect itself in the absence of friendly regimes in Amman and Cairo.

Gaza is a base for the global jihad and is a threat to Israel and Egypt alike. It has to be understood and treated as such.

In short, under the current circumstances, just as the notion of sitting down and signing a peace deal with Syria or Saudi Arabia is absurd, so the notion of reaching a peace deal with the Palestinians is a throwback to an entirely different time. Today the only way to keep the Palestinians of Judea and Samaria separated from the chaos and jihad in neighboring states is to make them part of Israel. As a preparatory step toward that goal, the next government must act to more fully integrate Arab Israelis into Israeli society.

To this end, Netanyahu would do well to appoint a Muslim Arab minister to his government charged with integrating the Arabs more fully into Israeli society.

The world has changed since 2009. America has changed. The Middle East has changed. Israel faces an array of challenges and threats it has never faced before. The next government must understand the dynamics of the situation and quickly forge policies based on the world as it is, not as it was or as we would like for it to be.