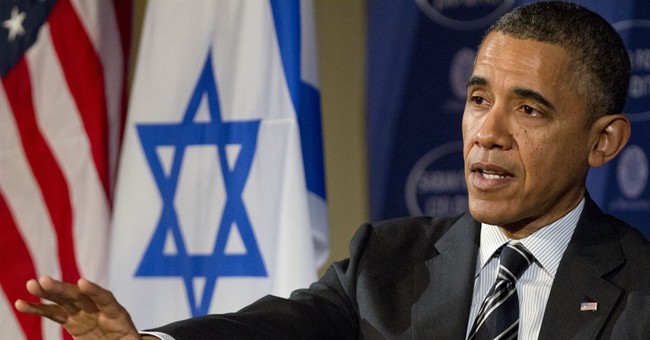 Inadvertently, President Barack Obama just made an important contribution to our understanding of the Palestinian conflict with Israel.

Since Hamas ousted all PLO forces from the Gaza Strip in 2007, Gaza has operated as a separate political entity from Judea and Samaria. Indeed, it has been a de facto independent Palestinian state, controlled by Hamas. Gaza’s only connection to Judea and Samaria has been financial. Every month, the PLO-controlled Palestinian Authority in Judea and Samaria transfers tens of millions of dollars in US and other international donor funds to Gaza to finance the terror state.

>Despite the clear distinction between the two areas, the US and the rest of the world have continued to insist that an Israeli-PLO peace deal will cover Gaza as well as Judea and Samaria. Obama always insists that a future Palestinian state must be “territorially contiguous,” meaning in a final deal Israel will be required to cut itself in half in order to give the Palestinians a land corridor connecting Gaza with Judea and Samaria.

But during his remarks at the Saban Forum on Saturday, Obama let the cat out of the bag. Gaza, he admitted, is a separate entity. A peace deal, he explained, “is going to have to happen in stages.”

Obama explained, “If there is a model where young Palestinians in Gaza are looking and seeing that in the West Bank Palestinians are able to live in dignity, with self-determination, and suddenly their economy is booming and trade is taking place because they have created an environment in which Israel is confident about its security and a lot of the old barriers to commerce and educational exchange and all that has begun to break down, that’s something that the young people of Gaza are going to want. And the pressure that will be placed for the residents of Gaza to experience that same future is something that is going to be I think overwhelmingly appealing.”

Before considering whether Gazans will likely behave as Obama expects them to, we need to consider the implications of his assertion that Gaza will not be automatically included in a peace deal.

Israelis and Palestinians engage one another for different reasons. Israelis are told we need to engage the Palestinians because they pose a demographic threat to our continued viability as a Jewish state.

In his remarks at the Saban Forum, Secretary of State John Kerry claimed that the Palestinian “demographic time bomb” is an existential threat on the level of Iran’s nuclear weapons program. If we don’t vacate Judea and Samaria as we vacated Gaza, he warned, we will be doomed as a Jewish nation state.

For the Palestinians, the peace process is supposed to lead to a satisfaction of their assumed yearning for self-determination as a nation.

Israeli demographics and Palestinian nationalism have been the basic assumptions upon which the peace process has been based. But the Obama-recognized fact that Gaza is a separate political entity demonstrates the emptiness of both.

The truth is that the “demographic time bomb” is a PLO-concocted lie. In its 1997 census, the PLO falsified its data and inflated the number of Palestinians by 50 percent. They then projected natural growth and immigration rates that bore no relation whatsoever to reality.

In truth, demography is one of Israel’s strongest advantages, not an existential threat. Were Israel to absorb the Palestinian populations of Gaza and Judea and Samaria tomorrow, Israel’s Jewish majority would be reduced from 78% to well over 50%. While Israel’s Jewish identity would not be in doubt, it would be weakened.

On the other hand, without Gaza, there is no demographic threat to Israel’s Jewish majority. If Israel applies its sovereignty over Judea and Samaria and offers a path to citizenship to its Palestinian residents, Israel would still retain a two-thirds Jewish majority. And if current fertility and immigration rates hold, within 15 to 20 years, Jews could well restore their 80 percent majority overall.

Then there is the Palestinian nationalism issue.

Obama’s acknowledgement that Gazans will have to be convinced to join a Palestinian state in Judea and Samaria exposes the lie at the heart of it. Since the League of Nations assigned both sides of the Jordan River to the Jewish people in 1922, the international community has insisted that the path to peace will be forged by taking land from the Jews and giving it to the Arabs.

First we had a two-state solution when Jordan, with its overwhelming Palestinian majority, was carved out of the Jewish territory.

For the past 20 years, we have been told that we need a three-state solution with another Palestinian state in Judea, Samaria and Gaza.

Since the Israeli withdrawal from Gaza, we have had two Palestinian states – in Gaza and Jordan. And yet, the Gazans who we are told are motivated by nationalist aspirations have refused to declare an independent Palestinian state in Gaza. And now Obama is talking about a four-state solution – three Palestines and one rump Israel.

And that brings us to Obama’s projection that once the Gazans see how great things are in post-Israel Judea and Samaria, they will join the peace train. We’ve been told things like this before.

In 1993 we were told that the Palestinians as a whole would embrace peace once Israel recognized the PLO and allowed it to set up an autonomous government in Judea, Samaria and Gaza. In the event, the Palestinians became more violent and radicalized and anti-Jewish under PLO rule, until in 2006 they elected Hamas to lead them.

In 2007, after Hamas ousted the PLO from Gaza, we were told that the international community would pour so much money into the PLO-run PA in Judea and Samaria that the Gazans would decide that they want the PLO back. Instead, Hamas has grown more popular in Judea and Samaria.

In other words, there is no reason to think Obama’s sunny projection is correct.

Clearly without meaning to, Obama told us the truth.

There is no demographic time bomb. Israel has no reason to withdraw from Judea and Samaria. Absorbing the areas into sovereign Israel will not endanger the country demographically.

And the fact that the Gazans do not see themselves as part of a Palestinian state in Judea and Samaria, (or in Jordan), shows that the Palestinian national movement is not what it has been billed as. Obama’s four-state solution is not about demography or Palestinian nationalism. It is about making up reasons to force Israel to surrender its strategic and historic heartland.