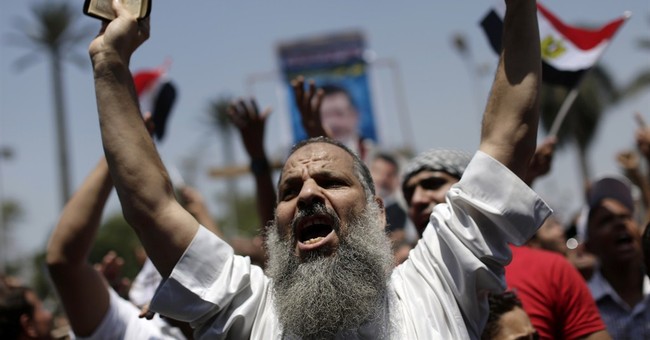 On Wednesday, Egypt had its second revolution in as many years. And there is no telling how many more revolutions it will have in the coming months, or years. This is the case not only in Egypt, but throughout the Islamic world.

The American foreign policy establishment's rush to romanticize as the Arab Spring the political instability that engulfed the Arab world following the self-immolation of a Tunisian peddler in December 2010 was perhaps the greatest demonstration ever given of the members of that establishment's utter cluelessness about the nature of Arab politics and society. Their enthusiastic embrace of protesters who have now brought down President Mohamed Morsi and his Muslim Brotherhood regime indicates that it takes more than a complete repudiation of their core assumptions to convince them to abandon them.

US reporters and commentators today portray this week's protests as the restoration of the Egyptian revolution. That revolution, they remain convinced, was poised to replace long-time Egyptian leader and US-ally Hosni Mubarak with a liberal democratic government led by people who used Facebook and Twitter.

Subsequently, we were told, that revolution was hijacked by the Muslim Brotherhood. But now that Morsi and his government have been overthrown, the Facebook revolution is back on track.

And again, they are wrong.

As was the case in 2011, the voices of liberal democracy in Egypt are so few and far between that they have no chance whatsoever of gaining power, today or for the foreseeable future. At this point it is hard to know what the balance of power is between the Islamists who won 74 percent of the vote in the 2011 parliamentary elections and their opponents. But it is clear that their opponents are not liberal democrats. They are a mix of neo-Nasserist fascists, communists and other not particularly palatable groups.

Egypt's greatest modern leader was Gamal Abdel Nasser. By many accounts the most common political view of the anti-Muslim Brotherhood protesters is neo-Nasserist fascism.

Nasser was an enemy of the West. He led Egypt into the Soviet camp in the 1950s. As the co-founder of the Non-Aligned Movement, he also led much of the Third World into the Soviet camp. Nasser did no less damage to the US in his time than al-Qaida and its allies have done in recent years.

Certainly, from Israel's perspective, Nasser was no better than Hamas or al-Qaida or their parent Muslim Brotherhood movement. Like the Islamic fanatics, Nasser sought the destruction of Israel and the annihilation of the Jews.

Whether the fascists will take charge or not is impossible to know. So, too, the role of the Egyptian military in the future of Egypt is unknowable. The same military that overthrew Morsi on Wednesday stood by as he earlier sought to strip its powers, sacked its leaders and took steps to transform it into a subsidiary of the Muslim Brotherhood.

Second, Egypt will be politically unstable.

Mubarak was able to maintain power for 29 years because he ran a police state that the people feared. That fear was dissipated in 2011. This absence of fear will bring Egyptians to the street to topple any government they feel is failing to deliver on its promises - as they did this week.

Given Egypt's dire economic plight, it is impossible to see how any government will be able to deliver on any promises - large or small - that its politicians will make during electoral campaigns.

And so government after government will share the fates of Mubarak and Morsi.

Beyond economic deprivation, today tens of millions of Egyptians feel they were unlawfully and unjustly ousted from power on Wednesday.

The Muslim Brotherhood and the Salafists won big in elections hailed as free by the West. They have millions of supporters who are just as fanatical today as they were last week. They will not go gently into that good night.

Finally, given the utter irrelevance of liberal democratic forces in Egypt today, it is clear enough that whoever is able to rise to power in the coming years will be anti-American, anti- Israel and anti-democratic, (in the liberal democratic sense of the word). They might be nicer to the Copts than the Muslim Brotherhood has been. But they won't be more pro-Western.

They may be more cautious in asserting or implementing their ideology in their foreign policy than the Muslim Brotherhood. But that won't necessarily make them more supportive of American interests or to the endurance of Egypt's formal treaty of peace with Israel.

And this is not the case only in Egypt. It is the case in every Arab state that is now or will soon be suffering from instability that has caused coups, Islamic takeovers, civil wars, mass protests and political insecurity in country after country. Not all of them are broke. But then again, none of them have the same strong sense of national identity that Egyptians share.

Now that we understand what we are likely to see in the coming months and years, and what we are seeing today, we must consider how the West should respond to these events. To do so, we need to consider how various parties responded to the events of the past two-and-a-half years.

Wednesday's overthrow of the Muslim Brotherhood government is a total repudiation of the US strategy of viewing the unrest in Egypt - and throughout the Arab world - as a struggle between the good guys and the bad guys.

Within a week of the start of the protests in Tahrir Square on January 25, 2011, Americans from both sides of the political divide united around the call for Mubarak's swift overthrow.

A few days later, President Barack Obama joined the chorus of Democrats and Republicans, and called for Mubarak to leave office, immediately. Everyone from Sen. John McCain to Samantha Power was certain that despite the fact that Mubarak was a loyal ally of the US, America would be better served by supporting the rise of the Facebook revolutionaries who used Twitter and held placards depicting Mubarak as a Jew.

Everyone was certain that the Muslim Brotherhood would stay true to its word and keep out of politics.

Two days after Mubarak was forced from office, Peter Beinart wrote a column titled "America's Proud Egypt Moment," where he congratulated the neo-conservatives and the liberals and Obama for scorning American interests and siding with the protesters who opposed all of Mubarak's pro-American policies.

Beinart wrote exultantly, "Hosni Mubarak's regime was the foundation stone - along with Israel and Saudi Arabia - of American power in the Middle East. It tortured suspected al- Qaida terrorists for us, pressured the Palestinians for us, and did its best to contain Iran.

And it sat atop a population eager - secular and Islamist alike - not only to reverse those policies, but to rid the Middle East of American power. And yet we cast our lot with that population, not their ruler."

Beinart also congratulated the neo-conservatives for parting ways with Prime Minister Binyamin Netanyahu who counseled caution, and so proved they do not suffer from dual loyalty.

Israelis watched in shock and horror as their American friends followed the Pied Piper of the phony Arab Spring over the policy cliff. Mubarak was a dictator. But his opponents were no Alexander Dubceks. There was no reason to throw away 30 years of stability before figuring out a way to ride the tiger that would follow it.

Certainly there was no reason to actively support Mubarak's overthrow.

The Muslim Brotherhood believed that the way to gain and then consolidate power was to hold elections as quickly as possible. Others wanted to wait until a constitutional convention convened and a new blueprint for Egyptian governance was written. But the Muslim Brotherhood would have none of it. And Obama supported it.

Five months after elections of questionable pedigree catapulted Morsi to power, Obama was silent when in December 2012 Morsi arrogated dictatorial powers and pushed through a Muslim Brotherhood constitution.

Obama ignored Congress three times and maintained full funding of Egypt despite the fact that the Morsi government had abandoned its democratic and pluralistic protestations.

He was silent over the past year as the demonstrators assembled to oppose Morsi's power grabs. He was unmoved as churches were torched and Christians were massacred. He was silent as Morsi courted Iran.

US Ambassador to Egypt Anne Patterson and Obama remained the Muslim Brotherhood's greatest champions as the forces began to gather ahead of this week's mass protests. Patterson met with the Coptic pope and told him to keep the Coptic Christians out of the protests.

Obama, so quick to call for Mubarak to step down, called for the protesters to exercise restraint this time around and then ignored them during his vacation in Africa.

The first time Obama threatened to curtail US funding of the Egyptian military was Wednesday night, after the military ignored American warnings and entreaties, and deposed Morsi and his government.

This week's events showed how the US's strategy in Egypt has harmed America.

In 2011, the military acted to force Mubarak from power only after Obama called for it to do so. This week, the military overthrew Morsi and began rounding up his supporters in defiance of the White House.

Secretary of State John Kerry was the personification of the incredible shrinkage of America this week as he maintained his obsessive focus on getting Israel to make concessions to the Palestinians.

In a Middle East engulfed by civil war, revolution and chronic instability, Israel is the only country at peace. The image of Kerry extolling his success in "narrowing the gaps" between Israel and the Palestinians before he boarded his airplane at Ben-Gurion Airport, as millions assembled to bring down the government of Egypt, is the image of a small, irrelevant America.

And as the anti-American posters in Tahrir Square this week showed, America's self-induced smallness is a tragedy that will harm the region and endanger the US.

As far as Israel is concerned, all we can do is continue what we have been doing, and hope that at some point, the Americans will embrace our sound strategy.