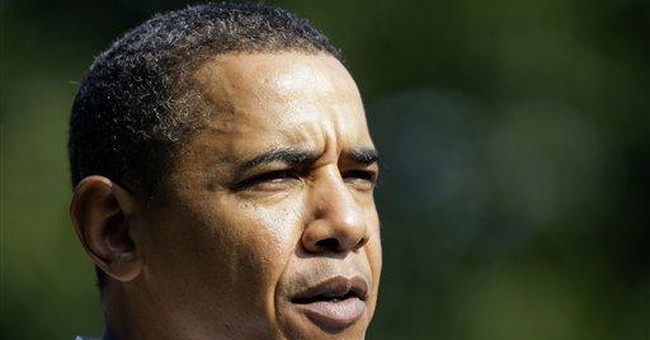 On Tuesday the Guardian reported that the Obama administration is now making Israel an offer it can't refuse: In exchange for a government order to freeze construction for Jews in Jerusalem, Judea and Samaria, the administration will adopt a "much tougher line with Iran over its alleged nuclear weapons program."

Israel should refuse this offer.

What the Guardian account shows is an Obama administration looking to blame Israel for the failure of its policy of attempting to appease the likes of Iranian dictator Ayatollah Ali Khamenei and President Mahmoud Ahmadinejad.

Come September, US President Barack Obama is going to have a difficult time of it. He set a September deadline for his strategy of diplomatically courting the mullahs. This policy involves deferring further sanctions against Teheran and all but openly renouncing the option of using military force to destroy Iran's nuclear installations while waiting politely for the mullahs to sit down for tea with US officials.

Far from accepting Obama's offer, the Iranians have spit on it. Indeed, they have been too busy brutalizing their own people and building bombs and missiles to even respond to him directly. Instead, they have signaled their contempt for Obama by promoting known arch-terrorists to high office. For instance, Ahmadinejad just appointed Ahmad Vahidi, the suspected mastermind of the 1994 bombing of the AMIA Jewish center in Buenos Aires that killed 85 people and the 1996 Khobar Towers bombing in Saudi Arabia where 19 US servicemen and women were murdered to serve as defense minister.

In support of Obama's appeasement efforts, both the House and the Senate Foreign Relations committees set aside veto-proof bills that would place sanctions on companies exporting refined fuel to Iran. But Congress, now on summer recess, reconvenes in September and members are anxiously awaiting a green light from the White House to put the bills before a vote.

So unless something saves him, Obama will look like quite a fool next month. His appeasement policy has given the mullahs eight precious months of unimpeded work at their nuclear installations. Their uranium enrichment facility at Natanz is now operating some 5,000 centrifuges, with another 2,400 centrifuges about to go on line. That is an eightfold increase in centrifuge activity from a year ago.

Obama now turns to Israel to avoid embarrassment. If he can convince Prime Minister Binyamin Netanyahu that the White House will only get serious about Iran's nuclear weapons program if Netanyahu freezes Jewish building in Judea, Samaria and Jerusalem, then Obama can present his sudden willingness to sign on to veto-proof congressional sanctions legislation not as a consequence of his own failure, but as a result of Israeli pressure.

If Obama succeeds in getting Netanyahu on board, the American media discussion of sanctions will focus on the issue of Israeli power over US policy. The so-called Israel lobby will be pummeled as pundits argue about whether Obama was right or wrong to succumb to Israeli pressure to support congressional sanctions. No one will remember that Obama was forced to support the sanctions because he had no other choice, since next month his engagement policy will become indefensible.

On the other hand, if Israel refuses to play ball and doesn't provide Obama with a concession which he will be "forced" to pay for with a harder line on Iran, then he will still have to adopt a harder line. In this case, however, it will be attributed to the failure of his appeasement policy toward Iran rather than to the success of his Middle East diplomacy against Israel.

Obama's apparent interest in setting Israel up as the fall guy for the failure of his engagement policy is the same policy he will doubtless follow if matters continue on course and Teheran acquires nuclear weapons. At that point, Obama can be counted on to claim that it was Israel's recalcitrance in the negotiations with the Palestinians or the Syrians or the Lebanese that forced the mullahs' hands. That is, he will say it is the absence of "progress" in the "peace process" due to whatever imagined Israeli intransigence that made it impossible for the Iranian "moderates" to convince the "hardliners" to give up their nuclear weapons program.

In Obama's defense, it should be noted that at least he worries about being embarrassed by the failure of his Iran policy. He knows that the overwhelming majority of Americans consider Iran to be an enemy of their country. In a poll of US voters taken in May, some 80 percent of Americans claimed that a nuclear-armed Iran would constitute a threat to US national security and 57% said that Israel would be justified in launching a preemptive strike against Iran's nuclear installations.

Things are different on the other side of the Atlantic. Obama's European counterparts do not face a comparable situation. They have no reason to fear being embarrassed when and if Iran emerges as a nuclear power, because their constituents view Israel as threat equal to or greater than Iran.

European politics - particularly as they relate to the Middle East - are not informed by rational interests so much as they are defined by attitude. Facts today mean little in Europe. They are easily crushed under the weight of the fantasies that dominate European political discourse.

The main fantasy governing Europe's attitude toward the Middle East is the belief in Israeli militaristic venality, fundamentalist messianism, and territorial greed. It is this fantasy that protects European leaders from the need to account for their six years of failed appeasement toward Iran, during which Iran has made its swiftest progress toward completing its nuclear weapons program.

It is the predominance of anti-Israel attitudes throughout the continent that enables European leaders to make light of the Iranian nuclear threat even as ever growing swathes of the continent fall within the range of the Islamic republic's ballistic missiles.

A mere glance at the daily Middle East coverage of your standard European newspaper suffices to demonstrate the depths of Europe's obsession with hating Israel. The absence of peace is always Israel's fault. The fact that the Arabs have never accepted Israel's right to exist is either whitewashed or justified. So too, Arab terrorism is explained away while every act - small and large - that in any way asserts Israel's right to defend itself is pounced upon as proof of Israel's criminality and brutality.

Case in point is an interview Intelligence Minister Dan Meridor gave to Der Spiegel's diplomatic correspondent Erich Follath ahead of Netanyahu's visit to Germany this week. The entire interview consisted of interchanges like the following:

Follath: You blame Palestinian intransigence [for the absence of peace]. Western leaders are, of course, demanding that the Arab side compromise on some issues. But they are also putting pressure on Israel to make concessions, as well, especially when it comes to its aggressive settlement policy in the West Bank.

Follath: You don't regard new settlements in the occupied territories as being a major stumbling block in the peace process?

Meridor: That's exactly why we aren't building new settlements. We haven't approved any.

Follath: You are sidestepping the issue. US President Barack Obama wouldn't urge Israel to stop its settlement policies if he didn't have a reason to do so...

Follath's questions, and his dogged determination to ignore everything that Meridor said reflect this general European propensity to embrace the fantasy of Israeli criminality over the reality of Israeli willingness to do just about anything for peace.

Israel has for years based its public diplomacy regarding Teheran's nuclear weapons program on successive governments' assessments that given Iran's global reach and the threat it poses to global security, states will be more willing to act to prevent it from acquiring nuclear weapons than they are to acknowledge Palestinian terrorism which is employed almost exclusively against Israel. What Israeli leaders - including Netanyahu - have failed to recognize is that the antipathy of Europeans toward Israel is so great that they are willing to explain away Iran's nuclear weapons program because it is aimed first of all against Israel.

Case in point is yet another screed by Follath published in Der Spiegel in June. There he characterized Netanyahu and Ahmadinejad as "twins," who are united in their "apocalyptic religious visions."

As Follath sees it, both are equally responsible for the rising likelihood of war between Israel and Iran that is liable to suck in countries around the region and the world. As far as he - and his loyal readers - are concerned, Israel and Iran deserve each other.

Such views inevitably temper any propensity European leaders may have to act against the Islamic republic. This was demonstrated by German Chancellor Angela Merkel during her appearance with Netanyahu in Berlin on Thursday. Merkel rejected Israel's comparison of Iran's stated aim of destroying Israel to the Shoah, saying, "There is no comparison between the Holocaust and the Iranian nuclear program."

If there is no comparison, then Germany, which she claimed is duty bound to defend Israel due to the Holocaust, has no obligation to prevent Iran from becoming a nuclear power.

But if Merkel is wrong, and as a result of the lackadaisical attitude she, her European colleagues, and the Obama administration have adopted, Iran acquires nuclear weapons and as promised, uses them to commit a new genocide of Jewry, she has no reason to worry. The anti-Israel attitude now rampant in Europe will ensure that she will pay no price, and will not even be embarrassed for her failure to heed the warnings.

Case in point is the newest Swedish media blood libel against Israel, and the numerous blood libels - most prominently France 2's Muhammad al-Dura blood libel from September 2000 - that preceded it. Stories like Aftonbladet's fiction of IDF theft of Palestinian organs and France 2's false allegation that the IDF murders Arab children sell newspapers and raise television ratings because the popular animus against Israel is so great that people are willing to buy newspapers and watch television networks that propagate obvious lies that feed this irrational hatred. Indeed, it pays to disseminate such lies.

The lesson of all of this for Israel is clear. Whether Netanyahu is dealing with Obama or European leaders, the game is rigged against us. Any move that Israel makes toward these leaders will simply facilitate their further castigation of the Jewish state and support their clear intentions to do nothing to prevent Iran from acquiring the means to destroy Israel.

As we have been all too often in our history, today Israel stands alone against our enemies. We can either defeat them, or we can be defeated. The choice is ours.