Carl Jackson
|
Posted: Apr 23, 2018 12:45 PM
Share   Tweet
The opinions expressed by columnists are their own and do not necessarily represent the views of Townhall.com. 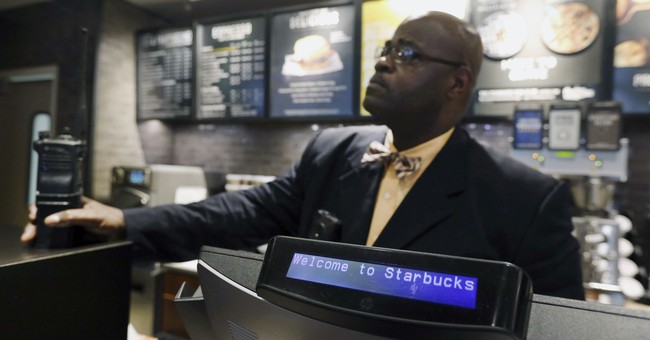 In 2016, I walked into a Starbucks in Hollywood, California and asked for a code to use their restroom. I was initially denied access by a black male barista because I hadn’t purchased anything, so I bought a drink. Later, that barista explained to me they enforced the policy to prevent the homeless from taking “bird baths” in their restrooms. Was that barista racist or sexist?

Starbucks is finding out that leftism has no allies - just a collection of useful idiots. Starbucks has successfully created a culture and atmosphere for clientele willing to pay their high prices for coffee. Loiterers endanger that culture.

Have you ever stopped to consider what racism at a Starbucks might look like? I imagine their baristas would refuse to serve minorities coffee – they certainly wouldn’t hire minorities. Perhaps, there’d be separate restrooms and seating areas for blacks and whites. Regardless of what we might see were this establishment institutionally racist, what we wouldn’t see is a white manager eager to serve her customers and follow policy, by asking two black men “may I get you a cup of coffee or kick rocks” – I’m paraphrasing.

By accepting the premise that Rashon Nelson and Donte Robinson were asked to leave a Philadelphia store and then subsequently detained by cops because of their skin color, Starbucks CEO Kevin Johnson did the black community and the nation a disservice by going on his apology tour.

For one, he gave blacks permission to scream “racism” based upon feelings, not facts. Additionally, young blacks who are living in an era in American history where true racism is the exception and not the rule, he’s given them an excuse to blame life’s setbacks on their race rather than their effort. There’s no boogie man holding you back in America today.  What Kevin Johnson doesn’t realize is that it’s impossible to police feelings. Thanks to our Constitution and civil rights leaders like Martin Luther King Jr., we can correct wrongful behavior through law and societal pressure. Race relations have been stunted for a decade because of Johnson’s actions.

Let’s be honest, Millennial blacks have not and will not experience slavery or Jim Crow laws like our ancestors. Thus, there’s no form of reparations or appeasement that will satisfy young blacks that have been taught by white liberals that microaggressions and white privilege are proof of racism. You can’t fight an enemy you don’t see or rectify a problem when an offense is left to one’s own imagination. Subjective truth isn’t truth.

Here are three reasons why closing 8,000 stores for a partial day of “racial-bias training” for their employees will do nothing to improve race-relations in America or Starbucks’s bottom line:

Kevin Johnson’s apology tour is silly and will do nothing to heal race relations in America. Ultimately, he’ll keep race-baiters employed, and blacks angry. Great job at keeping us divided Mr. Johnson.