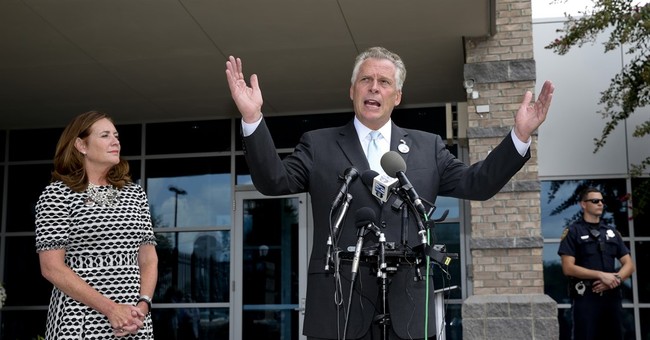 I'm sorry for your loss, Mr. Parker. I can't imagine what it must be like to lose a daughter to a racist homicidal maniac, but your mourning doesn't nullify my rights. Particularly, when your focus on gun control solely addresses a symptom of gun violence in America while ignoring several culturally terminal diseases - immorality, criminality, insanity and black racism.

Andy Parker, father of slain Roanoke, Virginia TV reporter Alison Parker, took to the airwaves last week vowing to become the John Walsh of gun control. He even was so bold as to take the NRA to task for a stance on gun ownership they don't even hold - allowing the mentally insane to purchase guns. Additionally, he's teamed up with President Barack Obama and Virginia Gov. Terry McAuliffe (D-Va) in hopes of reforming gun ownership laws. Ironically, subsequent to his NRA rant, Mr. Parker explained to a group of reporters outside of the Roanoke television station where his daughter worked that he may have to purchase a gun for his own protection after placing lawful gun enthusiasts like myself in his crosshairs. How ridiculous!

The people Andy Parker should be worried about are the #BlackLivesMatter (I prefer "#BlackLivesMadder") terrorists, the left-wing media and people like President Obama who perpetuate racial hostility in the culture by giving credence to accusations of racism in instances where it doesn't exist! These are the people responsible for creating an atmosphere where the ticking time bombs that played a role in the executions of Alison Parker, Adam Ward and Texas' Harris County Sheriff's deputy Darren Goforth find their sick twisted purpose.

Guns are one of many weapons of choice used by violent criminals to kill people when the perpetrator doesn't value life. There are many weapons available for individuals who have lost sight of the value of life. For instance, Planned Parenthood prefers a vacuum and a scalpel. Therefore, rather than focusing on some of the instruments of death as the left wants us to, let's look at the four aforementioned cultural diseases that are currently endemic in America:

1) Immorality: How can we expect people to behave morally when we've told our citizens God doesn't exist, or that He's not crucial to maintaining a civil society? Or, that He belongs exclusively behind church walls but not in the public square? Without a source for objective truth to righteously judge right from wrong and good from evil, heinous crimes will continue to happen. People mentally capable of determining right from wrong need to know that if you kill someone you will be judged in this life as well as in the life to come.

2) Criminality: "More dads, fewer delinquents" should be one of our nation's mottos. The black community is all too familiar with this truth, but whites and Latinos are quickly catching up. When the Democratic Party first replaced daddy with Uncle Sam under FDR's New Deal followed by LBJ's Great Society I'm not sure they could've planned the breakup of so many intact families if they had tried. Too many of our young men are trying to find their purpose in the streets because there's no father to guide them in the home.

3) Insanity: How we address the mentally insane in America isn't as much of a "who" problem, as it is a "when" problem. Political correctness and affirmative action in the workplace has become a place of refuge for the insane, instead of a mental hospital where they belong. Left-wing policies have created perpetual victimhood for the likes of people such as the Roanoke killer Vester Lee Flanagan. When colleagues observe serious warning signs that a co-worker is insane they shouldn't fear retribution for sharing their concerns to higher authorities.

4) Black Racism: I've heard it said, "when a white cop kills a black suspect it's racism, but if a black suspect kills the white cop he's criminally insane." Listen, God is the only one capable of knowing a man's heart. If you hate people because of their skin color you're a racist no matter what color you are, and no matter how much institutional-power you claim to lack. God judges the heart not your position.

Let's call Vester Lee Flanagan what he was -- a racist, evil, homicidal maniac. The same could be said for Officer Darren Goforth's executioner, Shannon J. Miles. Now let's call the #BlackLivesMadder campaign what they've become -- a racist movement. Mr. Parker and leftist opportunists like President Obama, Gov. Terry McAuliffe and Hillary Clinton may claim they want to stop gun violence in America, but that will be impossible to do as long as they continue to set their sights on law abiding citizens while giving the real criminals a pass.