Social Issues Are The GOP's Gateway To The Ghetto 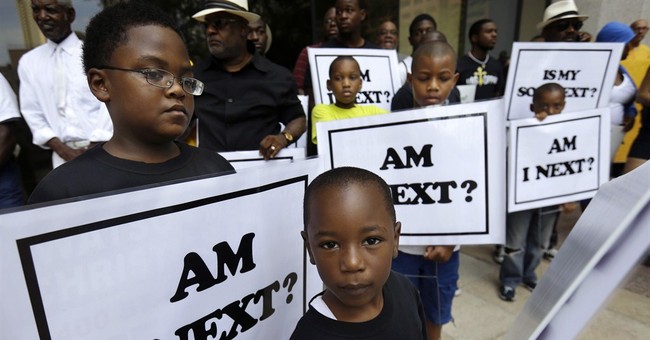 No one grows up with aspirations of government dependency. Social issues give Conservatives the perfect opportunity to prove they’re the big brothers to Americans and not the bullies. Can you imagine what America might look like today if the first Republican president, Abraham Lincoln, had not taken on the social issues of his day, slavery and polygamy?

Imagine being the parents of Sandra Fluke as you observe your child beg for subsidized condoms on national television during the 2012 DNC. How disappointing. No father tells his son "work hard, go to college and get on food stamps as soon as possible." No little girl wearing a princess dress and a blinged out plastic tiara dreams of marrying her prince charming then aborting her firstborn. Leftist are transforming our men into boys, our women into usable goods, and their favorite targets are minorities.

According to BlackGenocide.org, 78% of Planned Parenthood clinics are located in minority communities. Who's going to fight against the existential threat that's being perpetrated against my people due to the Left's social policies? Republicans used to be the definitive answer.

Welfare, chronic poverty, and moral decadence are by-products of the left's social issues and not vice-versa. In other words, democrats sell welfare under the guise of "help," knowing their programs create perpetual government dependency rather than improve the lives of their constituents. Democrats vote for their leaders because they believe they "care" about the personal plight of "the little man" - social issues.

I'm dumbfounded when I hear some of my fellow Republicans say "stay away from the social issues." As if the Democrat platform is about anything but social issues! Whether it be civil rights, equitable pay in the workplace, "women's rights" - aka abortion - or gay marriage, Democrats often win votes by capturing the hearts, ire and imagination of their constituents. To be frank, the Left has successfully courted Hispanic and black communities because they run towards social issues, not away from them!

Hard core leftists will never agree with Conservatives on entitlements. However, the two issues the GOP have in common with most minority groups are freedom of religion, and love of family. These issues serve as a bridge to the hearts and minds of those that often disagree with us on numerous policy issues.

If you've read my bio you know that I'm a former liberal. What you may not know is that it was a social issue that led me on my journey to conservatism- father's rights. Mired in a long and arduous custody battle (seven years on and off) for my child, my political philosophy began to evolve from left to right. I began expecting a miracle from God rather than government. Once I personally experienced government overreach in the courtroom, it wasn't a far stretch to believe that my political worldview was suspect.

Consequently, I began questioning virtually everything Democrats would say. I even went so far as to begin reading black conservative authors such as Frederick Douglass (oldie but goodie), Larry Elder, Star Parker, Thomas Sowell, Rev. Jesse Lee Peterson, and Walter Williams. I learned about the Negro Project, and eugenicist, racist and founder of Planned Parenthood Margaret Sanger for the first time. Thanks to others like Michelle Malkin, and David Barton of Wall Builders, who's in depth research connected the dots between American history (including black republican congressman during Reconstruction I never knew existed), leftist lunacy of the day, and the lefts co-opting of civil rights, the scales quickly began to fall from my eyes. I was enraged that I had supported the very policies as Margaret Sanger. I attribute much of my ignorance white liberal propaganda and guilt that plagued my school textbooks and media.

I felt as though I was discovering America for the first time. It wasn't long before I could no longer justify much of what I once believed with my newly found Christian faith, as well as a fresh knowledge of history. In all conceivable matters, intact families and marriage, economically and spiritually, blacks were better off prior to the Democrats War On Poverty and Roe V. Wade. Don't you believe they deserve to know the truth?

As the old cliché goes, "people don't care how much you know until they know how much you care." Social issues, when communicated effectively, proves we care.