Carl Horowitz
|
Posted: Feb 26, 2021 12:01 PM
Share   Tweet
The opinions expressed by columnists are their own and do not necessarily represent the views of Townhall.com. 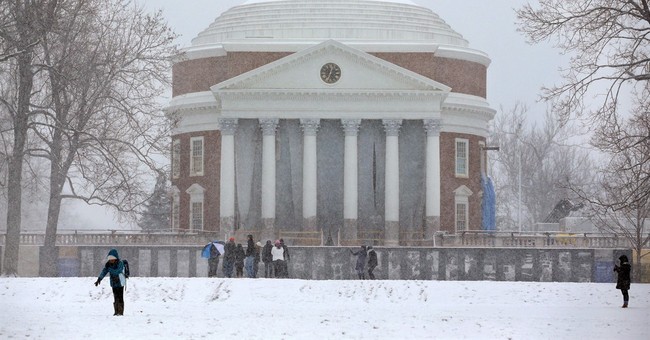 If it were possible for each of us to trace our ancestry by millennia, it’s a fair bet that everyone in the world would be able to find slaves somewhere. But should such genealogical discoveries be a basis for a college scholarship? Costly, unconstitutional and wacky as the idea seems, many lawmakers in Virginia think it is. And it soon may become law.

On February 5, the Virginia House of Delegates voted 61-39 to approve a bill (HB 1980) that would require the state’s five colleges and universities established before 1865 – the University of Virginia, Virginia Commonwealth University, Virginia Military Institute, Longwood University, and the College of William & Mary – to offer four-year full scholarships and other grants to applicants who can prove descent from slaves who had worked as builders, maintenance workers or groundskeepers at these institutions. The bill’s sponsor, Delegate David A. Reid (D-Loudoun County), who is white and a career Navy man to boot, calls passage “a small but important step to acknowledge and address that the foundational success of five universities was based on enslaved labor.”

The bill, in other words, mandates reparations. And when it comes to reparations, “small” steps have a way of becoming big ones. That all the slave owners and slaves in Virginia are long deceased makes no difference to zealots like Reid. Neither does the possibility that not all the slaves were black (a great many slaves in the New World in fact were white). The only qualification to receive a scholarship is an ability to show descent from slaves.

The vetting process, needless to say, would be time-consuming. That’s why the bill requires that affected colleges and universities work with the Virginia State Council for Higher Education in constructing family trees of the laborers. In the case of the University of Virginia, for example, an estimated 4,000 to 5,000 living persons would qualify for scholarships.

If the bill passes the Virginia Senate and is signed into law by Governor Ralph Northam, who is a reparations advocate, the program would take effect in the 2022-23 academic year. Affected institutions would not be allowed to cover program costs via state subsidies or tuition hikes; they would have to tap into endowments or private funds. In addition, these institutions must build a memorial to enslaved laborers on former and current “institutionally controlled grounds and property.”

A few schools have gotten a head start in the latter endeavor. The College of William & Mary, in obsequious fashion, is creating a $2 million memorial to slave laborers, set for completion by the end of 2022. Brian Coy, a University of Virginia spokesman, notes his school has “already undertaken a number of initiatives to reckon with our own history of slavery and segregation, as well as the continuing societal impacts of those institutions.”

Supporters rationalize this shakedown by claiming that Virginia’s colleges and universities, if not the state itself, owe their existence to slavery. “Virginia wouldn’t exist without the labor of enslaved people,” remarks Delegate Reid. “All of our higher ed institutions have benefited from this history.” This is nonsense. Excellence in higher education, whether in Virginia or elsewhere, is the result of a sustained commitment to teaching, research and community service. It has nothing to do with slavery, past or present.

Meanwhile, a descendant of University of Virginia slave laborers, Myra Anderson, offered this slice of moral browbeating. “This university flourished based on their [her relatives’] blood, sweat, tears and labor, so I see that offering scholarships is a way to create an educational atonement because there’s nothing that can be done to compensate for slavery.” For the record, a sixth great-uncle of Ms. Anderson, Thrimston Hern, was sold by the estate of Thomas Jefferson in 1827. That apparently qualifies her for a full-ride college scholarship.

As Democrats currently control the Virginia Senate by a 21-18 margin, this legislation may become law. Whatever the outcome, it should be understood in the context of the campaign for monetary reparations payable by whites to blacks. Corporations, state governments, churches and other institutions increasingly are hopping aboard this bandwagon. My monograph published last year by National Legal and Policy Center, Slavery Reparations: Revival of a Bad Idea, dissects the misleading nature of this campaign.

Congress, led by Rep. Sheila Jackson Lee, D-Tex., this January reintroduced a reparations bill (H.R. 40), the Commission to Study and Develop Reparation Proposals for African-Africans Act. This measure has been kicking around continuously since 1989, but it may succeed this time. At this writing, it has nearly 175 House co-sponsors. President Biden announced his support for a commission a year ago while on the campaign trail. Supporters speak of the “debt” being in the trillions of dollars. That would cover many scholarships, among other taxpayer-funded giveaways.