There Will Be Corruption: How Oil, Labor, and Government Mix in Mexico 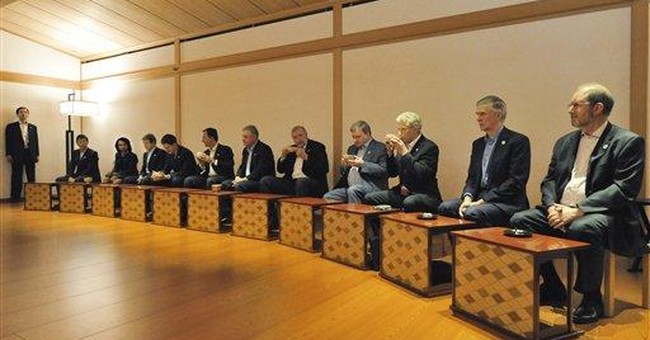 Unless one has been in hiding these past few months, the most defining aspect of our daily national life, beyond the inevitable rah-rah of the presidential campaign, has been soaring crude oil prices, manifested in $4 per gallon-plus prices at the retail gasoline pump. Countless explanations can be offered for this turn of events. Yet one in particular merits more attention: corruption in the oil industry south of the border.

For better or worse, Mexico is America's third-largest foreign supplier of crude oil, right behind Canada and Saudi Arabia. This cauldron of political instability provides us with around 1.25 million barrels a day, a figure down by around 200,000 from a year ago. Corruption, including from within the union representing most oil workers, has a lot to do with the drop -- and likely future drops.

It's been a fact of life for 70 years: Mexico's oil industry is a state-run monopoly. Back in 1938, in a pique of nationalist fervor, their government, led by President Lazaro Cardenas, expropriated (i.e., stole) the assets of American and Anglo-Dutch petroleum companies against whom Mexican workers were striking. The government quickly reorganized this wealth into an entity called Petroleos Mexicanos, or more simply, Pemex. Just to make sure the company wouldn't get any ideas about asserting its independence, the government amended its constitution of 1917, granting to itself complete authority over the processing and distribution of oil and natural gas. Each year, believe it or not, Mexicans celebrate the date of this event -- March 18 -- as a national holiday. It's called Oil Expropriation Day.

The enforced commingling of industry and state power has been a mixed blessing at best. Having been shielded from competition, Pemex has managed to incur high operating expenses, despite engaging in relatively little exploration. The result is an entire economy, and not just an industry, in perilous straits.

As Pemex goes, so goes the Mexican economy. The company generated nearly US$200 billion in revenues in 2006, making it the tenth-largest oil-based enterprise in the world. But there's a downside to this. About 60 percent of those revenues go for paying taxes and royalties to the Mexican government. Indeed, 40 percent of the government's revenues come from Pemex, most significantly a 71.5 percent levy on the value of all oil and natural gas produced. This alone puts the corporation at the whim of each successive six-year presidential administration. "It's effectively a government department of the moment," observes Matthew Shaw, senior Latin American analyst for the Edinburgh, Scotland-based energy industry consulting firm, Wood Mackenzie.

To understand oil corporatism, Mexican-style, it's necessary to grasp the role of organized labor. Pemex's work force in recent years has averaged about 150,000 employees, roughly three-fourths of whom belong to the Union of Oil Workers of the Mexican Republic. Yet collective bargaining, as we know it here in America, doesn't exist. There are a few reasons for this.

First, the distinction between firm, union and government is blurred. Of the 11 persons who sit on Pemex's board of directors, six also are members of the Mexican president's cabinet and the other five are union officials. Undoing this arrangement would require a constitutional amendment, and few people are willing to go that extra mile. That's one reason why Pemex executives seem to go through a revolving door. Over the past eight years, for example, the company has changed CEOs four times and chairmen five times.

Second, while Pemex has all the appearances of a real business, at least from the looks of its gleaming high-rise headquarters in Mexico City, the reality is that it isn't permitted to behave like one. Aside from paying heavy tribute to the government, the company doesn't have the freedom to hire and fire at will. Indeed, it often finds itself, thanks to union and government pressure, paying employees for doing little or nothing. Example: At the Pemex ammonia processing plant in Ciudad Camargo, closed for a half-dozen years, paid workers still show up, waiting for something to do. The concept of productivity doesn't seem to register. Worse yet, Mexico's Finance Ministry has the authority to set Pemex's prices, budgets and debt levels.

Third, efforts at reform are hardly a match for the political resistance. Mexico's previous president, Vicente Fox, learned the hard way. Things looked promising when he took office in December 2000. After all, he was the first president in over 70 years not to belong to the Institutional Revolutionary Party (PRI), long Pemex's prime benefactor. What's more, Fox knew the business world well, having served years earlier as a Coca-Cola executive. He had an ambitious agenda to modernize Pemex, vowing to bring in private investment, shift a portion of the tax burden onto non-Pemex sources, modify labor laws, and sell company stock to the general public. He appointed Raul Munoz Leos, at the time president of DuPont's Mexican operations, to head Pemex, with instructions to run it like a private company. But the reform effort went nowhere. Furious opposition from the union, Mexican Congress, the Finance Ministry and officials within the company made sure of that.

All of this has enabled union and company officials alike to treat Pemex like a private bank. And this bank has paid well, if not necessarily legally. Here are a few examples over the years of corruption on an eye-popping scale:

* In a scandal that came to be known as "Pemexgate," then-CEO Rogelio Montemayor Seguy approved as much as $200 million in questionable company payments to the union, most of which ended up in the PRI's 2000 election campaign war chest. Montemayor fled Mexico for the U.S., and eventually was arrested in Houston and extradited back to Mexico. He managed to avoid prison.

* A labor official, Jorge Diaz Serrano, went to prison in the 80s on charges that he'd pocketed tens of millions of dollars from a secret deal to buy oil tankers.

* Former union chieftain Joaquin Hernandez Galicia was convicted and sentenced to prison in 1989 after acquiring enough weapons to outfit a private army.

* Pemex employees routinely siphon off gasoline for personal use. Mexican officials estimate the annual value of lost sales at around $1 billion.

The company, put simply, is a racket, albeit one clothed in patriotism. One Pemex worker, on the condition on anonymity, recently explained it this way: "Pemex is a can of worms. If you do something right, they come after you; if you shut up about some irregularity, they reward you; and if you take part in corruption, you profit." Fox-era CEO Raul Leos stated that the proceeds from graft by company employees and union bosses were comparable to that of Mexican drug traffickers. He should know about corruption on a grand scale: In 2007 he was fined $80 million and banned from holding public office for 10 years for illegally transferring $170 million in Pemex funds to the oil workers union, plus another $12,500 to finance a more pressing domestic need -- his wife's liposuctions.

Corruption and its first cousin, inefficiency, are draining Pemex's coffers. It's a key reason why even as crude oil prices rose above $100 a barrel last year, the company actually went into the red. This has left less money available for investment in infrastructure and equipment. Worker safety has suffered accordingly, at times with tragic results. In October 2007, at least 21 workers were killed following a collision between the oil platform on which they were working and an undersea oil well. The workers drowned when their lifeboats broke up in a raging storm after they left the platform. Many persons in the aftermath accused the company of knowingly purchasing flimsy lifeboats to cut costs. As for infrastructure, this past spring Pemex had to shut down a leaking pipeline at its Ixtal oil field for a full month, a move that prompted the company to lower its overall annual production target by 6.5 percent. Such accidents have contributed to leaking revenues. Mexican Energy Minister Georgina Kessel estimates that Mexico is missing out on about 150 million pesos ($14.5 billion) of annual revenue due to shortfalls in production.

Reforming the Pemex behemoth is far easier said than done. Current President Felipe Calderon at least is taking tentative steps in that direction. Emulating Brazil's successful privatization program, he's urging the Mexican Congress to pass legislation enabling Pemex to establish performance-based contracts with private firms. Yet even though this initiative wouldn't apply to revenues from Mexican-produced crude oil, the union and the political Left have expressed vigorous opposition.

As for the political opposition, its most forceful voice is that of former Mexico City Mayor Andres Manuel Lopez Obrador, radical populist leader of the Party of the Democratic Revolution, who lost the 2006 presidential election to Calderon by a razor-thin margin (he insists to this day that he is the "legitimate" president). "Oil profit belongs to the Mexican people, and there's no reason to privatize it," he said at a February 11 press conference. He's also making veiled threats. At a February 24 rally before thousands in front of Pemex headquarters he warned privatization could lead to violence.

It's not as if violence hasn't happened already. On July 10, 2007, a domestic Marxist-Leninist guerrilla group, the Popular Revolutionary Army, claimed responsibility for separate explosions at Pemex pipelines that occurred that day and five days earlier. The upsurge in Leftist populism, in Mexico as well as in the rest of Latin America, is the unspoken reason why the Mexican government walks softly on the privatization issue. Current Pemex CEO Jesus Reyes Heroles began advocating loosening state controls only this past March, well over a year after his appointment.

The ultimate oil issue is the availability of oil itself, or more accurately, the ability of Mexico to acquire it. Industry experts believe about 30 billion barrels worth of crude oil lie beneath the deep waters of the Gulf of Mexico. Yet Pemex lacks the technology, money, and trained personnel to engage in deepwater exploration. And Mexico's constitution bars the company from entering into partnerships with foreign firms. Some analysts recently estimated that given the current rate of consumption, Mexico's oil production will last only 9.2 years and its exports will end even sooner. Even more optimistic assessments project production from Pemex's current oil fields to drop by 1.8 million barrels per day by 2021. The country is feeling the pinch. In April 2008, daily output fell to 2.77 million barrels, down from 3.18 million in April 2007. President Calderon knows what's at stake. In a recent televised address, he stated: "We must act now because time, and oil, is running out on us."

To make up for the projected 1.8 million barrel-a-day shortfall, company officials plan to step up production by 700,000 barrels in southeastern fields, 600,000 in Chicontepec, and 500,000 in deep water. Pemex also currently is drilling in an exploratory deepwater well in the Gulf called "Tamil 1." These are encouraging signs. Yet over the long run, the key to survival rests on breaking the plutocracy that lies at Pemex's foundations.

Record-high crude oil prices have been masking a potential disaster. Put another way, if prices were to dramatically drop, the Mexican government would have to increase subsidies to Pemex (the company needs $9 billion right now just to repair infrastructure), and raise taxes on everyone else, lest it be unable to provide many basic services. Take heed, America: Such a scenario may trigger even more immigration, including the illegal kind, to our country, in turn further raising pressure for amnesty. Mexico's oil industry corruption is our problem, not just theirs.